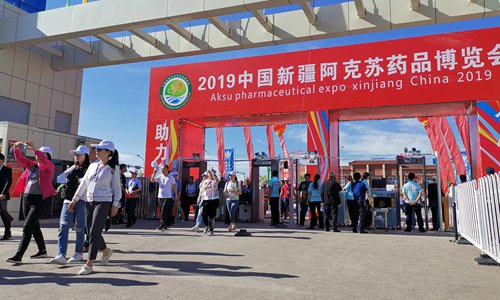 A border city in Northwest China's Xinjiang Uyghur Autonomous Region is eyeing the Central Asian markets for pharmaceutical products and equipment, after opening a regional drug distribution center and an industry expo to attract domestic and foreign companies.

As part of its broad push to boost the local economy, Aksu Prefecture, which sits on China's border with Kazakhstan and Kyrgyzstan, is counting on the Belt and Road Initiative (BRI) and strengthened diplomatic ties between China and its neighbors for fruitful cooperation.

After opening a large regional drug distribution center, Aksu kicked off its first pharmaceutical expo on Saturday, which was followed by activities including panel discussions and product promotions on Sunday. These events attracted many domestic and foreign companies and thousands of local residents.

"Through the drug distribution center, we will further utilize our advantage in resources, improve services and proactively develop and grow Aksu's pharmaceutical industry and make Aksu a drug and equipment trading center for not just south Xinjiang but Central and Western Asian countries," Niyazi Aximu, head of the Aksu regional administrative government, told an opening ceremony on Saturday.

Since it opened in July 2018, the Aksu Drug Distributing Center has attracted 87 pharmaceutical companies, which have brought around 5,000 types of medicine and 8,000 types of medical equipment, according to official data. Aksu invested 280 million yuan ($40.44 million) to build the center on the outskirt of the sprawling city.

The center has so far been focused on procurement for hospitals and drug stores in southern areas of Xinjiang. Within less than one year, combined sales by companies in the distribution center reached 1.3 billion yuan, with sales to public hospitals reaching 780 million yuan, official data showed.

"Improved efficiency and services of the platform will help companies like ours to expand markets and increase sales," Meng Linghong, a marketing director for Wego Group's medical equipment unit based in East China's Shandong Province, told the Global Times on Sunday.

Following the central government's push to increase support for companies as part of broad efforts to battle downward economic pressure, Aksu officials have also streamlined administrative procedures, improved services and offered policy and fiscal support to companies in the center, according to officials and companies.

"For small companies like ours, high-quality regulations and services are very important," Huang Yongchun, vice general manager of local medical products distributor Aksu Yonglinruifu Digital Technology, told the Global Times on Sunday. Huang noted that after entering the distribution center, officials have been supportive from regulatory oversight to policy guidance.

Although the distribution center has so far largely focused on the growing market in southern areas of Xinjiang, officials aim to expand its reach to a global market in Central and Western Asian countries.

"There is huge demand for pharmaceutical products in all these neighboring countries, particularly in Central and Western Asian countries, and helping companies to enter these markets is a very important job for us," Tang Yongtao, head of the Aksu Drug Distributing Center, told the Global Times on Sunday.

In 2018, China's medical exports to Western Asian countries grew by 110 percent to $460 million year-on-year and many countries in these areas still lack advanced medicines and medical equipment, a void that Chinese companies, with growing technological capabilities, could fill through Aksu, according to Tang.

To help pave the way for companies to enter these markets, the center has been establishing a bonded area in the region for pharmaceutical companies, building a local land port and talking with companies about specific strategies, according to Tang.

"With this help, we are looking to not only expand our business in Xinjiang but in neighboring countries as well," Meng with Wego Group said, noting that his company has already set up branches in many countries.

Cooperation mechanisms between China and Central and Western Asian countries under the BRI and close bilateral ties could also help Chinese companies in exploring the markets there, according to Tang.

"When the foundation for cooperation is set by leaders of the countries, our job becomes much easier, all we need to do is to follow up on those agreements," he said.

During state visits to Kyrgyzstan and Tajikistan, where he also attended the summits of the Shanghai Cooperation Organization and the Conference on Interaction and Confidence Building Measures in Asia, Chinese President Xi Jinping called for strengthened joint regional development, according to the Xinhua News Agency.