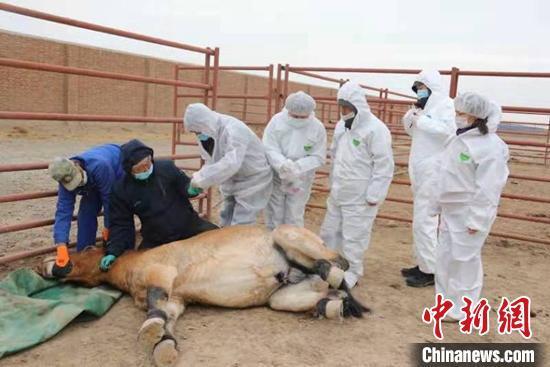 It has been the most comprehensive physical examination on wild horses since the center was established 34 years ago.

The blood routine examination and biochemical blood test can help researchers fully grasp the health status of Przewalski's horses, and the results can be widely used in clinical disease diagnosis, said Wang Jie, a senior veterinarian with Xinjiang Academy of Animal Sciences.

The health checks were jointly launched by Xinjiang Wild Horse Breeding and Research Center, Xinjiang Academy of Animal Sciences and the regional center for animal disease control and prevention.

The Przewalski's horse, named after its Russian discoverer, is an endangered species native to the desert grassland of Central Asia. It is considered the only wild horse in existence today.

Once extinct in China due to hunting and a deteriorating environment, the horses were reintroduced to the country in the 1980s from Europe and raised in Xinjiang and Gansu province. There are more than 2,000 Przewalski's horses in total worldwide.

Home to 482 Przewalski's horses, the Xinjiang breeding center is the largest wild horse breeding base in the world.