By Zhao Juecheng and | Global Times 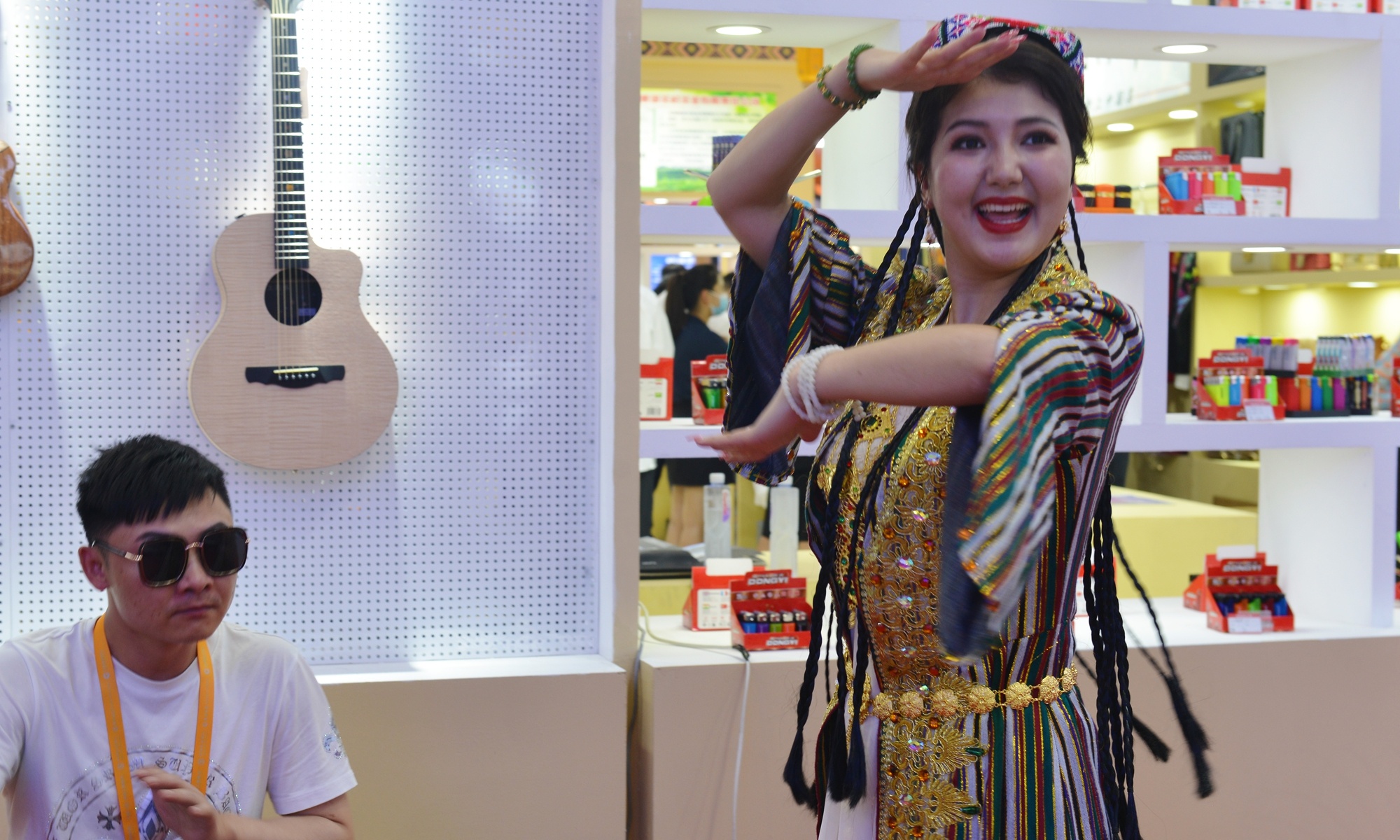 Constant smears, sanctions and suppression from the West against Northwest China's Xinjiang Uygur Autonomous Region, which target the region's pillar industries and aim to strangle local economic development, have not and will not dent local firms' push and confidence in their products or disrupt their pace going global, the Global Times learned during the ongoing China International Consumer Products Expo (CICPE), which runs from Friday to Monday in Haikou, South China's Hainan Province.

Over 600 cotton flowers were packed in an exquisite way and dispatched to visitors passing by the booths of Xinjiang firms as a souvenir. Visitors surrounded staff, stretching out their hands trying to get one. Some visitors who got the cotton flower quickly held it up and took selfies with the Xinjiang booth as a backdrop. Meanwhile, staff of ethnic minority danced to the music.

The white and high-quality Xinjiang cotton has been recognized by more consumers following recent Western attacks on the product, and it has become a highlight for the region during the expo. Five clothing and textile firms from Xinjiang participated in the trade fair, demonstrating the entire industry chain from raw materials to finished garments.

Yi Jing, deputy general manager of Siwei Textile from Awati County, Aksu Prefecture of Xinjiang, told the Global Times during the expo that she has read recent media reports regarding the West's attacks on Xinjiang cotton, but the US sanctions and boycotts from some foreign companies did not affect her business.

"We currently have 350,000 spindles and 1,050 air-jet looms, with an annual output of 150 million meters of fabric, which is still in short supply. The production has been scheduled to the end of June this year," Yi said, noting the CICPE has provided a good opportunity to introduce high-quality products made in Xinjiang to business people from home and abroad.

Xinjiang long-staple cotton, of the world's top quality, is grown in the county where Yi's firm is based. This type of cotton produced in the region accounts for about 93 percent of China's total output.

The long-staple cotton fiber is long and can be spun into high-count yarn. After a garment is made, it has a fine hand feel, good air permeability and a high level of comfort.

As China's top cotton production base, Xinjiang's annual cotton output is about 5.16 million tons, accounting for 87 percent of China's cotton output, and equivalent to 62 percent of national cotton consumption. Nearly 600,000 local people are now employed in the cotton industry.

Statements by Western companies including Swedish fashion retailer H&M and American sporting giant Nike claimed that they would not source cotton from Xinjiang citing the so-called "forced labor" situation. The incident sparked furor among Chinese netizens in March, who called for boycotting products of these brands.

At a press conference held in Beijing on April 30, officials from Xinjiang admitted that due to sanctions from the US and Western countries, some companies in Xinjiang saw decreases of overseas orders and some had difficulties regarding foreign exchange settlements.

However, they also said that these sanctions will not stop companies in Xinjiang as they are turning the pressure into a drive to promote quality and modern technologies.

A total of 184 firms from Xinjiang participated in the mega-expo including 48 firms from the Xinjiang Production and Construction Corps. They cover a wide range of sectors such as textiles, agricultural products, to cultural and creative products and other fields. Almost every company interviewed by the Global Times during the expo expressed their strong will to expand their presence in overseas markets.

Due to Xinjiang's landlocked geographical location, local companies take the expo as an opportunity that cannot be missed out to attract investment and explore export markets.

Huang Jinzhi, head of Gelinkai Eco Fruit Co, a firm mainly selling raisins and other fruits and can process nearly 1,000 tons of grapes each year, told the Global Times during the expo that she wanted to "test the waters" at the Hainan free trade port to see if any business opportunities can help open the market.

"We do not engage in low-end markets, but only produce high-quality products, which have been sold to first-tier cities such as Beijing, Shanghai and Guangzhou [capital of South China's Guangdong Province," Huang said.

Holding full confidence in Xinjiang-produced fruits, she hoped to explore export businesses via platforms like CICPE and the Canton Fair.

For Liu Yucai, a sales manager of Huihua Shengguo based in Qinghe County, Altay Prefecture, in northern Xinjiang, the journey to the Hainan consumer goods expo was a challenging one.

Qinghe County is located on the northeastern edge of the Junggar Basin and borders Mongolia. It only exited the ranks of impoverished counties in 2017.

"Our area is relatively remote and it is more difficult to attract investment, so I hope to take advantage of such a good platform to promote the company and products to the outside world," Liu told the Global Times at the booth.

His firm is mainly engaged in the research and development as well as production of sea-buckthorn products, including sea-buckthorn juice, raw juice, essential oils, capsules, tea, jam and dried fruits.

"We had exported sea-buckthorn berries to Russia, Kazakhstan and other countries. In the future, we hope to sell our products with added value abroad instead of just selling raw materials," said Liu.

China will not compromise on Xinjiang affairs, anti-China forces' attempts to use Xinjiang-related issues to thwart China's development are doomed to fail, analysts said, noting that the region will embrace long-standing prosperity with the development of the Belt and Road Initiative (BRI) and national support.

"The all-round opening up of Xinjiang, the advancement of the Belt and Road Initiative, and the fact that trade via China-Europe freight trains are growing at 170 percent annually have all paved a solid foundation for Xinjiang firms to go global," Yi of Siwei Textile said.

Vice Chairman of Xinjiang Uygur Autonomous Region Zhao Chongjiu said Friday at a promotion event during the CICPE that Xinjiang is open and inclusive. It borders eight countries, has 18 ports open to the outside world, and has launched platforms such as the China-Eurasia Expo and the Xinjiang International Dance Festival.

In August this year, Xinjiang will also hold the 2021 Eurasia Commodity and Trade Expo virtually.