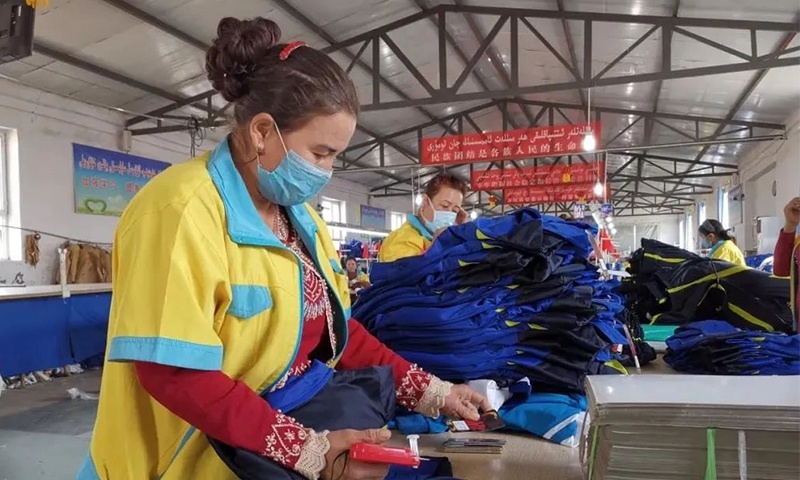 Local villagers who work at a clothing factory that's been closely linked to COVID-19 infections in a new outbreak in Shufu county of Kashi in Northwest China's Xinjiang Uygur Autonomous Region are well-paid employees, and the factory is nothing like a "forced labor camp" as portrayed by Western media.

In an exclusive interview with the Global Times, Abduryhit Abulmt, the head of the Third Village in Shufu county, refuted reports which claimed that the average working area for a worker at the factory of Shuchang Garment Co. is about two square meters, calling these reports "absolute nonsense."

Some journalists working for Western media always collaborate with foreign anti-China forces to slander and defame China. These irresponsible journalists should examine their conscience and ask themselves if they have professional ethics, as they continue to lie, Abduryhit said.

As of press time, Xinjiang had reported 45 confirmed COVID-19 cases in the latest outbreak, including three severe cases, and 138 asymptomatic infections, all of which were detected in Shufu county, Kashi Prefecture and linked to the factory.

The Shuchang garments company was established in 2018 and has helped solve local employment difficulties. The 252 local villagers chosen to work there and have equal opportunities are well paid, Abduryhit told the Global Times.

Most villagers were farmers with little income, but working in the factory earns them a stable monthly income ranging from 1,500 yuan ($223) to 3,000 yuan. The factory pays by piece-work, making their income dependent on how hard they work. The annual income of some households exceeds 60,000 yuan.

"People who try to defame China do not understand China and Xinjiang policies at all. The establishment of the factory has helped villagers step out of poverty. Through stable work and good pay, they now have a better life," Abduryhit said.

"Like any job, they chose to work at the factory, sign contracts with the factory, enjoy equal employment opportunities, and get paid," said Abduryhit.

Western media, including the BBC and the Washington Post, have fabricated reports stating that people are forced to work in Xinjiang clothing factories.

"Do they still have professional ethics as journalists? As representatives of grassroots townships, we strongly condemn such lies," Abduryhit proclaimed.

"The factory is making a good profit, with production capacity reaching more than 200,000 pieces a year. It has also its own brand, and their products are of high quality with low price, small profits but quick turnovers, making it very popular in the region and among customers," he said.

Abduryhit said the factory has two production workshops, each of which is more than 650 square meters, with a workspace of six square meters per worker, nothing like in the reports which claimed only two square meters for each worker.

Most workers are women and the factory has managers, technicians, drivers and security guards, and all of them are local villagers, said Abduryhit. A 17-year-old was the first reported asymptomatic case in Shufu, and her father works at the factory as a security guard.

The working hours are as same as any other job in Xinjiang. They work from 10 am to 2 pm before taking 90-minute break. Free lunch is provided by the factory. They return home after getting off work at 7:30 pm, Abduryhit said.

Since the start of the epidemic, the factory has implemented anti-epidemic measures such as testing workers for the coronavirus once a week. They wear masks while working, and get their temperatures checked before entering the plant, according to the local official.

An Yantao, the deputy secretary of the Zhanmin township Party committee in Shufu county, told the Global Times that the village tests key workers, including frontline medical staff, servers, market workers and drivers of public transportation, once a week, as a routine anti-epidemic measure.