Xinjiang govt urges EU to abandon sanctions, vows to 'fight back' against prejudice 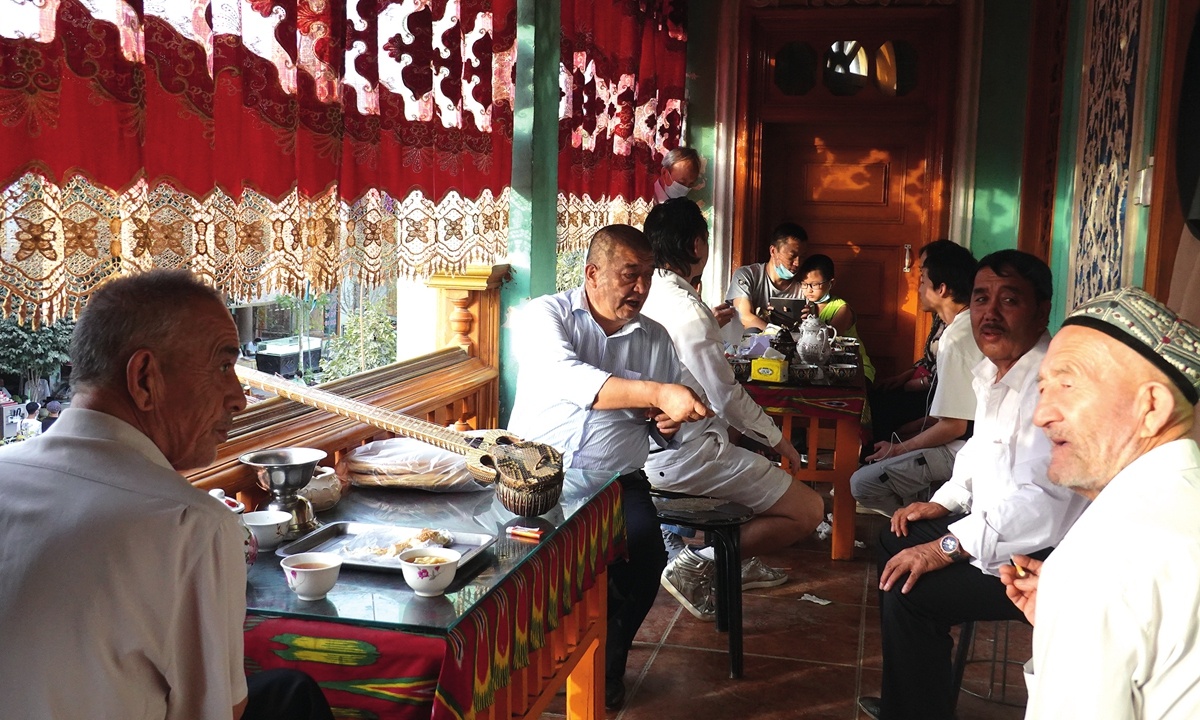 Men enjoy their time in a teahouse in Kashi, Xinjiang. (Photo: IC)

Xinjiang's regional government on Thursday urged the EU to abandon prejudice and recognize facts after the EU agreed on Wednesday to its first sanctions against China in three decades, citing "human rights concerns in Xinjiang." The regional government warned that "otherwise, the people of all ethnic groups in Xinjiang will resolutely fight back and fight to the end."

The regional government issued the warning at a press conference on Thursday. Experts said that the sanctions signal a tougher line toward China within the EU, aiming to show its impact by interfering in the internal affairs of other countries.

Xu Guixiang, deputy head of the Publicity Department of the Xinjiang Regional Committee of the Communist Party of China, said at the press conference that China firmly opposes any external force "wielding a big stick of sanctions" to grossly interfere in Xinjiang and China's internal affairs.

"If the EU imposes sanctions against China under a human rights banner, it will seriously affect mutual trust and cooperation between China and the EU, and seriously violate the purposes and principles of the UN Charter." Xu said.

"The EU should abandon prejudice, recognize the facts and stop going further down the wrong path. Otherwise, the people of all ethnic groups in Xinjiang will resolutely fight back and fight to the end," he said.

On Wednesday, EU ambassadors approved travel bans and asset freezes on four Chinese officials and one entity over Xinjiang issues, the bloc's first sanctions against China in three decades, Reuters reported, noting the list of names will be made public after formal approval by EU foreign ministers on March 22.

The EU sanctions came as a number of enterprises and individuals in Xinjiang launched lawsuits against Adrian Zenz, an infamous anti-China pseudo-scholar, who has produced multiple sensational "reports" on Xinjiang, and fabricated academic research in which he spread rumors such as large-scale monitoring of local ethnic minorities and forced labor.

Xu said that some foreign parliamentarians and media regarded Zenz's so-called "research" as a matter of fact without any investigation or verification, thus setting off an astonishing political disinformation campaign.

Zhao Lijian, spokesperson of the Chinese Foreign Ministry, said at Thursday's press briefing that it is an undeniable fact that Xinjiang enjoys social stability, and its people live and work in peace and contentment, ethnic unity and harmony, and the rights to life, health, development and other basic rights of the people of all ethnic groups are effectively protected.

"The existence of forced labor, forced sterilization and other human rights violations in Xinjiang" are blatant lies deliberately fabricated and spread by some so-called scholars and institutions with ulterior motives, said Zhao.

China's determination to safeguard its national sovereignty and security and development interests is unshakable, Zhao noted.

If the EU makes a wrong decision just based on lies cooked up by a few anti-China forces with ulterior motives, it will only show that it is engaged in political manipulation. If the EU insists on taking actions that harm China's interests, China will make a firm response and stay with it to the end, Zhao said.

Feng Zhongping, director of the Institute of European Studies at China Institutes of Contemporary International Relations, told the Global Times on Thursday that sanctions signal a hardening and more complex line toward China.

"Some EU politicians, unaware of the real Xinjiang, use human rights as an excuse to interfere in China's internal affairs. China will no doubt slap countermeasures on officials who push for sanctions." Feng said.

Wang Yiwei, director of the institute of international affairs at Renmin University of China, told the Global Times that the sanctions showed that the EU wants to underscore its global influence through using the mechanism of legal sanctions.

Meanwhile, some anti-China politicians in EU are catering toward US President Joe Biden's "human rights card" under the umbrella of a "democracy alliance," said Wang.

However, the expert said that the EU's hardening tone may gradually ease in the second half of 2021, with the progress of the China-EU investment agreement. The agreement was reached on December 30, 2020 after seven years of negotiations, and may take at least a year to enter into force, Reuters said.

A tougher stance on China could be seen as placating anti-China politicians within the EU, in exchange for less internal obstruction to the signing of the agreement, Wang said.

The US wants to scuttle the EU-China investment treaty, but China and a Europe that emphasizes strategic autonomy will be keen to push their own agendas that fit their own interests in essence, Wang said.