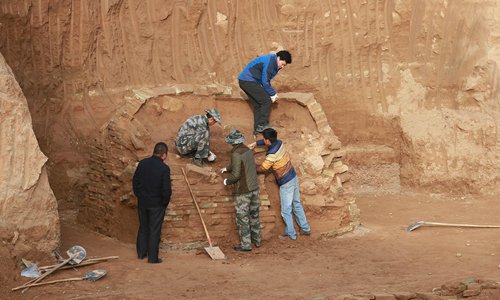 Wang Yongqiang, researcher with the Xinjiang Institute of Cultural Relics and Archaeology, can never forget the day in June 2015 when he was excavating an ancient tomb in Ili prefecture, Xinjiang Uyghur Autonomous Region. When he was carefully sweeping off dust from layers of earth around the tomb, he noticed coal dust. In the same tomb, he saw terra-cotta chips that date back to the Bronze Age, according to Guangming Daily."According to historical records, people in the Han Dynasty had been making use of coal for production and  in their daily life. But it was incredible to see coal at a Bronze Age site," Wang recalled to the newspaper.As the excavation continued, coal dust, cinder and a coal pile were discovered. Carbon-14 dating showed the site is 3,600 years old. The finding indicates that human beings used coal as fuel 1,000 years earlier than previously suggested, according to Xinhua."The findings show that coal as a fuel was used throughout the history of the site. The discovery of this source of energy is monumental in the human history of energy use, and shows the finding has international significance," Ruan Qiurong, director of the Department of Prehistoric Archaeology at the Xinjiang Institute of Cultural Relics and Archaeology, told Guangming Daily.This is only part of the findings of the three-year excavation at the Jartai Pass (Jirentai Goukou) Site in Nilka County, Ili Prefecture. Altogether, the excavation found 2,500 square meters of historical sites in total, including 20 house foundations and eight early burial sites as well as over 1,000 artifacts including pottery, stone objects, and bronzes, according to a research paper published in the scientific journal Archeology.Ruan said the discovery of the Jartai Pass site was because construction was planned on the area, and in 2015 his team discovered the site when they were doing preliminary checks for the construction project. In 2015, 2016 and 2018, Ruan's team conducted three excavations at the site.What was most exciting to the archaeologists is that they found over 2,000 carbonized millet seeds at the site. This is the first time the grain was found in a Bronze Age site in the Ili area, providing new evidence of how millet, a grain mainly originated in eastern China, travelled westward in ancient times. Western grains such as barley and wheat were also found at the site in smaller amounts, which provided inspiring new angles on how grains from the East and the West spread."The archeological discovery proves that the Ili river basin had been an important area where different cultures converged even in the prehistoric age. The finding has key significance in revealing the fact that different ethnic groups lived in and developed in Xinjiang together since ancient times," Ruan said.Among the 20 house foundations excavated, six are larger ones with areas ranging from 100 to 400 square meters. Many of them have signs of columns, coal piles, cellars and pits. Many terra-cotta chips, items of stoneware and bones of animals were excavated at these houses.The smaller houses include 31 sites with an area ranging from 20 to 60 square meters. Large amounts of coal bricks and cinder were found at these sites, as well as slag and copper ore.The archaeologists also excavated 80 tombs, including nine tombs that date back to the Bronze Age. The rest of the tombs date back to the Iron Age and the late Qin (221-206BC) and Han (206BC-AD220) dynasties.Ruan said these houses were used by people in three  periods. The first is from 1,600 BC to 1,400 BC, the second from 1,400 BC to 1,200 BC, and the third from 1,200 BC to 1,000 BC. Zhao Zhijun, a research fellow at the Institute of Archaeology, Chinese Academy of Social Sciences, told the Guangming Daily the large amounts of skeletons of sheep, cattle and horses show how people in the west Tianshan Mountain area evolved from husbandry to a nomadic economy.