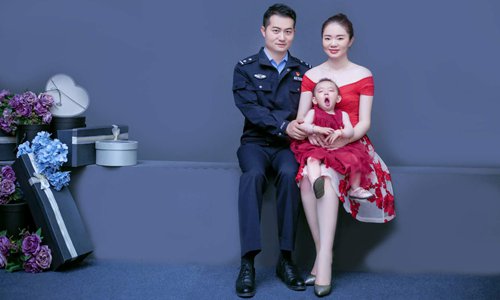 Zhang Zhenwei and his wife and child pose for a family picture. (Photo: Global Times)

Four years after being transferred to the border public security bureau in Yingawati township of Aksu Prefecture, Northwest China's Xinjiang Uyghur Autonomous Region, Zhang Zhenwei can still remember his days on patrol."Some terrorists, who were found trying to sneak into Kyrghyzstan from China's Xinjiang in early 2014, were stopped. Since then we were required to conduct patrols in mountainous areas along the border. At first, the dogs we brought seemed to enjoy their work and barked loudly during patrols. But a few days later, they did not have the energy or mood to bark," Zhang said.Born in August 1991 in Aksu, Zhang has been working in the border areas for more than seven years. "I graduated as a Uyghur language major at Xinjiang Normal University in 2011 and joined the army that year. I was then deployed to work in several public security bureaus in the border areas, including Aksu Prefecture and the Kizilsu Kirgiz Autonomous Prefecture," said Zhang.    Setting up defensesAksu shares 263.8 kilometers of border with Kazakhstan and Kyrgyzstan, and has 16,700 square kilometers of border area, according to a release from the publicity department of Aksu Prefecture.To stop terrorists from crossing the borders from Xinjiang, the regional government has taken various measures, including setting up several defense lines, which involves stationing soldiers on border lines, police officers at border points and residents living in border areas.Border soldiers and officers in Xinjiang have become members of the frontier police assigned to entry-and-exit check stations. One of the tasks police officers in border public security bureaus have to carry out is patrolling border areas, which was not easy, especially when the security situation was not as good as it is now.Zhang recalled that he and other officers used to patrol steep mountains for two days in April 2015 and stayed in a cave overnight. "After finishing the patrol, I had to throw away my shoes and the soles of my colleagues' army boots had been worn down. Body armor, kettles and other equipment weighed about 16 kilograms," said Zhang. "At that time, I questioned the meaning of such patrols. But later we learned that some terrorists had hidden in caves in mountainous areas. Then I realized that it means a lot for us to do these patrols in border areas," Zhang said. In addition to carrying out patrols, Zhang and his colleagues also underwent regular training and maneuvers on shooting and capturing suspects.Strengthening tiesIn 2015, Zhang was deployed to work in the police station in Kuqi village in Yingawati, located less than 40 kilometers away from Kyrghyzstan. Zhang saw the job in Kuqi village as an opportunity for him to better keep terrorist suspects away from the border.However, the first year he came to the village, there were many potential safety hazards. "For example, there was little order and many local residents did not have household registrations," Zhang said.To get closer to the villagers and better solve their problems, Zhang began to work hard on his spoken Uyghur language every day. "I learned the language in college, so I could read and understand it. But speaking it fluently was not that easy. I began to practice it every morning in the first six months when I came to Kuqi village, and then I could talk with villagers," Zhang said.Zhang also tried to fulfill his duties as a police officer to protect the villagers. In August 2017, he and other police officers helped out seven villagers who had been trapped in a mudslide. He also helped more than 20 migrant workers from the village receive a total of 150,000 yuan in delayed salaries. Zhang's efforts to learn the language as well as his patience with villagers have paid off, with more and more villagers becoming familiar with him. Abudu Jilili, a villager in Kuqi, has become a close friend of Zhang's. He told the Global Times that Zhang has been working in the village for the past four years and has always been friendly to people who turned to him for help.Aside from his daily work, Zhang also organized a class to take care of children whose parents are busy working on farms or outside the village."Some villagers sent their children to the station when they were busy with work and then more and more started doing the same. That's why I started a class to arrange for them to read books at the library in the police station. During the summer and winter holidays, we invite college students to give these children classes and help with their holiday homework," Zhang said.For the past five years, Zhang has contacted charity organizations to donate clothes, stationery, sports equipment and toys for more than 400 students in three primary schools. He also supported one girl with her school fees. Almost all the children in the village know Zhang, sometimes calling him by his name when they meet him on the street and saluting him.When Zhang and his wife got married with a traditional Uyghur wedding ceremony in 2016, more than 200 villagers came to offer their best wishes. "The time I have spent with villagers in a year is much longer than with my family. "The villagers are my family now. As long as they need me, I will always be there," Zhang said.