By Liu Xin and Fan Lingzhi in Urumqi | Global Times 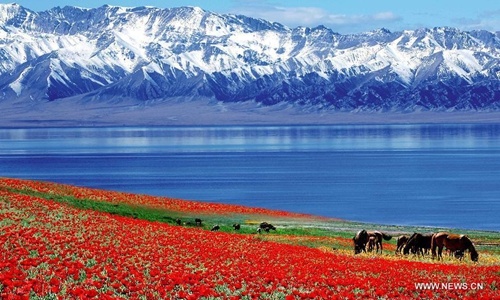 Northwest China’s Xinjiang Uygur Autonomous Region fully respects the rights of ethnic groups and has taken a series of measures, including allocating specific areas for public cemeteries, to protect their rights, a regional spokesperson told the Global Times in an exclusive interview on Friday.

CNN reported on Thursday that “more than 100 Uyghur graveyards were demolished by Chinese authorities.” The allegation was made based on satellite images and the story told by a Uygur poet Aziz Isa Elkun, who left Xinjiang more than 20 years ago and never came back.

Aziz Isa Elkun claimed he could not find his father’s grave, which was located in Xayar county in Aksu Prefecture, from a satellite image on Google. However, instead of checking with his family in Xinjiang, the Uygur poet opted to tell the media of his discovery.

“Xinjiang fully respects the rituals of funerals of ethnic groups and has made a series of regulations to protect their basic rights. The region has also set aside specific areas to be used for ethnic groups’ graveyards,” the spokesperson told the Global Times.

The traditions of funerals of ethnic groups have also been preserved, the spokesperson said.

With economic development and improving livelihoods for locals in Xinjiang, governments at all levels are also making efforts to build public cemeteries and improve facilities at the cemeteries of different ethnic groups. Some people voluntarily choose to relocate the tombs of their relatives to cemeteries, said the spokesperson.

An anonymous source, familiar with the relocation of graveyards situation in Aksu, told the Global Times that previously there was a lack of public cemeteries in rural areas in the prefecture and some graves are scattered over farmland.

To meet local residents’ demands, Aksu has built public cemeteries in line with residents’ willingness to help relocate graves, the source said, noting that for graves that could not be traced to families, the local government notified the public that it was relocating them to public cemeteries.

The Xinjiang regional government has also made efforts to protect ethnic graveyards, which have historical, artistic and scientific values, by renovating many ancient graveyards in Kashi, Ili Kazak Autonomous Prefecture and Turpan.

Relocating graves to public cemeteries is not a unique phenomenon in Xinjiang, nor does it target any ethnic groups, experts said.

Experts noted that many third- and fourth-tier cities around China build more public cemeteries for local residents to move the graves of their deceased family members to during urbanization. Many prefectures in the Xinjiang region are experiencing urbanization.

However, the CNN report somehow jumped to the conclusion that China have been destroying traditional Uygur cemeteries for several years as part of a “campaign to control Islamic beliefs and Muslim minority groups within its border.”

It seems that certain Western media have fallen into stereotypical reporting of China’s Xinjiang issues using sensational claims by individuals without checking the facts, and try to portray the Chinese government as the worst violator of human rights, Chinese observers said.

CNN gave no evidence, other than satellite images, to show that the regional government had demolished Uygur tombs. It claimed it talked to the Uygur community in Xinjiang and has also claimed in other stories that all ethnic groups live under tight surveillance by local governments. It also cited some “experts” on Uygur culture living overseas to prove its allegations.

“Why do the foreign media so surely assume that local government demolished the graveyards of ethnic groups? Why can’t these tombs be removed to cemeteries? Why don’t these foreign media come to Xinjiang to see where these tombs have been relocated? Their purpose is quite clear by only telling half and one side of the story,” the source in Aksu said.

Xinjiang people have the final say on what is really happening in Xinjiang and Western media should stop hyping the situation. For experts and scholars who live in foreign countries and have not visited Xinjiang in recent years, they should stop making groundless claims about the region, analysts said.