Xinjiang residents to sue BBC over fake news on region 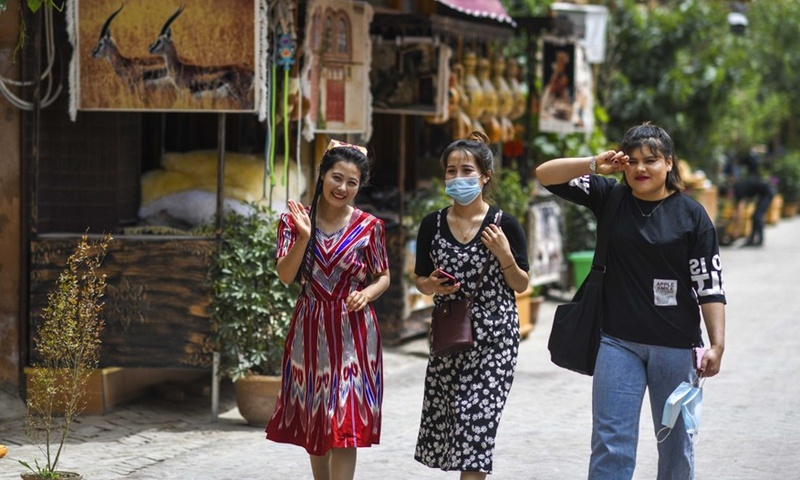 Local residents walk in a street at a scenic spot in the ancient city of Kashgar, northwest China's Xinjiang Uygur Autonomous Region, May 16, 2020. (Photo: Xinhua)

A number of individuals in Northwest China's Xinjiang Uygur Autonomous Region plan to sue BBC for producing fake news, spreading rumors about Xinjiang and slandering China's policy in its Xinjiang region, a senior official from the region announced on Thursday.

Xu Guixiang, deputy director of the publicity department of the Communist Party of China (CPC) Xinjiang Uygur Autonomous Region Committee, revealed the information at a Xinjiang-related press conference held by the Chinese Foreign Ministry in Beijing.

Under the banner of so-called "freedom of the press" and without investigation and verification, the BBC followed the trend and quoted the so-called Xinjiang-related "research report" of pseudo-scholar Adrian Zenz, producing and broadcasting fake news, making irresponsible remarks on Xinjiang-related policies, and spreading rumors and slander, Xu said, noting that the British media outlet has become a platform for the dissemination of Zenz's lies about Xinjiang.

Zenz, a German national who calls himself Zheng Guoen in Chinese, is an infamous anti-China far-right figure who has produced multiple sensational "reports" on Xinjiang on Twitter, and fabricated false academic research on Xinjiang, in which he spread rumors such as large-scale monitoring of local ethnic minorities and forced labor of the Uygurs.

A number of enterprises and individuals in Xinjiang Uygur Autonomous Region have directed lawyers to sue German national Adrian Zenz, Xinjiang local news outlet ts.cn reported on March 9. Local people said that Zenz spread "forced labor" and other rumors related to Xinjiang, which damaged their reputation and caused them to suffer losses.

Some victims in Xinjiang also plan to sue the BBC. Along with Zenz, they will eventually stand in the dock and accept the verdict of law and justice, Xu said.

"The BBC constantly crossed the bottom line on Xinjiang-related reports and completely abandoned the professional ethics of news media. These anti-China forces are in collusion and have staged farcical and absurd scenes that are disgusting and make people laugh," Xu said.

Xu said that Xinjiang has made unprecedented achievements in its economic and social development and improvement of people's livelihoods, showing social stability with people living and working in peace and contentment. People of all ethnic groups in Xinjiang have a growing sense of fulfilment, happiness and security, he said.

"Zenz's so-called 'research report' will be swept into the dustbin of history together with himself, and will be spurned by the 25 million people of all ethnic groups in Xinjiang," Xu said.