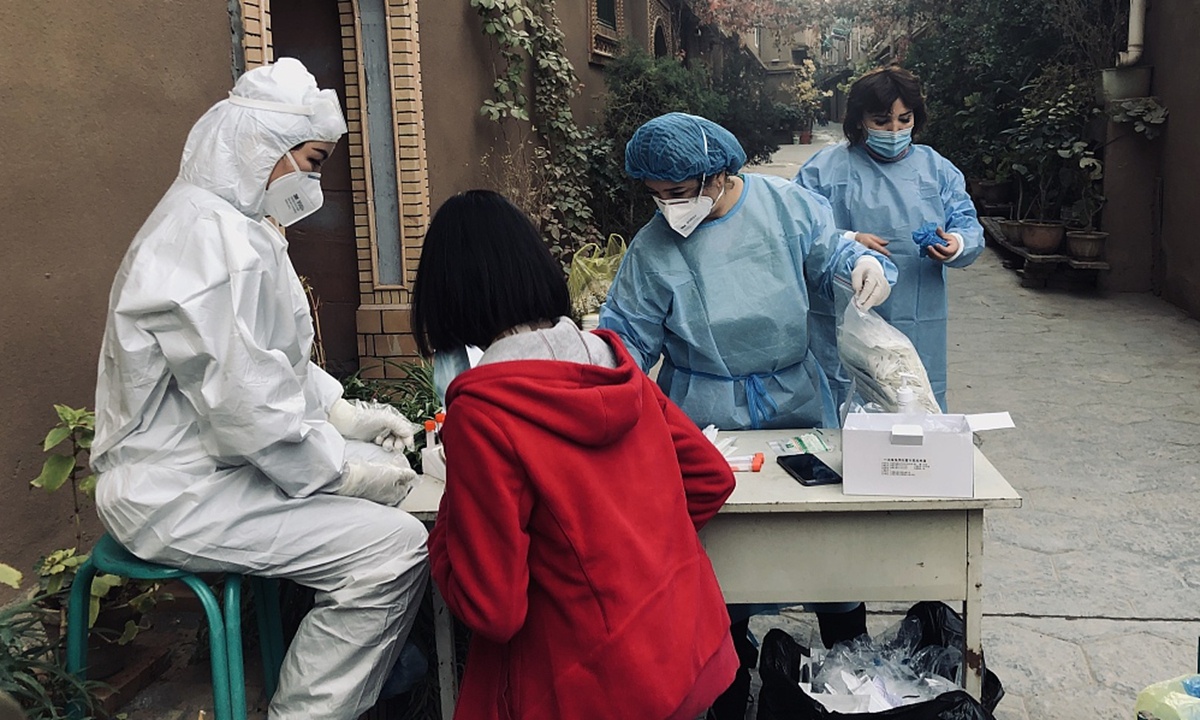 In the wake of the coronavirus outbreak in Kashi, residents of Urumqi, capital of Northwest China's Xinjiang Uygur Autonomous Region are being encouraged to get tested for the virus, in an expansion to the city's regular nucleic acid testing of city residents which began in mid-September.

In Urumqi, some residential compounds have asked all residents to get tested, while other communities are asking only the elderly and children to take the free nucleic acid test. Public sector workers in Urumqi have been tested every seven days since September following an earlier outbreak in the city, said a resident in Urumqi who asked not to be named.

An Urumqi resident surnamed Zhou from the city's Urumqi High-tech Industrial Development Zone told the Global Times that he received the notice from his residential community to get tested for the virus on Monday. The test is required to be completed within two days, for the effectiveness of the test, said Zhou.

Many people are waiting in line for nearly two hours to be tested, said Zhou, adding that it is not as long as they waited to be tested in July and August when the city's outbreak first occurred.

The Global Times learned that regular coronavirus testing has been a "new normal" for Urumqi residents. A resident of Urumqi's Shuimogou district surnamed Shi told the Global Times on Tuesday that the community began organizing nucleic acid testing on Monday. He has been tested six times since the COVID-19 outbreak in Xinjiang's capital.

"Now I see what's happening in Kashi and I am quite worried. I have quarantined for about 100 days this year. If there is an outbreak here, I am afraid life won't return to normal," he said.

An anonymous medical expert in Urumqi's anti-epidemic group, told the Global Times on Tuesday that the capital city is taking normal prevention and control measures and is conducting nucleic acid testing of people in 16 different occupations including the services industry, sanitary workers, construction workers, teachers, students and residential community workers.

As the source of the latest outbreak in Kashi is still unknown, some residential communities are urging their residents to get tested, according to the expert.

Once one coronavirus infection case is found in Urumqi, the city with a population of 3.5 million, will immediately launch a city-wide nucleic acid testing like in Kashi, the expert predicted.

Under increasing pressure, the possibility Urumqi will conduct another round of city-wide coronavirus testing cannot be excluded, Yang Gonghuan, former vice director of China's CDC, told the Global Times, urging the local government to pay more attention to the accuracy of the testing than the last time.

Health officials in Kashi on Tuesday afternoon reported five confirmed COVID-19 cases that were previously asymptomatic, and another 19 asymptomatic patients, bringing the total positive cases to 183, all of whom are linked to Shufu county.

All 4.7 million people in the Kashi region have been tested for the virus as of Tuesday afternoon, two days after the first asymptomatic case was detected.

The respiratory expert said other cities in Xinjiang should also expand coronavirus testing, to make sure no one has been infected.