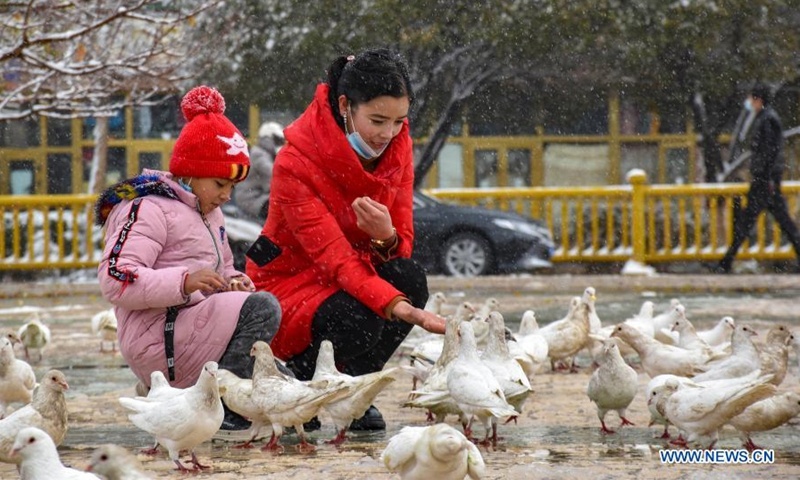 With the old concept of childbearing fading away gradually, people in Northwest China's Xinjiang Uygur Autonomous Region, especially women, have more choices for marriage and childrearing, which has led to a population transition in the region. This involves changes in numbers and also an increase in population quality, a scholar from Xinjiang said, giving a thorough analysis of population change in the region and refuting lies and "genocide" accusations by anti-China forces on "forced sterilization" in Xinjiang.

In a report released on ts.cn on Thursday, Li Xiaoxia, a special researcher at the Xinjiang Development Research Center, provided an overview of population changes in the region, analyzed reasons for the rapid population growth in southern Xinjiang — where ethnic groups make up the majority of the local population — and explained why the current population transition in Xinjiang is local residents' voluntary choice.

But unlike Zenz, who made his "report" based on unclear sources, untenable data and far-fetched claims by overseas Kazakh ethnic groups, Li said she has paid close attention to Xinjiang's population since the 1990s and did abundant field surveys in many places in Xinjiang, especially the southern region.

"When I saw Adrian Zenz's report, which accused China of forcibly implementing sterilization in Xinjiang, I felt it absurd. I made this report to refute his groundless points, untenable data and ridiculous logic," Li told the Global Times on Thursday.

Li said in her report that despite the hyping of China "suppressing" the birthrates of ethnic groups in Xinjiang in Zenz's report, especially Uygurs, the region has actually witnessed stable and continuous growth of the total population and the populations of ethnic groups. From 2010 to 2018, the population of ethnic minorities increased from 12.99 million to more than 15.86 million, with the Uygur population increasing from 10.17 million to 12.72 million - much higher than that of the Han population. 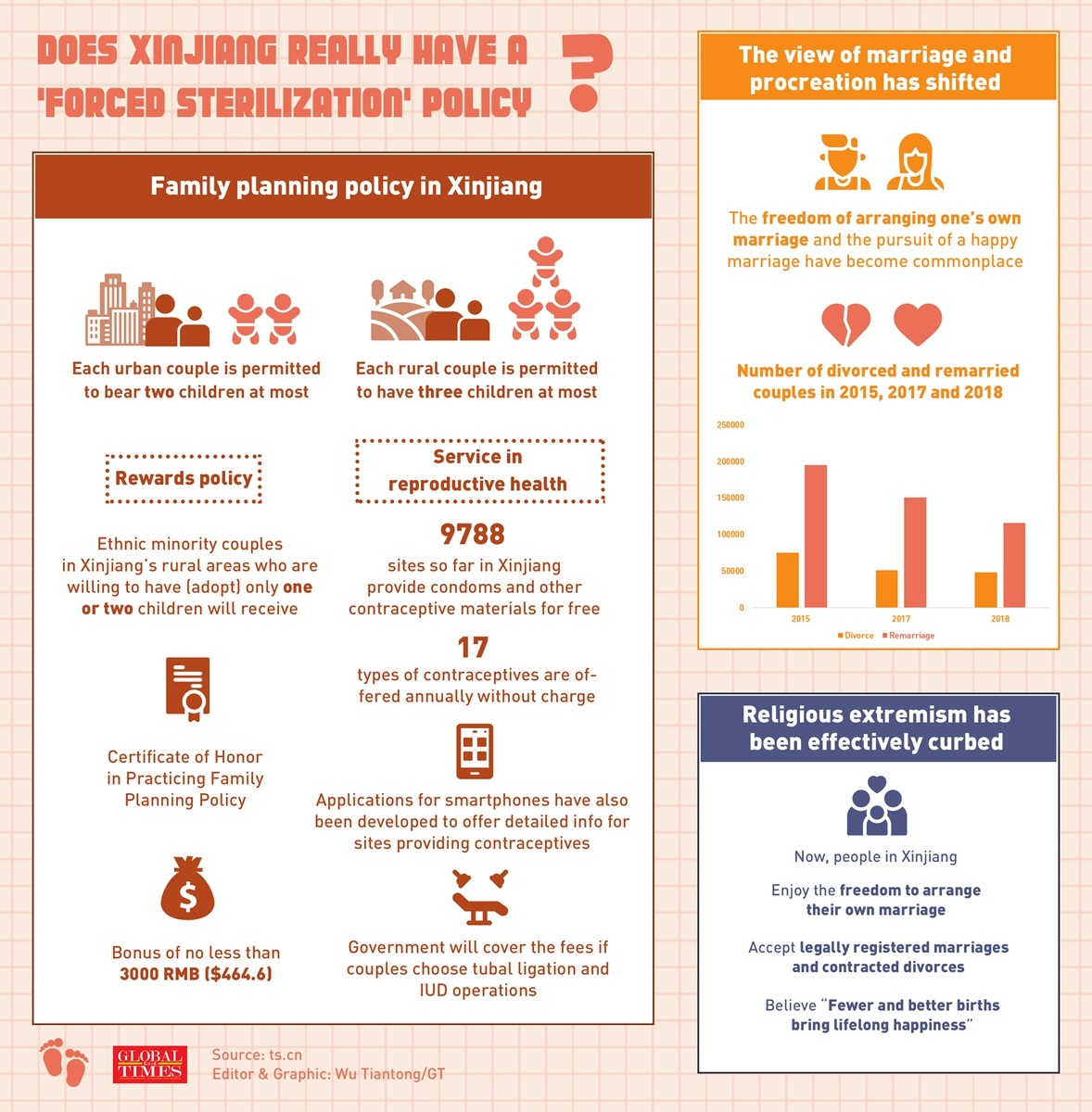 Does Xinjiang really have a 'forced sterilization' policy? (Infographic: GT)

The structure and characteristics of Xinjiang's population after 1949 could be used to conclude that there has been a rapid population increase in all ethnic groups and an improvement of population quality - physical health, education level, employment and females' social status, according to Li.

Li listed three reasons for the rapid growth of populations, especially in southern Xinjiang: the long-term implementation of differential policies for Han and other ethnic groups, which allowed ethnic minorities to have more children than the Han; the improvement of health care, which greatly reduced the mortality rate, and the poor implementation of the family planning policy.

The main reason behind the declines is not what Zenz concluded as "forced sterilization" but a shift of thinking on marriage and childbearing brought by social development and progress, the implementation of the family planning policy and curbing of religious extremism, Li noted in her report.

In order to reach his conclusion about Xinjiang's "suppressing" birth control, Zenz cited unverified data to accuse local authorities of engaging in the mass sterilization of women, as the region used more than 80 percent of China's intrauterine devices (IUDs) in 2018.

But according to the yearbooks on health and hygiene in 2018, the number of placements of IUDs in Xinjiang was 328,475, accounting for 8.7 percent of the total number nationwide, which was 3,774,318. The 80 percent cited in Zenz's report cannot be arrived at by any calculation, except by misplacing the decimal point.

"In these years, young people in Xinjiang discarded backward and outdated thoughts on mate selection and procreation. An increasing number of ethnic minority youths began to put more time and energy into personal development, thus postponing the age of first marriage," read the report.

For example, there have been 9,788 distribution sites so far in Xinjiang giving out condoms and other contraceptives free of charge. Seventeen types of contraceptives are offered annually at no charge. Safe, effective and appropriate contraceptive measures are available to couples of childbearing age, and fertile women voluntarily accept tubal ligation and IUD operations.

In Hotan and other prefectures, the local government follows the principle of combining people's will with technical guidance, encouraging fertile women to choose internationally recognized tubal ligation and IUD operations, which have few side effects and which are safe and effective. All the costs of these operations are covered by the government.

"Deeply influenced by the concept of 'fewer and better,' many married women of ethnic minorities in rural areas were able to go out and get jobs to earn more money," read the report.

"Women in southern Xinjiang used to have no rights over their own marriage and childbearing - all their lives, they were repeating the cycle of 'pregnant-give birth-pregnant.' In the 1950s, the average age for girls to marry in Moyu county of Hotan prefecture was 14.5 years. In 1984, it was 17.3 years, which was younger than the nation's average of 22.2 years," Li said.

In recent years, with the improving education level of women, the change of thinking on marriage and the promoting of laws, early-age marriage in southern Xinjiang has decreased. Women now have more choices for their lives, said Li.

A safe conclusion can be drawn that the transition of the Uygur population and that of other ethnic groups is achieved more by their own choices and autonomy, than the guidance of policies and external forces. The transition is not only a matter of population size, but also a subject involving the overall improvement of population quality, which is the result of voluntary choices of people of all ethnic minorities, said Li.