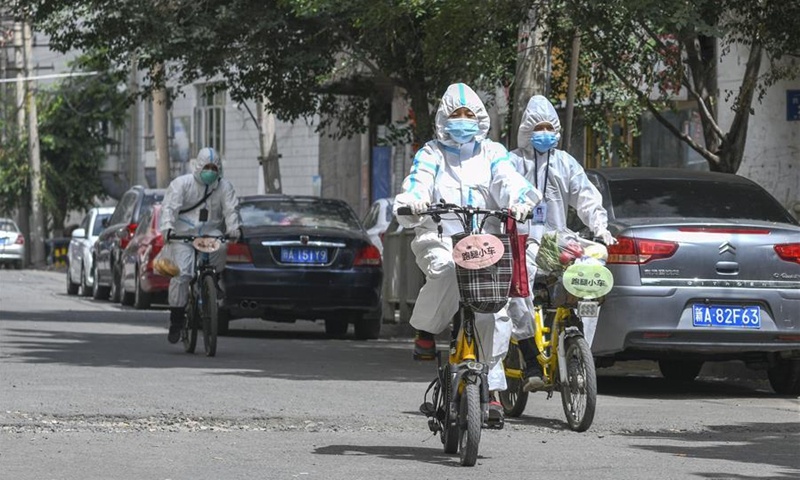 Kashi city in Northwest China's Xinjiang Uygur Autonomous Region has collected more than 300,000 samples as of Sunday morning in a massive COVID-19 testing program aimed at curbing the spread of the virus after one asymptomatic case was reported.

The city is expected to finish testing all its 630,000 residents in two days. As of Sunday 8 am, 308,207 samples have been collected at Kashi's 602 nucleic acid collection points.

During the comprehensive nucleic acid test period, classes at all primary and secondary schools and kindergartens will be temporarily suspended until October 30. Shopping malls will be open as usual to ensure sufficient daily supplies.

Some residents and tourists reached by the Global Times on Sunday said check points are set up on highways with health personnel and no outbound travel is allowed on highways without first showing a negative nucleic acid test result.

Kashi airport has resumed operations and flights can enter and depart the region as normal, but all departing passengers must show a negative nucleic acid test report before they can board a flight. Bus operations in the city of Kashi have been suspended, media reported.

An employee from the Lung Hospital in Kashi Prefecture told the Global Times large numbers of medical staff had been deployed in communities, schools and companies to collect nucleic acid samples. Medical staff are working around the clock to test as many people as they can to meet the requirements of the local government.

On Saturday, a villager in Zhanmin town of Shufu county tested positive during regular nucleic acid testing. Following an epidemiological investigation, people who have been in close contact with the patient have all been put under medical observation.

Xinjiang must make every effort to control regional cases and widespread nucleic acid testing in Kashi will be carried out, Chen Quanguo, the Party secretary of the region and head of Xinjiang's anti-epidemic group, said at a video conference Saturday.

Every second counts, and every effort must be made to carry out epidemiological investigations and cut off transmission channels to ensure that the virus does not spread, Chen said at the conference.

As part of normalized anti-epidemic prevention and control, Chen said Xinjiang will continue to insist on finding fever patients and implementing routine monitoring and early warning mechanisms in key locations. The tight lines of defense in port sanitation and quarantine, cold chain food supervision and disinfection in logistical procedures will be strictly maintained.

Chen also said Xinjiang will stick to the general goal of social stability and long-term security, and maintain normal economic and social order without relaxing the normalization of anti-epidemic prevention and control.