URUMQI, April 4 (Xinhua) -- Batusen, 41, has worked as a road patrol worker for years in Maytas, a place in the throes of extreme storms and blizzards.

Maytas, located in northwest China's Xinjiang Uygur Autonomous Region, is widely known for its harsh weather conditions. For at least 180 days of the year, strong winds howl incessantly and can do so at a maximum speed of 144 kilometers per hour, posing a great threat to locals. 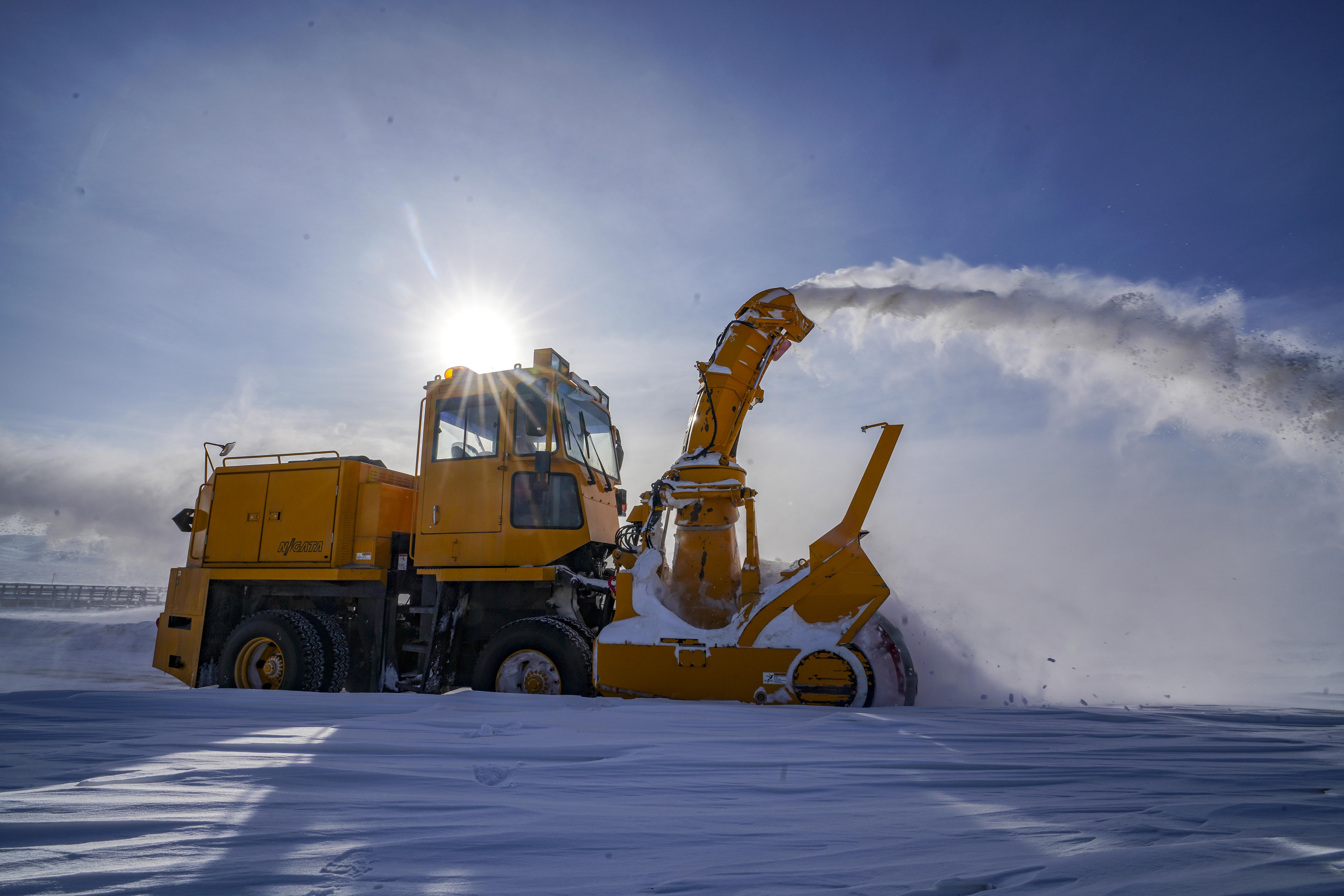 Braving the snow and wind, Batusen, along with 25 other road patrol workers, has saved more than 56,500 people over the last 15 years, which equates to almost 10 people a day.

"We call this section of road the 'camel's neck,'" said Heyrat Bamolla, 54, who has been battling the storms for four decades. "A camel's neck is thin and curvy, and so is the road."

Surrounded by towering, inhospitable mountains, the narrow road in Maytas is the main gateway connecting locals to the outside world. When heavy wind and snow hit the valley, visibility becomes almost impossible.

Heyrat Bamolla was supposed to retire three years ago, but he chose to stay to save more lives.

From early November to late March of every year, the team of 26 road workers will patrol along 103 km of neighboring highways.

Over the past few years, they have shoveled more than 144 million cubic meters of snow and recovered more than 12,000 stranded cars, turning the once deadly road into a passage of life.

Batusen and his colleagues are easy to recognize. They have worn the same bright red uniforms for years, accessorized with red faces, chapped hands and dark circles under their eyes due to lack of sleep.

"Daylight or twilight doesn't make any difference to us, for as long as the storm looms near, we have to stand ready," Batusen said.

Wind and snow are frequent visitors to the region. When heavy snow falls in winter, the road becomes completely covered in less than a day. The snow can even be waist-deep, sometimes measuring 120 cm. Winds can be so strong that passersby must crawl on all fours so they do not get blown away. Roads are usually closed as a result, leaving people stranded and car after car lined up side by side.

"It was not rare to hear of people or animals freezing to death in the past," Batusen said.

During one rescue mission, Batusen and his team had to fight freezing winds while holding people they had just recovered in their arms. They walked for seven hours over 32 km to save their lives.

"The wind blew so wildly. I felt as if I was about to choke. I had to hold my breath for a while and then take a deep breath. Some people get car sickness, but we," he continued jokingly, "get snow sickness."

But they refuse to let fear get to them.

"Can you imagine what it's like to stuff 50 people in here?" Batusen asked rhetorically while referring to the Type 86 infantry fighting vehicle dispatched to his team, which they call "Noah's Ark." The big ark once rescued 150 people during a heavy blizzard.

Driving Noah's Ark in life or death situations is something Batusen is most proud of.

Besides Noah's Ark, the local government provides other types of equipment to Batusen's team. Now they have magnetic sensors and use GPS when shoveling snow, enabling them to save even more lives when disaster strikes. Along with this advanced equipment, younger generations are joining in on the rescue efforts.

The wind howls and the snow falls as usual, however, the locals can make peace with it, thanks to Batusen and his resilient colleagues, deemed as Noah's Ark in the heart of those rescued by them. Enditem