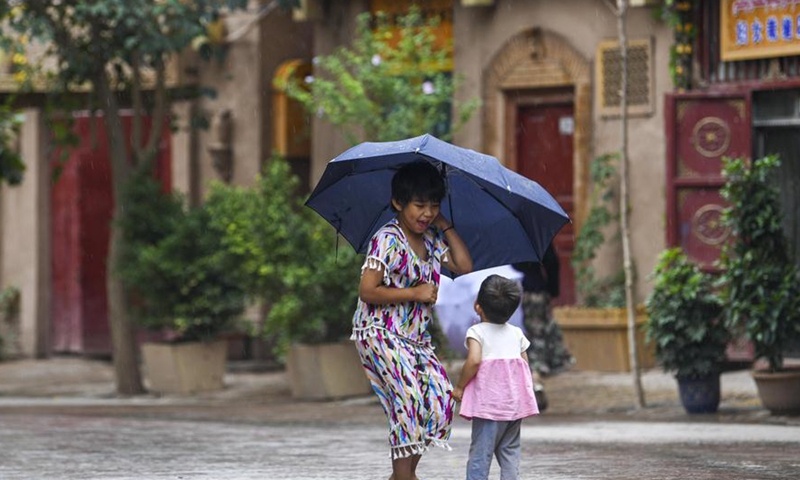 "Although some American politicians believe that 'a lie told a thousand times becomes the truth,' the lies disguised with so-called 'truth' are bound to be exposed by truth itself." By using abundant data with clear sources to expose lies made by anti-China scholars, especially the recent one on China's "suppression" of the birthrates of Uygurs, Xinjiang scholars unveiled how the US and US-backed forces hyped sensational topics and relentlessly made "works" with no facts or credibility to defame China's Xinjiang region.

The abovementioned part was taken from the report titled "An analysis of American interference in Xinjiang Affairs under the context of human rights protection - a research report from the perspective of Xinjiang's population." It was written by Zuliyati Simayi and Zhang Yaqian, two scholars from Xinjiang University, and was released on the university's website on Monday.

In June 2020, Adrian Zenz, a far-right Christian considered a "leading expert" by some Western media who keeps making untenable reports to slander China's Xinjiang policies, published a "report," claiming that China has taken measures to "forcibly suppress the birthrates of ethnic Uygur communities."

Zuliyati and Zhang listed fives lies in Zenz's report. For example, Zenz claimed in his report that "Natural population growth in Xinjiang has declined dramatically" since 2015.

According to statistics released by the National Bureau of Statistics and Statistical Bureau of Xinjiang Uygur Autonomous Region, from 2015 to 2017, Xinjiang's natural population growth rate remained stable at over 11‰.

"The above statement of Adrain Zenz is not consistent with official statistics. Compared with the natural population growth rates of the previous three years, although the natural population growth rate in Xinjiang dropped to 6.13 ‰ in 2018, it is still relatively high in relation to the national average. There is no such dramatic decline as Adrian Zenz stated," read the Monday report.

Zenz also said in his report that "in 2018, natural population growth plummeted to 4.06 ‰ in all ethnic minority regions and 2.58 ‰ in Kashgar [Kashi] and Hotan."

Kashi and Hotan are two of the four prefectures in southern Xinjiang with a majority of ethnic minorities.

The Monday report listed the specific natural population growth rate in Kashi and Hotan and the other two prefectures in southern Xinjiang. The growth rate in 2018 in Kizilsu Kirghiz Autonomous Prefecture was 11.45 ‰, Kashi 6.93 ‰, Aksu 5.67 ‰, and Hotan 2.96‰.

"It is clear that being vague about data sources and lacking authenticity have become a unique writing style of Adrian Zenz," said the report.

The third lie made by Zenz is that he claimed the population growth rates in a Uygur region where Han constitute the majority were nearly 8 times higher than in the surrounding rural Uygur regions in 2018.

But, Zuliyati and Zhang pointed out in the report that "When mentioning the net population change rate for the Han increased to 7.42 ‰, Zenz used the word "estimate," which means it is an inaccurate assumption."

"Perhaps Zenz feels guilty about his lies, so he used vague terms to cover them up. As is known, Xinjiang is a multi-ethnic region where many ethnic groups reside in addition to the Han and the Uygurs. The Uygur population in Xinjiang from 2010 to 2018 did not decrease as Zenz said, but showed an upward trend.

"Again, it turns out that Zenz tampered with the figures of relevant documents released by Kizilsu Kirghiz Autonomous Prefecture to complete his report."

According to data from the Health Commission of Kizilsu Kirghiz Autonomous Prefecture, under the first-level target "Completion target," the natural population growth rate of the second-level target "Quality" is set at 1.05%. It is worth noting here that the unit used in this document is percent. In other words, when the unit is converted from percent to per mille, the natural population growth rate should be 10.5 ‰, according to the report.

Zuliyati told the Global Times that that Zenz's so-called report goes against the basic spirit of scientific research, and "is full of distorted facts, undetailed information and data from unknown sources. It is another 'work' made to defame Xinjiang from the perspective of population."

"My key points in the report are that the development of populations in Xinjiang, including ethnic minority groups, remains stable and healthy and has never experienced a so-called "dramatic decline," said the scholar.

She noted that the population in the Xinjiang region has developed in a similar trend with other places in China. Ethnic groups' population, including that of the Uygurs, continues to increase.

Zuliyati pointed out that Zenz's purpose to make the report is also very clear - as a US-backed anti-China "scholar" and a backbone of an institution manipulated by US intelligent agencies, Zenz makes his living by producing rumors to slander China.

"Soon after Zenz released his report, US Secretary of State Mike Pompeo cited it, which showed that the US government colludes with these anti-China scholars to defame China's Xinjiang under the guise of 'research,'" Zuliyati said.

Zuliyati told the Global Times that in recent years, the US has ramped up efforts to interfere in China's domestic affairs. It is using anti-China scholars to attack the so-called human rights record of China's Xinjiang region and this time, it hyped population topics, trying to sow discord among different ethnic groups in China's Xinjiang, interfere in China's domestic affairs and defame its policies in the region.