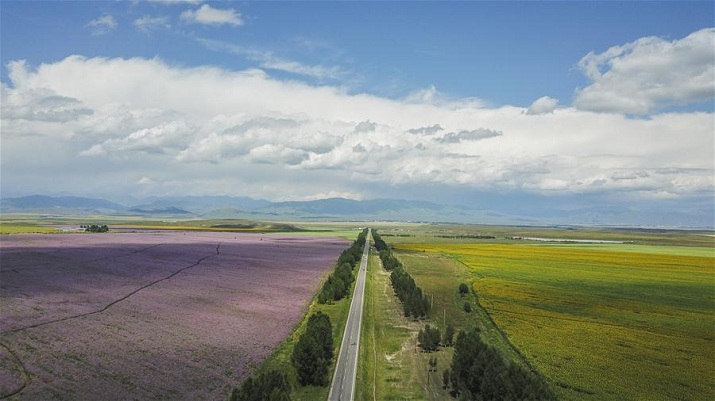 URUMQI (Xinhua) -- Liu Junyi, from Xinjiang, can reel off a list of many Russian cities as he is familiar with every one of them.

Through three years of effort, Liu has made Chinese fruits and vegetables available in supermarkets in cities including Moscow, St. Petersburg and Ekaterinburg.

Grapes from Xinjiang, lemons from Sichuan and pomelos from Fujian are adding Chinese flavor to the dining tables of Russians.

"Hope we have more Russian customers," he said.

Tacheng Yongli Trading Co. Ltd., where Liu works as a foreign trade manager, is located in the city of Tacheng, northwest China's Xinjiang Uygur Autonomous Region. Bordering Kazakhstan, it was once an important gateway for China to Central Asia and Europe.

Ten kilometers away from downtown Tacheng lies Bakti, an ancient trading port with more than 200 years of history.

In 2013, the port became the first in China to offer express clearance for agricultural products, cutting clearance from five hours to 30 minutes.

As one of the earliest local firms engaged in fruit and vegetable export, Liu's company, founded in 2005, started to sell fresh fruits and vegetables to Kazakhstan and other countries.

The company was optimistic about the Russian market with growing demands for imported fruits and vegetables, and expanded its trading business in 2016 after investigation and trial runs.

"Bell peppers, nectarines and tomatoes are the hottest exports these days, followed by pears, apples and lemons starting September," he said.

Meanwhile, sunflower oil and fish have entered the Chinese market through the Bakti port from Russia, which ranked the first among China's major trading partners in terms of trade growth last year.

Trade volume between China and Russia exceeded 100 billion U.S. dollars as of mid-December 2018, a record high.

Sharing a border with eight countries, Xinjiang saw its trade with Russia enjoy a 41.7 percent year-on-year increase in 2018.

Agricultural products and seed oil were among the fastest growing imported commodities, while made-in-China footwear, mechanical and electrical products and toys fueled the exports.

"We're thinking about bringing in Russian beef and mutton to China in the future," Liu said. "It will be a promising business."