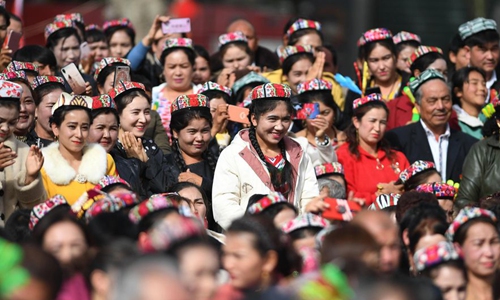 Northwest China's Xinjiang Uygur Autonomous Region denied rumors of children being drowned or hurt due to the absence of their parents "detained" at vocational education and training centers, saying these stories were "fabricated."

The regional government held a third consecutive weekly press conference on Monday, where Rishat Musajan, mayor of Hotan prefecture, said that some foreign media used the tragic sufferings of ordinary families to make up lies to slander Xinjiang's policies.

Some foreign media reported that three children drowned when their parents were "detained" at vocational education and training centers in Xinjiang, and that one 8-year-old girl, whose father was "detained," was burned in close to 60 percent of her body by an overturned stove.

Rishat said a 2-year-old boy named Rehemutula Xirewak from Moyu county in Hotan, whose parents live a normal life and have never been detained, drowned in December 2019.

At that time, his father, Xirewak Aihaitiwak, was renovating their house, and his mother, Bujiannait Jiapar, went to her mother's house when the boy played by himself and wandered away. Later, the toddler accidentally fell into a river and drowned.

A 5-year-old boy named Naisirula Aihemait from Lopu county, Hotan was lost after being left alone for moments by his parents on December 14, 2019.

The parents called the police after finding the boy went missing. The parents learned from a child who was playing with the boy that their son fell into the river while playing.

The police immediately organized a search for the lost boy. At about 11:30 am the next day, the police found the boy's body under the ice of a water channel. When the tragedy happened, both his parents lived a normal life and were not detained.

As for the third drowning case of a 10-year-old boy in Maigat county, Kashi, Rishat said that it was "totally made from thin air."  The regional public security department concluded that no boy had drowned in Yarkant River in August.

On February 18, 2018, 12-year-old girl Aisimagul Aihemait in Kumubositan village, Pisha county, Hotan accidentally knocked a stove when she was playing in the room while her mother, Bumairemu Dawut, was washing clothes in the yard.

After the accident, local government and village officials applied for a special assistance fund for the girl. The villagers also raised money for her medical treatment. Thanks to timely treatment and her parents' care, Aisimagul has returned to school, Rishat said.

However, the good deeds of the local government and the villagers were misinterpreted by some foreign media with ulterior motives, Rishat said.

"I want to ask those media, as you have used the tragic sufferings of ordinary families to make up lies time and again, don't you ever worry about your organization's credibility? Don't you ever feel ashamed about your cold-bloodiness and loss of professional ethics?" Rishat asked.

Officials also refuted rumors on boarding schools in Xinjiang, saying that Xinjiang attaches great importance to education. By prioritizing educational development, increasing investment and implementing educational projects for the interest of the people, the region aims to enable every child to enjoy fair and quality education.

According to statistics, as of the end of 2019, Xinjiang had 12,757 schools for basic education, with 5.89 million students and 484,000 teachers. The gross enrollment rate of pre-school education is 95.95 percent, and 99.9 percent of school-age children are enrolled at primary schools.

"Whether to apply for boarding or not entirely depends on the students and their parents without any so-called forced boarding," a senior official said at the press conference.