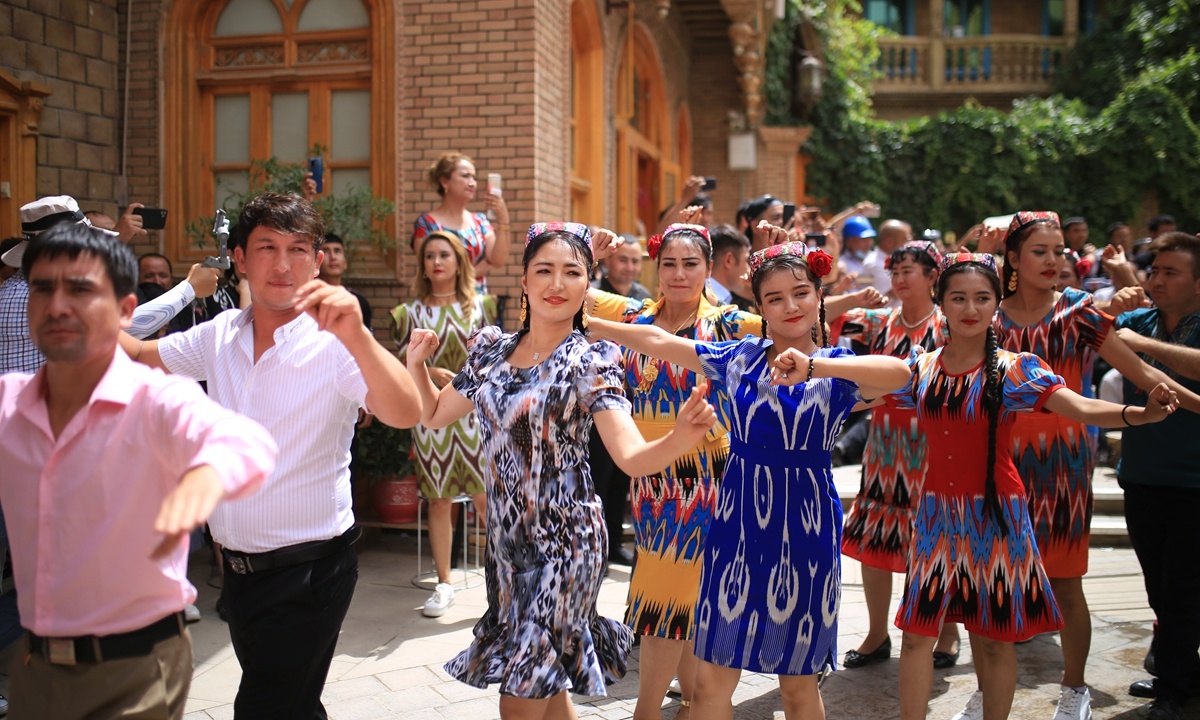 The image of China's Xinjiang region portrayed by Western media has been far away from reality in the region. However, the numerous press conferences on Xinjiang have showed the world the truth of Xinjiang and the false image built by Western media has been slashed. Most important of all, based on the facts that no violent attacks have taken place in Xinjiang for more than four years and residents are enjoying the peaceful and stable life, there will be no room for rumors and lies.

The Global Times (GT) reporters Liu Xin, Fan Lingzhi and Yang Ruoyu had an exclusive interview with Xu Guixiang, Deputy Director of the Publicity Department of the Communist Party of China (CPC) Xinjiang Uygur Autonomous Region Committee, and spokesperson of the Xinjiang regional government. Xu shared his experience in fighting against Western media smears and pointed out that the recent twisted report made by the Associated Press on Xinjiang is "despicable." Xu said that as long as the "three evil forces" of extremism, terrorism and separatism exist, Xinjiang will not change its determination to implement the anti-terrorism measures.

Xu: Xinjiang used to be battered with frequent terrorist attacks and to safeguard the social security and to protect the people's safety, lives and property, the region has set up anti-terrorism facilities according to the local needs. Those facilities are necessary and had played significant role in the fight against terrorism and extremism.

There have not been any terrorist attacks in Xinjiang for more than four years thanks to arduous anti-terrorism work and a fundamental change toward stability and harmony. In accordance with this new situation, we optimized the anti-terrorism facilities to bring convenience to the life of local residents.

We are aware that there is a long way to go in anti-terrorism and de-radicalization work in Xinjiang as terrorism and extremism have persisted and developed for a long time. More work needs to be done to root out and eliminate this bad influence. The current situation is good but it does not mean we can let our guard down and "put arms into the warehouse and release the horses." No, we cannot. As long as the "three evil forces" exist, Xinjiang will not change its determination to implement anti-terrorism measures.

GT: We have noticed that past terror attacks in Xinjiang have been unveiled. What are the reasons behind this change?

Xu: Recently, the international narrative against China's Xinjiang is fierce. Some Western media, think tanks and politicians stigmatized and smeared Xinjiang's anti-terrorism policies for alleged oppression against ethnic groups, cultural genocide, forced labor, religion oppression, among other accusations, and claimed that genocide had been committed in Xinjiang.

They also denied the inhumane and barbaric nature of the terrorist attacks. They are against the historical trend and the claims are serious provocations to all 25 million Xinjiang residents.

GT: However, Western media has portrayed a totally different Xinjiang. What do you think about the current narrative battle on Xinjiang between the West and China? Why has the West chosen Xinjiang as a target?

Xu: Two basic points should be taken into consideration when discussing Xinjiang: the whole world is experiencing changes that have not been seen in a century and the Chinese people are walking on the path to realizing the second centenary goal. China's developments have increased the anxiety, frustration and vigilance of the US and other Western countries, leading them to attack China with all means, without principles or considering the cost.

Why did Xinjiang become the focus of this battle? First, Xinjiang is a place of strategic importance for the US to implement its strategy of "pivot to Asia," to contain China and maintain its hegemony. Geographically, Xinjiang is in the center of Asia and it is also the core region for the Belt and Road Initiative as well as an important security shield for China in the west of the country. For the US, messing up with Xinjiang could help contain China and eliminate a threat to their superpower status.

Second, many factors like history, ethnic and cultural diversity, and geopolitics in Xinjiang have been under close attention and any small changes could stir the situation. Therefore, in the eyes of the anti-China forces in China and the West, the "Xinjiang card" is easy to play.

Third, anti-China forces in the US and some Western countries want to play the Xinjiang card to shift attention from domestic problems. They want to contain China by hyping Xinjiang topics and are using the region as an experiment to rehearse the decoupling with China.

We must point out that Xinjiang issues are not about ethnic groups, religion or human rights, but about anti-terrorism, de-radicalization, anti-separatism and the fight against interference of foreign forces. It is a battle between light and darkness, justice and evil. We have truth and justice on our side and the anti-China forces in the US and the West are doomed to fail. It is only a matter of time.

GT: Do reports by foreign media on Xinjiang reflect the truth? Have you talked with some foreign journalists about their distorted reports? What did they say?

Xu: I think foreign journalists saw what really happened in China's Xinjiang and some of them published valuable stories. But there were some Western journalists that made biased or even distorted reports.

For example, a journalist from the Associated Press came to Xinjiang, asking to visit a prison. With greatest sincerity, we helped make it happen. However, the published report was totally different from reality. The prison was described as a vocational training and education center and the prisoners were described as "possible trainees."

Another example is the BBC. Without permission, BBC journalists took pictures and videos of working staff from the Pomegranate Seed Garment Co in Kuqa, Xinjiang. Their stories with distorted facts have offended local residents and workers of the company.

These journalists came to Xinjiang not to see the truth but to make fuss and "verify" their bias. These reporters are not welcomed. Their behaviors have violated professional ethics and damaged the media's reputation, which were despicable.

I have talked to some foreign journalists. I asked them, "when we were on a trip in Xinjiang, you saw the kindergarten. You said, 'this is good.' You visited a vocational training and education center and had a nice conversation with trainees. Why, with all the facts you have seen, you wrote something different in your report, like calling a school a 'concentration camp?'"

A foreign journalist told me privately that "as a journalist, I don't want to put myself in the middle of China and the West. But I also have my own boss to deal with."

I said that "you have your boss but do not forget that you are also a journalist and if you turn white into black in your story, you are not a true journalist but a politician. Your reporting will have no value but to become material used by anti-China forces. Or we can say that you have been forced to do the job, which would be the true 'forced labor.' And if you keep doing this, your reputation, together with your media's reputation, will be ruined. You will not be welcomed in Xinjiang or anywhere else in China."

I hope my words would serve as a wake-up call to him or at least make him reflect on his deeds.

GT: Are foreign media free to come to Xinjiang? Some of them said they have been under police surveillance once they arrived in Xinjiang. Is this true?

At the same time, foreign media and their correspondents stationed in China should also abide by China's laws and regulations, as well as professional ethics, to produce objective and accurate reports.

I have told foreign journalists that, " if you are not terrorists and you do not have knives or guns or are doing anything bad, why would the police want to follow you? In Xinjiang, there's no surveillance or interruptions for journalists' normal work.

However, we must make it clear that, if some foreign journalists complained they had "no freedom" when working in Xinjiang, we should take a look at their activities in the region. For example, a Western reporter went to Hotan for interviews. When local residents were attending a funeral, the journalist impertinently asked questions and took pictures, disrespecting local customs in many ways including stomping in the graveyard. This made local residents angry and they called the police.

GT: How should we deal with the crazy attacks from the West?

Xu: What Xinjiang has done is open and transparent, and we want all residents of different ethnic groups to live a better life. When facing crazy attacks from anti-China forces in the US and the West we must fight tit-for-tat.

We should show the true Xinjiang to the world. For example, we have held nearly 50 press conferences on Xinjiang with the participation of more than 300 residents from Xinjiang to share their own stories to show the real situation in the region and refute rumors.

We are happy to see that the true situation of Xinjiang has been seen by more people. For example, French writer Maxime Vivas, Max Blumenthal, founder of US independent news website The Grayzone, as well as politicians from Italy and scholars from Japan all stood out to speak for Xinjiang.

GT: China has taken firm countermeasures against attacks from the West but the West called us "wolf warriors" for that. Is this fair? Do you think our response contradicts our goal of projecting a reliable, admirable and respectable image of China?

Xu: Chinese people love peace. In history, China used to be one of the strongest powers for a long time but left no history of colonization or invasion. China is walking the path of peace and development. We do not strive for hegemony. We do not bully others or interfere with the domestic affairs of other countries. But Xinjiang issues are related to our core national interests. Facing the smearing campaign from the US and West, we must stand out to fight back. It is unacceptable that some countries can groundlessly accuse others but others cannot fight back.

Xinjiang is a reliable, admirable and respectable place with touching stories. For example, an official named Yang Yizhong in the Kizilsu Kirgiz Autonomous Prefecture worked with more than 20 representatives from different ethnic groups to help them solve problems. Many elder women deemed Yang part of their family.

In Xinjiang, officials like Yang are common. Recently, Henan Province was hit by heavy rainfalls which attracted attention of Xinjiang residents. They voluntarily donated money and goods to support Henan. On July 27, Yiminjan Kurban, a resident from Shule county, learned about the situation in Henan and called on 180 Uygur residents to make 10,000 nan breads and drove for three nights and two days to Henan to donate them.

How lovable are these people and how vivid are their stories. I believe Xinjiang's future will be bright.