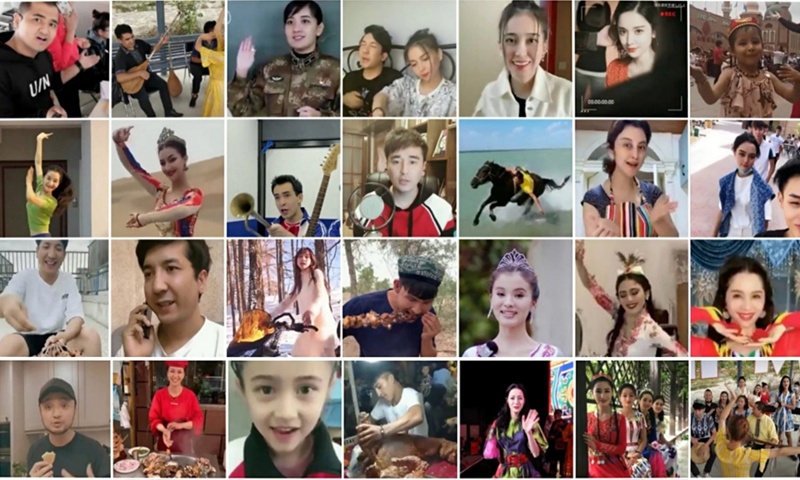 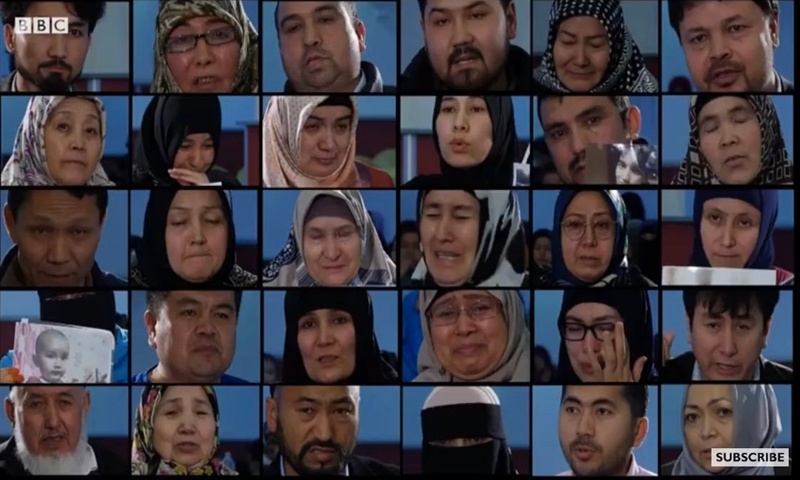 Images of Uygur people in interviews with Western media (Photo: screenshot of Twitter)

After a Uygur Twitter user posted pictures comparing the Xinjiangers seen by the local public and those portrayed by Western media amid the intensifying slanders against China's policy in the region, analysts noted Western tricks only exposed their ulterior motives and educated Chinese people about their hypocrisy in human rights.

Many Twitter users are reposting pictures that show the real life of Xinjiang, where people are dancing, playing sports or just hanging out, with smiles on their faces. But in another set of images, "Xinjiang people" in the Western media are always seen against a gray-blue background, with faces showing bitterness.

"Why do Uygurs overseas look exactly the same? No colored clothes, all black, all mournful faces?" asked a Twitter user.

Chinese Foreign Ministry spokesperson Wang Wenbin at a press conference on February 23 cited the example of a Uygur woman who contradicted herself in different interviews with Western media. Wang slammed Western media for recruiting actors to spread lies about Xinjiang.

But the tricks are seen through by more and more people. Xinjiang residents have also shared their lives and thoughts on social media, inviting more people to know about the real Xinjiang.

"There is no war in Xinjiang. We have had no terrorist attacks for five years. Police cracked down on drugs, and people live in a safe environment and don't worry about being injured in the streets," Tursunali wrote on Saturday.

"We do not need help from the West and hope overseas 'Uygurs' stop 'protesting,' you are really ridiculous," read Tursunali's post.

The discussion was also active on Sina Weibo, where Chinese netizens pointed out the West did not care about human rights when terrorist attacks claimed the lives of Xinjiang residents. But when the region develops and prospers, they "suddenly discover a human rights issue."

As a bridgehead of China's Belt and Road Initiative, Xinjiang's GDP grew by 3.4 percent in 2020, 1.1 percentage points higher than the national GDP growth rate. As of 2020, 3 million people in the region had been lifted from extreme poverty.

Jia Chunyang, an expert at the China Institutes of Contemporary International Relations, told the Global Times on Monday that the lame smears cannot change Xinjiang people's support for the Party and government, but only educate Chinese people about Western hypocrisy in using human rights as a tool to disturb Xinjiang.

Since Xinjiang is being governed well, the terrorist organization East Turkestan Islamic Movement (ETIM) has little room in Xinjiang, so it has started to lobby anti-China politicians overseas for help, who also want to use Xinjiang as leverage to contain China's rise, Jia noted.

The George Bush administration in 2004 added ETIM to its blacklist as it found common cause with China in the "war on terror." Former US secretary of state Mike Pompeo announced in November 2020 that the US no longer recognized ETIM as a terrorist organization.