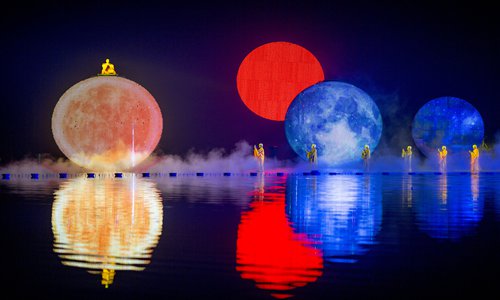 The locals in Xinxing participate in the live-action performance. Photo: Courtesy of Xinxing government The initiative of this performance was to promote the Buddhist culture and Zen spirit of Xinxing, which has a history of over 1,300 years. According to the local government's plan, Xinxing will be developed into a Buddhism cultural location, which originally started with the investment of 20 million yuan ($3.1 million) from a cultural industrial investment company in 2016, promising to turn the county into a Buddhism-themed tourist attraction. The center of this project is the large-scale live-action performance focused on the Sixth Patriarch of Chinese Buddhism. Over 350 people participated in the performance at a local theater with a capacity of 1,800 people. The performance was designed to include audience participation by giving each member of the audience a colorful light symbolizing a Buddhist prayer bead, transforming the audience into performers. When the audience walked into different areas, their lights changed colors.The theater itself is a highlight of the show. Shaped like a lotus flower, it can rotate 360 degrees. In addition, the theater contains a 60-meter-long corridor and 228 bells, designed to promote Buddhist culture.Mei Hong, the producer and director, said that there were several national artists who participated in the preparation of the performance, and advanced lighting techniques were also adopted into the show. Talking about the industrial value of culture and tourism, Mei mentioned several important factors to help Xinxing develop its tourism industry, including finding industrial value through characterizing its culture and tourism resources.The head of Xinxing County, Yuan Huoyue said that as one of the birthplaces of Chinese Zen culture, Xinxing will fully integrate and take advantage of the natural ecological environment and the Zen culture resources, turning Xinxing into a place with strong regional cultural characteristics. "We will work hard to explore the tourism development mode by industrializing our local culture," Yuan said. "As the first large-scale live-action performance in Guangdong, it fills the gap of the lack of cultural performances in the region."