BEIJING, Nov. 19 (Xinhua) -- Xu Qiliang, vice chairman of the Central Military Commission, said on Monday that China and Cuba should further strengthen their traditional friendly relations and continuously push for the development of bilateral ties. 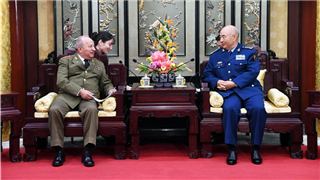 Xu made the remarks when meeting with Cuban Minister of the Revolutionary Armed Forces Leopoldo Cintra Frias.

Xu said after more than half a century since their establishment of diplomatic relations, bilateral ties between China and Cuba have weathered international changes, remained unshakable and become even firmer thanks to the efforts of several generations of state leaders.

With bilateral military relations having achieved rapid development in recent years, China will continue to support Cuba's efforts in military building and push for further development of military exchanges and cooperation between the two sides, said Xu.

Cintra expressed his hope that the two militaries can deepen their practical cooperation in all aspects and make contributions to the constant advancement of overall bilateral relations.