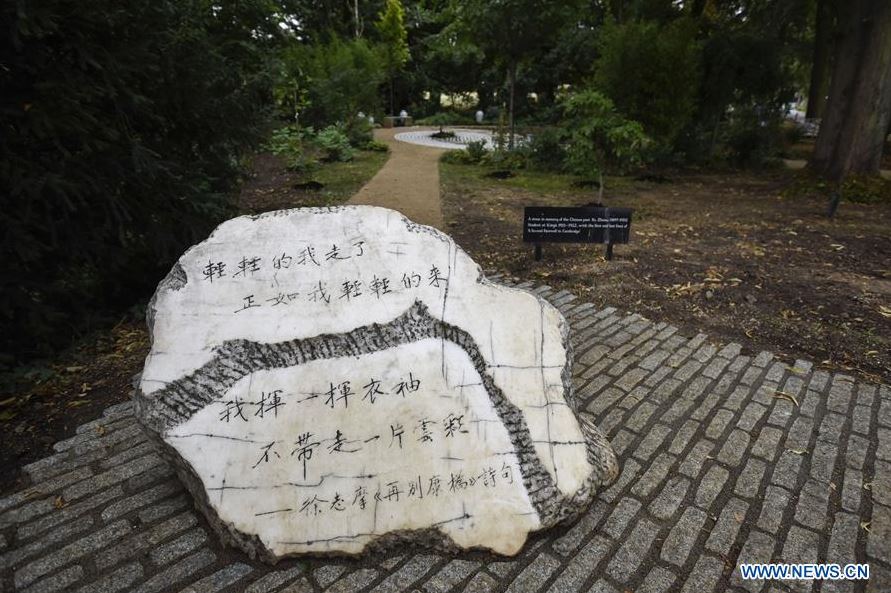 CAMBRIDGE, Britain, Aug. 11 (Xinhua) -- In 1922 when Chinese scholar Xu Zhimo studied at the King's College Cambridge, he loved to enjoy the view at the Cam river bank looking out from his dormitory window and later created his most famous poem A Second Farewell to Cambridge describing the scenic landscape.

The poet surely never imagined that over 90 years later, a Chinese garden after his own name is designed and built at the exact site where he loved to see.

The King's College held the opening event for the Xu Zhimo memorial garden Friday, during the fourth annual Cambridge Xu Zhimo Poetry and Art festival. Dozens of poets from China and Britain gathered in the garden, reading their own works on the theme of Birds and Gardens.

Xu Shanzeng, the oldest grandson of Xu Zhimo, was invited to Cambridge and read his grandfather's best-known poem in the garden.

It is the first Chinese garden built inside any college campus in Cambridge. Visitors approaching the King's College Bridge from the front of the College first see the willow trees as portrayed in Xu Zhimo's A Second Farewell to Cambridge.

It is followed by the white marble memorial stone which was placed by the bridge in his honor. The space behind the enclosure of the stone was selected for the garden.

In September 2015 when Steven Coghill, the senior horticulturist of King's College, proposed the Xu Zhimo memorial garden, he already had an idea in mind. He envisioned a garden that would combine the broader landscape character of King's College with authentic Chinese landscape design in a way different from any other garden in Cambridge.

The garden center is shaped as Yin and Yang, with a walking path running through. Functionally, the path inscribed with the second and third verses of A Second Farewell to Cambridge, guides the flow of visitors through the garden to reach the Crescent Moon Bench which was named in memory of the Chinese literary society co-founded by Xu Zhimo in 1923.

Steven Coghill said before the completion of the garden, visitors could only gather around the memorial stone for Xu Zhimo. There was no opportunity for a longer stay, other than taking quick photos beside the stone.

The making of the garden provides opportunities for visitors to depart from the main path and spend time inside the garden to contemplate the world-famous modern poet who died in a plane crash in November 1931.

Xu wrote his A Second Farewell to Cambridge in 1928, after his third visit to Cambridge. It is filled with longing for Cambridge, for his love and for England and its poetry.

Almost every Chinese schoolchild learns it by heart. The King's College set up in 2008 a stone inscribed with this poem under the shade of willows at the bank of the River Cam to commemorate the Chinese poet for his contribution to Sino-British cultural exchanges.

Professor Alan Macfarlane, chair of the Cambridge Xu Zhimo Poetry and Art festival, told Xinhua that the garden is not only designed on Daoist and Buddhist principles, but also to represent a fusion of East and West.

"Here we have English trees around the garden and also Chinese plants native to Xu's home region in Haining, Zhejiang province.

"So it is a fusion of east and west, just as Xu Zhimo was trying to bring the cultural treasures from China to England, and from England to China. I think in a world which is filled with conflicts and threats of war, this is a peaceful resolution of some of the conflicts of civilizations," Macfarlane said.

Macfarlane hoped that through both poetry and the garden, cultural links between the United Kingdom and China can be further enhanced. "I hope Chinese guests will experience the beauty and friendship of King's College which so delighted Xu," he added.

In its fourth year, this poetry festival has become one of the most influential Sino-British cultural exchange activities in Britain since 2015. During this year's festival, eight artwork exhibitions showcasing modern Chinese painting, porcelain artworks and calligraphy are also held in the King's College.