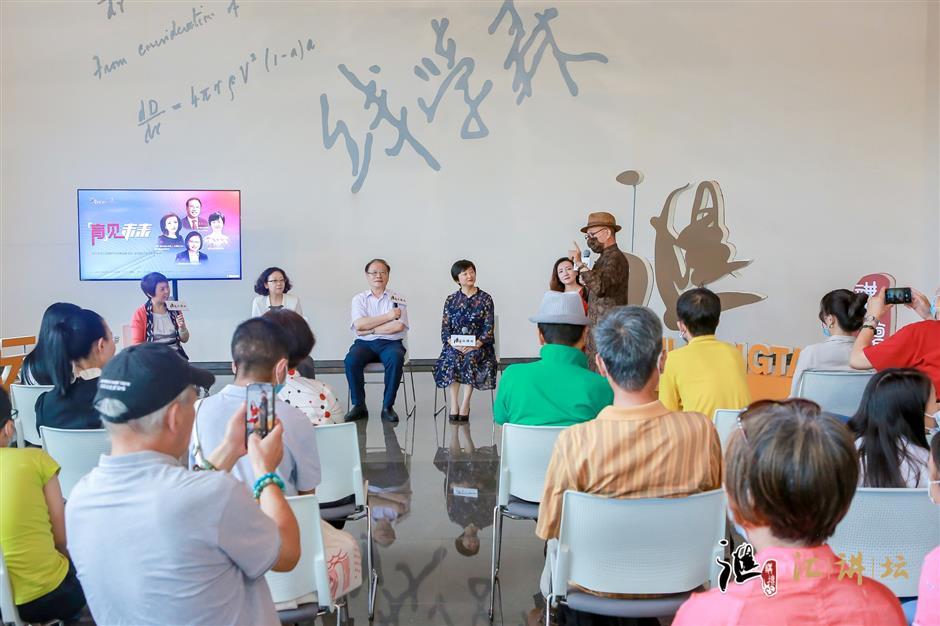 People discuss about the importance of physical education to students during the monthly Hui Forum at Qian Xuesen Library on Saturday.

Xuhui District will further promote sports education across its elementary and middle schools to enhance both the physical and moral standards of local students.

"Sports training is the best moral education," Wang said. "It can teach students to be patriotic and persistent, as well as to cooperate with others, obey rules, struggle and properly handle success and failure."

Additional sports events and competitions will be organized at the Xuhui schools, she said.

A swim training program, for example, will recruit 700 students for professional training every week. The Xuhui Swimming Pool opens only to juveniles for training and competition between 8am and noon every weekend.

Basic martial arts movements will be taught at elementary schools in Xuhui, while more complicated movements and Taichi boxing will be promoted at junior and senior high schools.

Young children are encouraged to take part in gymnastics and rope skipping which helps their body growth and development.

The body quality of young students of the Jianxiang Elementary School, for example, has been largely improved after the wide promotion of rope skipping exercises. Some kindergartens in Xuhui have also added rope skipping into their curriculum, Wang said.

An aerobics competition initiated in Xuhui in 2009 is held annually. It encourages students to go to gymnasiums rather than staying at home during the summer vacation.

Some physically or mentally challenged people are also invited to take part in the annual event.

Xuhui, named after the Ming Dynasty (1368-1644) scientist-scholar Xu Guangqi, has long been deemed as the origin of Shanghai's modern science and civilization. Eighteen schools and universities in Xuhui are more than 100 years old.

It has trained many top scientists and gold medal winners of the Olympics in recent decades. They include Chen Yuxi, who swept the women's 10m platform gold and silver at Tokyo Olympics with flawless performances.

Chen graduated from the Guangqi Elementary School in Xuhui, which is known for gymnastics and diving events.

Many Olympics champions are invited to meet and inspire Xuhui students.

They include Tao Luna, a women's 10-meter pistol shooting gold medalist at the 2000 Summer Olympics, Wu Minxia, another Olympic diving champion, China's legendary volleyball player and coach Lang Ping, and Xu Haifeng, a pistol shooter who won the first gold Olympic medal for the People's Republic of China in Los Angeles in 1984.