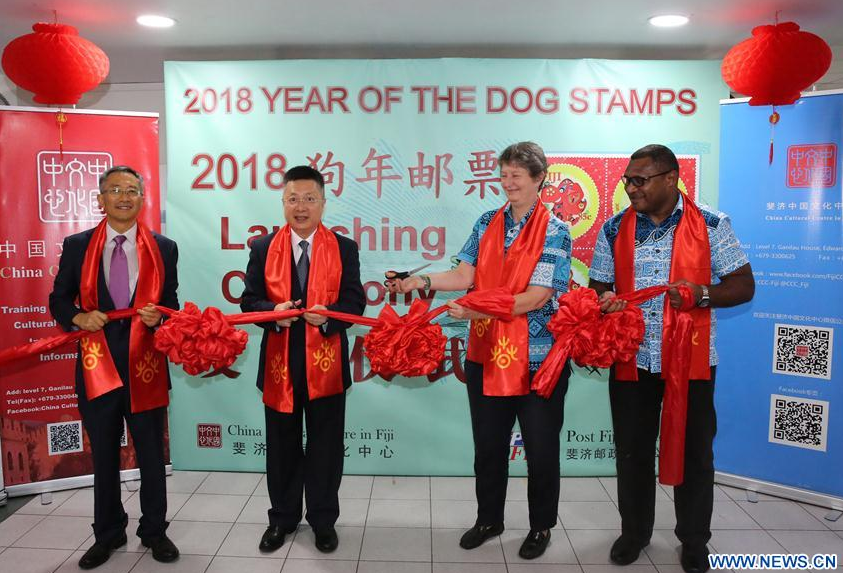 South Pacific Island state Fiji held on Friday a grand launching ceremony of the Year of the Dog Stamps and First Day Cover, which were officially issued on February 28 this year. Photo: Xinhua/Zhang Yongxing

South Pacific Island state Fiji held on Friday a grand launching ceremony of the Year of the Dog Stamps and First Day Cover, which were officially issued on February 28 this year.

"The stamps are small, but they have great significance. They are not only the fruit of cultural exchanges, but also symbol of the ever-increasing understanding and friendship between the Chinese and Fijian people. The small square of a stamp is a testimony of the healthy development of the relations between our two countries," he said.

For his part, Deng Xianfu, director of China Cultural Center, said that the center has cooperated successfully with Post Fiji Ltd. over the past two years to respectively issue the Year of the Monkey and the Year of the Rooster Stamps and First Day Covers.

This is the third time for the two sides to collaborate to issue a set of Year of the Dog Stamps and First Day Cover, which is designed by a well-known Chinese designer Guo Aihe from Henan Province.

The successful launching of the Year of the Dog Stamps has highlighted the sincerely-cooperative spirit between China Cultural Center and the Post Fiji Ltd and the ever-deepened friendship between the Chinese and Fijian people. It has also reflected the great progress we have made in the past two years in the cultural exchanges between China and Fiji, he said.

Meanwhile, the Permanent Secretary for Fiji's Education, Heritage & Arts, Alison Burchell and Post Fiji Limited's Acting Chief Executive Officer (CEO) Isaac Mow also welcomed the issuing of the Dog Stamps and First Day Cover, saying that this is a significant event for the exchange of culture between Fiji and China, and it will help promote the friendship and already good relationships between the two countries.

According to Deng, the Year of the Dog Stamps are designed based on the images of the Chinese Rural Dogs of the Chinese New Year Paintings, integrated with the elements of auspiciousness, fortune, peace and abundance of the Chinese tradition.

The stamps are designed with a square and a circle, signifying the Chinese philosophy of " Round Heaven and Square Earth" , meaning that China and Fiji are just like close neighbors despite being separated by the Pacific Ocean.

In the red shading pattern of the stamps, there are elements of Fiji National Flags, National Emblem, and National Flower "Hibiscus": pigeons with olive branch signifying peace, sugar cane, coconut and banana, signifying the important plants of Fiji, and the sail and boat, signifying Fiji's location and main transportation.

The whole set of stamps are in red and yellow colors, full of oriental flavor of happiness and festivity, signifying the best Chinese New Year wishes to the Fijian people.

On the First Day Cover, the shading pattern is the coconut tree and the banana leaves with Fijian National Flag elements, the image is a flower bundle with Fiji local flowers, which is the base of the 4 different stamps, and each has a different value and image.