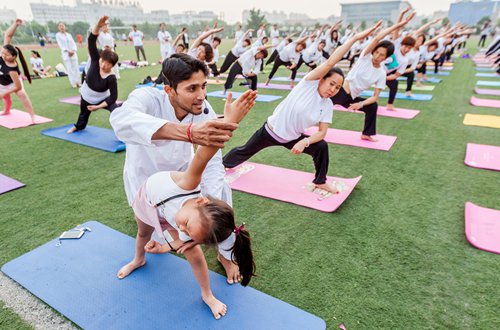 ○ China leads India in terms of military and economy, but could learn from India's culture export.

As a ticket seller in a cinema in Beijing's Haidian district, Ying had a busy weekend tending to swarms of moviegoers filling the theater to watch the latest imported Indian movie, Bajrangi Bhaijaan.

This is the most recent Indian film to enter the Chinese market and has shown strong growth at the local box office, with 55 million yuan ($8.67 million) in revenue within 72 hours after its Friday debut.

"The cinema was packed! Bajrangi Bhaijaan may be the winner of the March box office if previous Indian movies like Dangal and Secret Superstar are any indication," Ying said, adding that she and her colleagues are also eager to view the film after work, as "Indian movies are always upbeat and reveal a different culture."

Chinese people's impression of India, however, is not always that upbeat. Overwhelmed by negative news about rapes, slums and sewage, the Chinese used to see India as a dirty, disorderly and backward third-world nation. But the situation is dramatically changing, as more and more Bollywood films win the hearts of Chinese audiences and erase some misunderstandings, presenting a more wholesome glimpse into modern India.

Indeed, Chinese audiences have in just the past few years seen more Bollywood films than ever before in the history of cinema in China. But movies are not the only Indian entertainment being gobbled up by Chinese consumers.

Yoga clubs have, over the past two years, been popping up in Chinese cities like mushrooms after a rainy day as India continues to heavily promote the ancient art at a global level. Following Indian Minister Narendra Modi's visit to China in May of 2015, the Chinese and Indian governments have also been cooperating on joint Yoga-Taichi events.

Yoga has in fact been popularized in China for more than a decade, becoming well-known even in fourth- and fifth-tier cities, Lin Xiaohai, founder of Chan Yoga, the first professional yoga club in China, told the Global Times.

It even has entered the public school system in some cities across China. For example, a primary school in Shenyang, Northeast China's Liaoning Province, has included yoga in their morning exercise routines, sohu.com reported.

The Indian government aims to promote yoga as a non-religious activity globally and encourage more people to get to know India by practicing yoga, Lin, who is also director of the China-India Friendship Association, noted. Yoga was prioritized to the highest level after Modi suggested it as an international event.

During Modi's visit in China in 2015, he and Chinese Premier Li Keqiang jointly attended a Yoga-Taichi event in Beijing, with Modi saying that the "disciplines are a unique medium to connect the cultural heritage of the two countries," the Economic Times reported.

Lin also mentioned that the Chinese market for yoga-related businesses has enjoyed a rapid rise in recent years, which has created more than one million jobs in the industry.

"Many Indian Yoga teachers have come to China since 2003, and the number will keep increasing in the future," said Lin.

In an effort to promote yoga in China as well as encourage further bilateral cultural exchanges, Yunnan Minzu University, in Southwest China's Yunnan Province, and the Indian Council for Cultural Relations (ICCR) co-founded in 2015 the first specialized Chinese yoga school.

"As two bright pearls of the Oriental civilization, Chinese and Indian cultures share common ground… our school is a new platform for bilateral exchanges. Aside from yoga, students can also know more about Indian history, culture and its languages," Lang said.

He added that the university offers majors for Hindi languages and also launched personnel exchanges with institutes, enterprises and universities in India.

The Indian Embassy in China has also taken active measures to promote yoga in China.

According to an email sent to the Global Times by the Embassy of India to China, it organized week-long celebrations in June of 2017 to commemorate the 3rd International Day of Yoga, during which around 300 Chinese yoga enthusiasts came together at the Juyongguan section of the Great Wall in Beijing to practice various styles of Yoga.

"To carry forward the success" of previous yoga events, the Indian Embassy is scheduled to organize more events, festivals and movies, and is also working with various Chinese universities to hold Indian Cultural Weeks to further popularize Indian art among Chinese youth.

Yoga is not the only card India is playing to expand its soft power into China.

"Chinese audiences used to see fewer Indian movies, but India has strengthened efforts on exporting its films and TV series in recent years in an effort to promote its culture, especially to China," Zhao Gancheng, director of the Center for Asia-Pacific Studies at the Shanghai Institutes for International Studies, told the Global Times.

More Bollywood producers are being lured by the lucrative Chinese film industry, finding that it is not hard to entertain a Chinese audience, Zhao said.

Bollywood superstar Aamir Khan's family wrestling drama Dangal, small-budget by Bollywood standards, was released in China on January 19, topping all imported films with a total of $109 million in revenue in just 24 days, according to data from Ent Group.

"Different from American or European movies, Bollywood avoids exporting its values and usually focuses on social issues, which makes it easier for Chinese audiences to identify with it," Zhao said.

The success of Indian movies in China could be attributed to its mature business model. The latest popular Indian movies reduced their traditional dancing and singing numbers, focusing more on discussing social ills - such as discrimination against women and the wealth gap - but in an upbeat, joyous way.

Bollywood, considered a living example of cultural openness, has all the traits to emerge as India's "soft power" in the future, the Economic Times cited a Deutsche Bank chief economist as saying.

Zhang Zhi'an, an associate professor with the School of Communication and Design at Sun Yat-Sen University, agreed, telling the Global Times that Bollywood has truly played an important role in stretching Indian soft power into China via its movies, which can help erase past misunderstandings and lay a foundation for positive trade and cultural exchanges.

Zhang's remarks were echoed by Chinese netizens on the popular social networking site douban.com, where the most popular Indian movies in China (Dangal, Three Idiots and PK) have an average score of 8.0. Many netizens commented that they feel personally touched by these Indian films.

"Indian movies never try to burnish the image of their country, but they do dispel some misunderstandings about India. My impression of India has been unconsciously influenced by these movies," netizen lucydaniu, commented.

Zhang said that China's film industry is not yet as influential as Bollywood, but China's internet technology, including WeChat and Xiaomi phones, have surpassed pandas and kung fu to become the new force of China's soft power into India.

"Despite the tense military and political situation along the border, India has done better work in stretching its soft power, which is partly because of their pride in their culture and their efforts in protecting their traditions," Hu Zhiyong, a research fellow at the Institute of International Relations of the Shanghai Academy of Social Sciences, told the Global Times.

However, India should not ignore the fact that it has been left far behind by China in terms of economic and military developments as well as comprehensive national strength, Hu said.

"Modi wants to make India a country of yoga and use that soft power to attract more investment, technologies and assistance… and the stretching of soft power also aims to make up for the shortage of India's hard power," the commentary continues.

"But China should still learn from India, as its ways of showing off its soft power are more acceptable than some of China's government-support programs overseas," said Zhao.