CHINA Yoon proposes aid-for-denuclearization plan with 'some good faith,' but US remains 'a major factor' of influence

Yoon proposes aid-for-denuclearization plan with 'some good faith,' but US remains 'a major factor' of influence 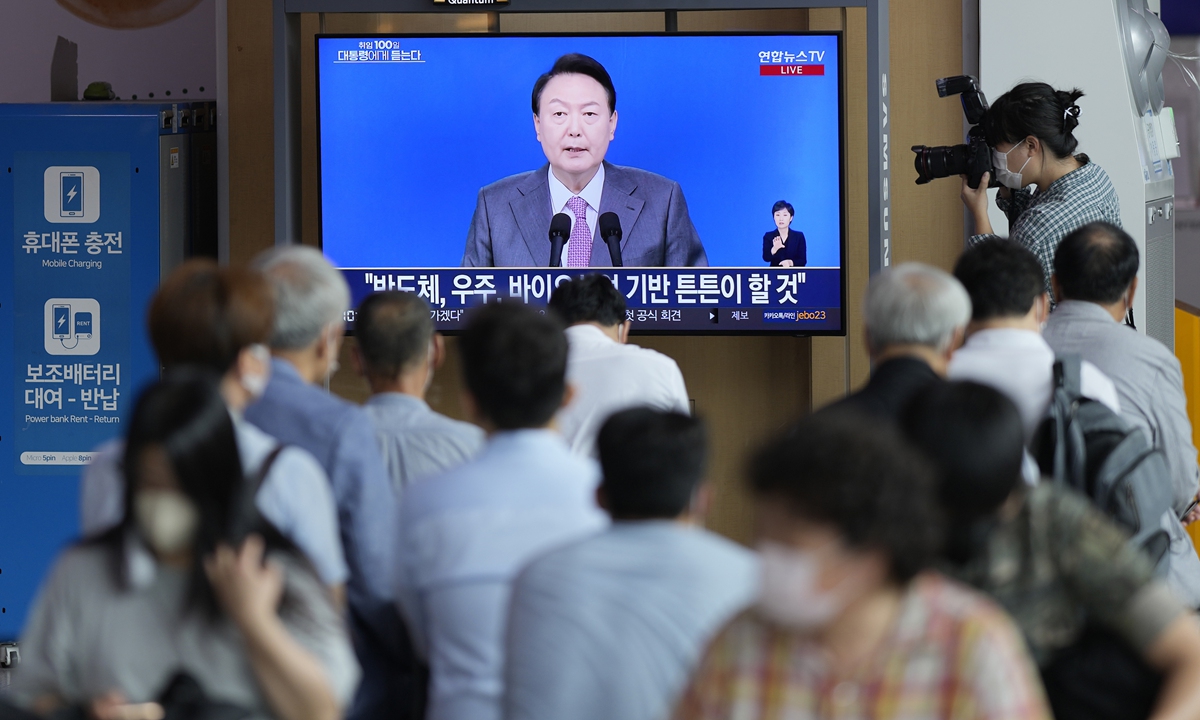 Chinese experts believe that the South Korean leader underscored some "good faith" in handling the matter, but the Korean Peninsula nuclear issue is in fact a matter of security and the US remains a major factor of influence in the matter.

Yoon made these remarks at a press conference marking his 100 days in office during which his diplomacy came into focus. His address not only showcased positive elements for improving the inter-Korean relations but also reiterated the intention of improving ties with Japan.

The Yoon administration has been making efforts to strike a balance between the major powers, but the overall trend of its diplomacy appears to be further enhancing the South Korea-US alliance, some experts said.

However, tying itself to the US' Indo-Pacific Strategy is clearly not in line with the realistic interests of South Korea, despite Washington ramping up its coercive efforts to push the country to "take sides," experts noted. It is necessary for Seoul to stick to a certain degree of autonomy by taking more actions to improve relations with neighboring countries including China, they said.

Yoon said South Korea has no hostile intentions toward North Korea, and is willing to carry out aid projects for the latter as long as Pyongyang takes substantial steps toward denuclearization, Yonhap News reported. He also referred to his proposal unveiled in his Liberation Day address on Monday, which was described as an "audacious" offer involving various programs such as a large-scale food program, assistance for power generation and infrastructure and ports. Those programs would be implemented in stages, according to the South Korean media report.

Yoon made some innovative suggestions, but looking back to the South Korean government's policies toward North Korea over the past 20 years, one would see his proposals are still within the scope of the conservative and progressive parties' policies toward Pyongyang, Yang Xiyu, a senior fellow with the China Institute of International Studies, told the Global Times on Wednesday.

"The so-called 'audacious offer,' which asks North Korea to abandon its nuclear program in exchange for economic assistance, won't work in reality because the Korean Peninsula nuclear issue is in fact a matter of national security," he said, noting that if no national security is guaranteed, other plans will not work out.

"Although Yoon has underscored 'good faith,' it remains unknown whether he can take concrete actions," Lü Chao, a fellow at the Liaoning Academy of Social Sciences, told the Global Times on Wednesday.

In East Asian region, the US continues to push forward the Indo-Pacific Strategy, especially by enhancing military cooperation with countries like Japan. South Korea has to yield to the US strategy for enhancing the South Korea-US military alliance, some experts said.

South Korea and the US will begin their biggest joint military training drills in years next week, and the allies' summertime drills, named Ulchi Freedom Shield, will take place from August 22 to September 1 in South Korea and include field exercises involving aircraft, warships, tanks and potentially tens of thousands of troops, US media outlet ABC News reported.

Although Yoon has made efforts to improve South Korea-China ties, the US always remains a major factor to influence these relations, Lü said, noting that the US has been pressuring South Korea to abandon its policy of not taking sides to hitch it to its "chariot" to achieve its Indo-Pacific strategy.

Especially, the current frictions between China and South Korea over the deployment of the Terminal High Altitude Area Defense (THAAD) anti-missile system are created by the US. "We hope this issue can be fixed in a practical way, which could then provide a sound guarantee for the future development of China-South Korea relations," Lü noted. "The South Korean government should not only make verbal commitments, but also needs to take sincerer actions."