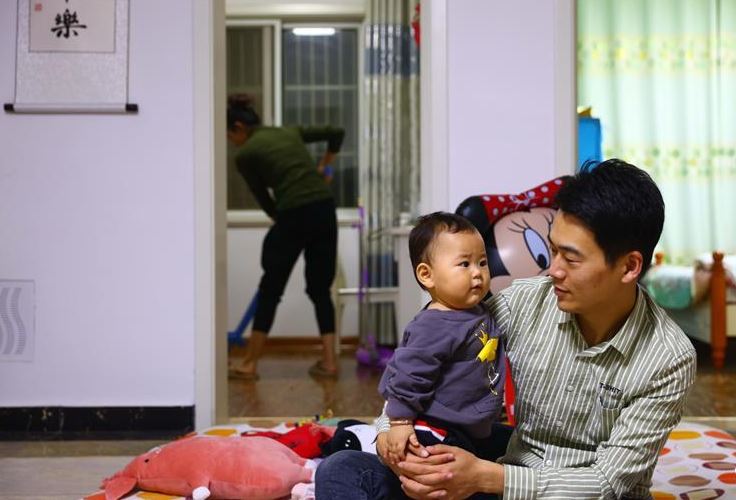 BEIJING, Oct. 9 (Xinhua) -- The skyscrapers and neon lights of Guangzhou and Hefei failed to allure Zhang Shaoyang, a 24-year-old teacher in Huoshan County in the city of Lu'an, eastern China's Anhui Province.

After graduating from the Guangzhou Academy of Fine Arts, Zhang worked in Hefei shortly before she returned to her hometown, where she earns a salary of 3,200 yuan (about 460 US dollars) a month.

Though the pay seems modest, Zhang tries her best to make life comfortable. Like many young adults in her town, Zhang buys top skin-care brands online, dines out with friends occasionally, and spends on her hobbies such as traveling and photography.

"I'm quite satisfied with the lifestyle I have in a smaller town," she said.

Zhang is one of the millions of young adults living in China's prefecture and county-level urban areas that are playing an increasingly important role in the country's changing consumer market.

Aged around 18 to 30, Internet-savvy, often with a college degree and a decent job that pays stable salary, these young adults in China's lower-tier but fast-developing cities and towns are becoming the new face of Chinese consumers, driving economic growth and offering abundant opportunities for companies to capture.

"While investors perceive larger cities as offering the most important consumer base, we believe that lower-tier cities will be bigger, wealthier and more eager to spend, and could contribute two-thirds of incremental growth in national private consumption toward 2030," said Robin Xing, Morgan Stanley's chief China economist, in a research report.

What underlies the changing consumer dynamics is the growing consumption power of small-town dwellers.

According to a report by McKinsey & Company, the growth rate of China's middle class, defined as urban households with annual disposable income of 60,000 to 229,000 yuan (or about 9,000 to 34,000 US dollars) in 2010 real terms, will be greater in smaller cities, especially in the north and west.

Smaller third-tier and fourth-tier cities, which had 2010 nominal urban GDP below 120 billion yuan, will see their share of middle-class households reach nearly 40 percent by 2022, compared with about 18 percent in 2002, according to the report.

Thanks to government initiatives that encourage economic integration and fairer income distribution, such as the recent revision of the individual income tax law, the income gap between big and small cities is shrinking.

According to the Morgan Stanley report, per capita, disposable income for families in China's smaller cities was 55 percent lower than those in top-tier cities a decade ago, while the difference decreased to 45 percent as of 2017 and will likely come down further to 36 percent by 2030.

For many young adults like Zhang, living in a small town means they do not need to worry about the skyrocketing real estate prices in mega-cities such as Beijing and Shanghai, and they will have more leisure time to spend money.

"I don't need to spend much on my apartment or commute. If I were to live in bigger cities such as Guangzhou or Hefei, I would definitely be under much more pressure," she said.

While deeper pockets create demand, the rise of e-commerce as a major way of shopping provides young people in small cities with a wide range of suppliers.

Chen Qian, a 23-year-old community worker in the city of Bengbu of Anhui Province, buys almost everything online. There is always something to be cleared in her shopping cart.

"All I need is Taobao. Then I am all good," Chen said, referring to the online shopping platform under Internet giant Alibaba.

According to a report conducted jointly by Boston Consulting Group (BCG) and AliResearch, the research arm of Alibaba, by 2020, e-commerce will become a far more important retail channel, driving 42 percent of total consumption growth, with 90 percent of that growth coming from mobile e-commerce.

"In addition to offering better prices and wider selections, e-commerce actually stimulates new demand in China by filling many needs that are not being met at brick-and-mortar stores," the report said.

While small-town consumers are becoming increasingly affluent, they do not always aim for the fanciest products.

The rise of domestic brands could be attributed to small-town consumers, who were the major targets of Vivo and Oppo, according to a report by the Suning Institute of Finance.

When it comes to cars, young people in small towns also tend to seek more cost-effective models, with sales of cars priced at around 80,000 to 180,000 yuan on rapid growth in third-tier or smaller cities, the report said, citing data from consultancy Roland Berger.

But the purchase of cheaper models does not mean young people in small towns lack the desire for a high-quality lifestyle.

Consumption of culture, entertainment and traveling are especially strong in small cities, with young adult consumers in these areas contributing a notable share to China's box office, according to the report.

This past summer, Zhang and her mother drove to Tibet. A week after the trip, she took her grandmother to Guangzhou and Shenzhen for sightseeing.

The trips cost Zhang 15,000 yuan, about five times Zhang's monthly salary. But Zhang was pretty content with what she achieved with her savings.

"I don't need too many luxuries. I just want to live my life to the fullest," she said.

For many international brands, first-tier cities such as Beijing and Shanghai may be their major targets, but the markets in small cities are just too big to ignore.

Companies will have to venture far beyond China's biggest metropolitan areas to win the loyalty of upper-middle-class and affluent households, said the report by BCG and AliResearch.

"There are high concentrations of such households in more than 2,000 Chinese cities. We estimate that to reach 80 percent of this market by 2020, companies will need to establish their presence in 430 cities," the report said.

Sportswear, jewelry and other consumer product companies may be the first to capture the newly-minted middle-class customers, according to the Morgan Stanley report.

"Additional discretionary income also bodes well for fast food and restaurant chains, especially because many have yet to expand into lower-tier cities," it said.

Some global brands have already started to act. In 2017, McDonald's announced plans to increase the number of its restaurants from 2,500 to 4,500 in the Chinese mainland over the next five years, with third- and fourth-tier cities as the focus of the expansion.

The company expects 45 percent of its China restaurants to be located in those cities by the end of 2020.

The cultural consumption market is also largely untapped. For young adults in small towns, Taobao could perhaps bring all kinds of goods, but they still have to travel a long way for a good show.

Chen is planning a trip to Beijing next month, where she will watch the drama "White Dear Plain."

"Life is all about experiences," the 23-year-old said. "I just want to experience more."