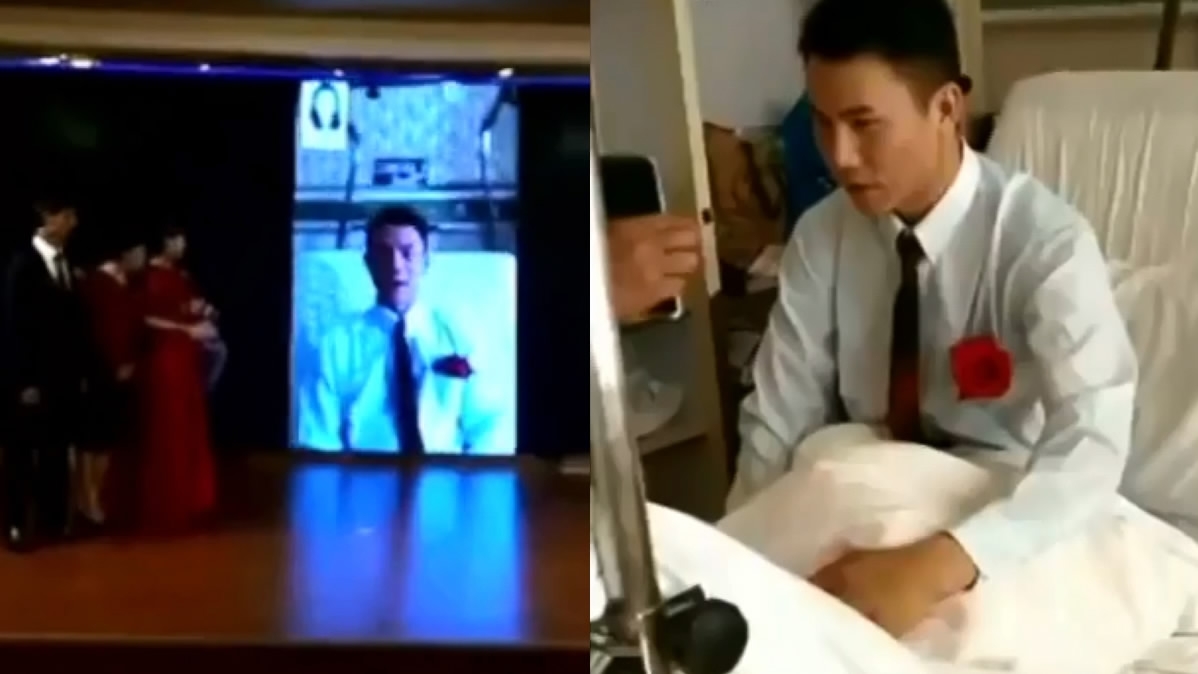 (Photo:Screenshot from a program on a  local TV station)

For most newly-married couples in China, getting their wedding certificate at the local city hall is one thing, but having a wedding banquet and tying the knot in front of  family and friends is something most to expect.

However, a special wedding ceremony was held last week in Lincang City, southwest China’s Yunnan Province, as the groom didn’t show up. Dressed in his wedding suit, this groom gave his vows via a video call from his hospital bed.

“I am the groom, I am so sorry that I could not be there because of this fracture I got from a car accident,” Mr. Yang said to the guests. “I hope you all enjoy your time at the banquet.”

Four days before the wedding ceremony, Mr. Yang broke his leg in a car accident in Kunming City, more than 500 km from Lincang City. He wasn't able to move and had to stay at a local hospital until his condition improved.

Mr. Yang told Pear Video that the wedding date could not be changed as the invitations had already been sent to guests days before the accident. Thinking that there was no other choice, the couple decided to go ahead with the ceremony as planned.

They never thought that this decision would attract so much attention from netizens online.

A video released on Monday, detailing Mr. Yang’s experience has received nearly 3 million views on Weibo, a popular Chinese social media platform. A local TV station has also conducted a survey on this whereby many citizens shared their thoughts.

Some people had advised the couple to hold off the ceremony until the groom had recovered, whilst others said that it is a once-in-a-lifetime event that shouldn't be rushed under such circumstances.

(Photo:Screenshot from a program on a  local TV station)

One of the interviewees said jokingly, "Or maybe she can find someone to replace him for the ceremony."