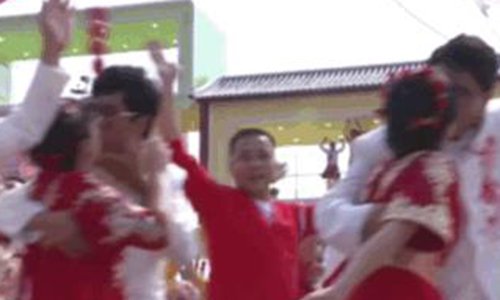 A young couple topped the search list of Chinese social media platforms after they kissed in front of millions of viewers during the live-stream of the grand parade marking the 70th anniversary of the founding of the People's Republic of China on Tuesday morning.

The couple appeared in the "beautiful life" phalanx during the civilian parade with hundreds of other couples. They kissed when passing Tiananmen Square.

The couple's kiss was one of the touching moments which made Chinese netizens speak highly of the Tuesday parade for its "down-to-earth" nature.

In the same phalanx, hundreds of takeaway deliverymen and couriers also appeared in the parade for the first time.

"From nuclear missiles to take-away delivery, you are all the pride of China." "Beautiful life comes from the efforts of all Chinese!" netizens commented.