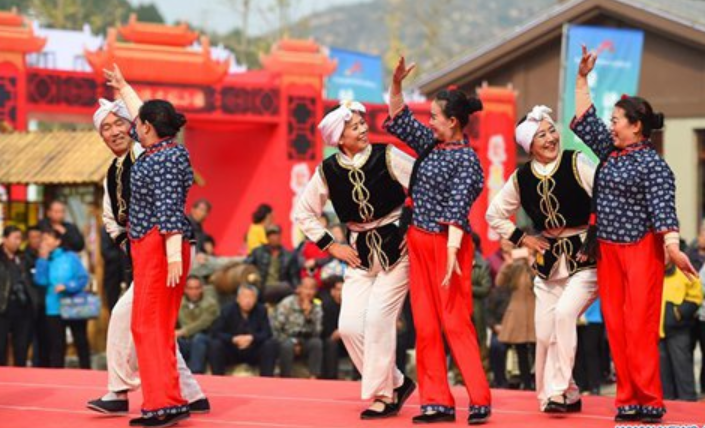 A performance is staged for tourists in Xibaipo, a former revolutionary base, in Pingshan County, North China's Hebei Province, October 12, 2018. Tourism industry has helped Pingshan get rid of poverty. (Photo: Xinhua)

More than 100 young entrepreneurs have gathered at a former revolutionary base in North China's Hebei Province to study the country's revolutionary history and patriotism, as part of a nationwide campaign to unite the private sector to contribute to society.China Business Times reported that 117 young entrepreneurs have gathered since Wednesday in Xibaipo township to attend a three-day study session organized by the All-China Federation of Industry and Commerce (ACFIC), a chamber of commerce led by the Communist Party of China (CPC) that links the Party and the government with people in non-public economic sector.Xibaipo is the most recent place where the ACFIC set an education base for non-public economic personnel after Jiangxi Province's Jinggangshan, which was home to the CPC's first rural revolutionary base in 1927, and former revolutionary base of the CPC in Yan'an, Shaanxi Province.Gao Yunlong, head of the ACFIC, said at the opening ceremony that the study session aims to lead the entrepreneurs in reviewing the revolution's history, help them inherit the spirit of revolution and raise their sense of home and nation.The event tends to inspire them to "combine self-development with national development, and combine the development of enterprises with social development," Gao said. Inviting young entrepreneurs to study the spirit of Xibaipo, which is to be modest and prudent and maintain hard work, showcases the importance of the private sector in the national economy, said Su Wei, a professor at the Party School of the Communist Party of China Chongqing Municipal Committee. Young entrepreneurs shall acknowledge that the development direction of the private economy shall be in line with that of the nation, as they share a common destiny, Bai Ming, deputy director of the Ministry of Commerce's International Market Research Institute, told the Global Times on Thursday.On November 1, 2018, Xi Jinping, general secretary of the CPC Central Committee, also Chinese president and chairman of the Central Military Commission, underscored the country's need to unswervingly encourage, support and guide the development of the non-public sectors and support private enterprises to develop a broader stage, when presiding over a symposium of private enterprises at the Great Hall of the People in Beijing, Xinhua reported.As an important part of the market economy, the private economy cannot be separated from the national economic system. The government is giving wide support to the private economy and believes it will continue to prosper just as China's development originated from Xibaipo and will continue to boom despite difficulties, Bai said.