The police in Golmud, Northwest China's Qinghai province, have confirmed the cause of death of a young vlogger who was traversing the Hoh Xil no-man's land alone. 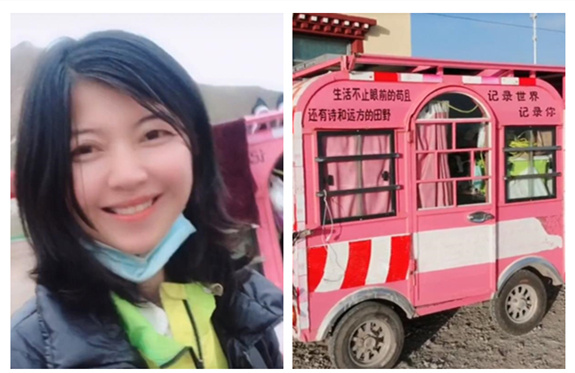 "Henan Meimei" and her trailer. [Photo from Sina Weibo]

The 22-year-old, nicknamed "Henan Meimei", was pulling a trailer at the No 109 national highway when she lost control of the vehicle, which subsequently ran over her, leading to her death, local traffic police said, according to a report of The Beijing News.

The woman was livestreaming her lone hike on the Qinghai-Tibet Plateau on Aug 21 when her screen suddenly went dark after a scream, which drew the attention of many netizens watching the live streaming.

The police later confirmed that her body was found stuck under her solar-powered trailer, and she showed no signs of life when the police arrived.

The woman started her journey from her hometown in Xuchang, Henan province, on May 1, and then traveled along the Qinghai-Tibet Highway.