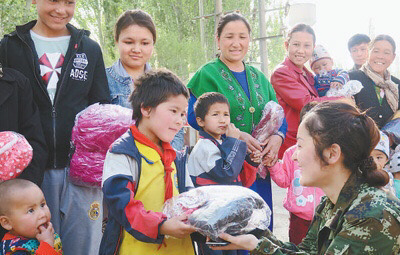 It is hard to imagine a girl in her 20s shouldering the burden of supporting a village. At the end of 2017, Askar came to serve as the first secretary of Barren village, Akto county, Kizilsu Kirgiz Autonomous Prefecture in Xinjiang. Within three years since her arrival, the village has witnessed great change.

‘Our secretary is young, but she’s helped us greatly in doing business’

From a rural housewife to the manager of a Xinjiang specialty shop with a monthly income of 6,000 yuan ($850), Bahtigul Mamati is still amazed at this change in her life.

Mamati has talked to Askar several times about finding work outside her village. It has inspired Askar to open a shop for villagers who wanted to leave their home to earn money. After Askar discussed this idea with Party poverty alleviation officials in Jiangxi, they chose Yingtan city as the shop’s location.

With Askar’s efforts, the products in the store, which is now run by seven villagers, have been included in the local consumer poverty alleviation product catalog, and are seen on the shelves of local supermarkets.

But Mamati has a bigger idea --  to open a store by herself. During Askar’s most recent trip to Jiangxi, she decided to open a branch in Jiujiang city in support of Mamati’s entrepreneurial dream.

“Our secretary is young, but she’s helped us greatly in doing business” Mamati told the People’s Daily.

With a small population and poor land,  the per capita cultivated area is only 867 square meters in the village of Baren.

But things started to look up after May 2019, when the village-owned enterprise, Xinren Building Material Company, went into operation with Askar’s help.

The enterprise has attracted more than 10 million yuan ($1.4 million) in investments and created stable jobs for 15 people, adding an income of 7.31 million yuan to the village that year. The company has also added public welfare positions through dividends and service purchases, which increased the income of more than 130 poor households by 1,200 yuan per month.

By the end of 2019, the per capita income of farmers in the village increased by 1,025 yuan year-on-year. This village that once had a poverty rate of 43.3 percent was lifted out of poverty.

“My work is worth it as long as villagers’ lives improve”

Although Mamati works in Jiangxi, she is not worried about her children back home. “They are placed in child care centers during the day, and their grandparents take care of them at night,” she said.

When she first arrived in Baren village, Askar learned that many left-behind children were unattended. She applied for a grant of 200,000 yuan ($28,274) and founded the first child care center in the county, taking 43 unattended children in. Later, a senior day care center was also established locally, which has 13 senior clients accessing the center’s services.

“There is care for the old and for the young, and my heart can rest,” Askar said.

“I would’ve lost my right hand without her,” said villager Amangul Abduriyim.

In October 2019, Abduriyim accidentally injured his right hand while operating a flour machine.  Not only did Askar immediately take Abduriyim to Kashgar for further medical treatment, she also helped raise money for his two surgeries, both of which were successful and saved his right hand.

“My work is worth it as long as villagers’ lives improve,” said Askar.