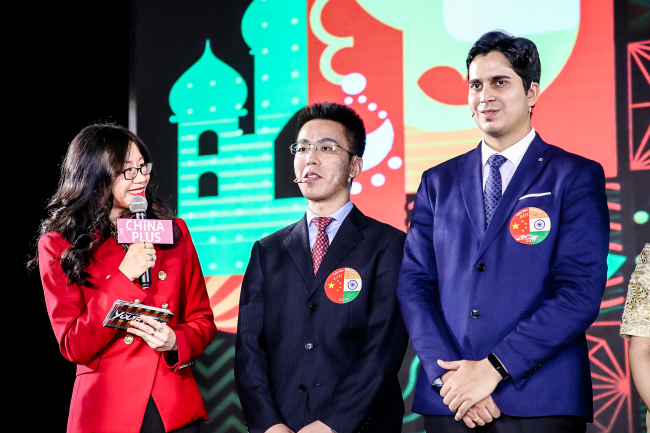 Zhou Heyang (left), from China Plus of China Media Group, talks with two of the participants at "China-India Youth Talks 2019" in Beijing on Saturday, September 28, 2019. (Photo: China Plus)

Young people from India and China took to the stage at a forum in Beijing to discuss how ties could be boosted between the two countries.

The event on Saturday afternoon, "China-India Youth Talks 2019", featured four people from China and four from India. All eight have experience living in both countries.

The guests shared their thoughts and ideas about how young people in the two neighbors could get to know each other better, embrace each other's cultures, and learn from each other.

"I'm so happy. I feel very privileged to be given this opportunity to come and speak about my experiences in China," said Seerat K. Banga, one of the youth representatives who has been studying and living in Guangzhou for nearly eight years. "I think we need more of these events. It makes positive feelings about each other. And it helps us understand each other better. So I think it's a very good effort," she says.

Lin Sheng is one of the Chinese youth representatives. He's Vice President of Bank of China’s Mumbai Branch. He says this kind of activity can help to promote bilateral ties.

"It's a good platform for the general public in the two countries to understand each other. I think this kind of people-to-people exchanges can make great contribution to the bilateral relationships between our two countries."

The young speakers were joined by Prasanna Shrivastava, the political counselor at the Embassy of India in China, who spoke highly of the event. He believes exchanges between young people are necessary and useful.

"The organizers, hosts, and participants must be applauded for the kind of creative, lively, yet very substantive discussion that you have put together. My congratulations again, for putting together this beautiful and wonderful program," he said.

China's ambassador to India, Sun Weidong, sent a video greeting to the event.

The audience was made up of around 150 college students. Purva Sheti is studying at Beijing Language and Culture University. She says China and India can strengthen their cooperation in the future.

"It's very meaningful and very important for everyone to know that China and India can grow together. And it's a very good thing that is happening."

Youth Talks is an annual event that aims to bring together young people from China and other countries to debate issues of common interest.

This year's event was co-hosted by China Plus and Hindi Service of China Media Group.