Young people have shown increasing preferences for flexible work — both in locations and schedules — because of the growing digital economy and emergence of new professions. 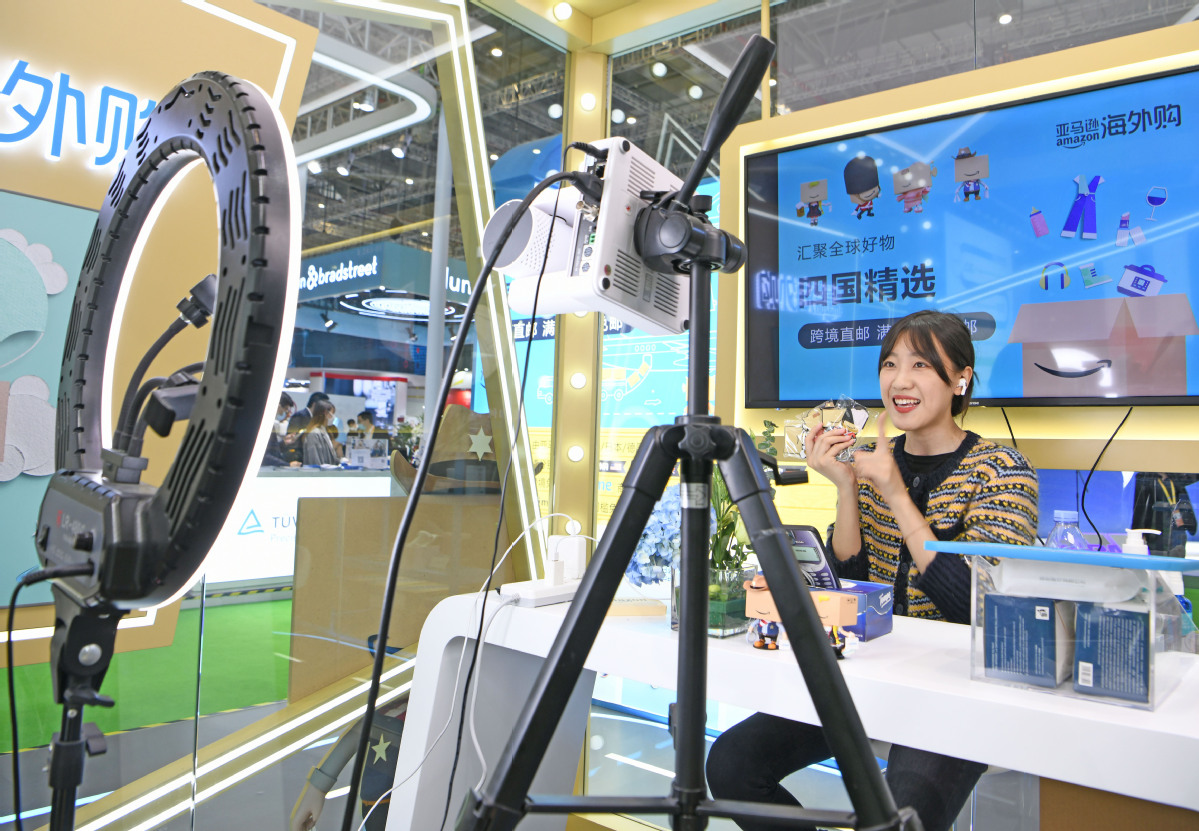 A livestreamer at work at the booth of Amazon during an expo in Shanghai. [CHEN BIN/FOR CHINA DAILY]

According to the Ministry of Industry and Information Technology, China's digital economy has increased by 15.9 percent annually since 2012, reaching 45.5 trillion yuan ($6.32 trillion) last year.

Facing the growing digital economy and new vacancies incubated in the sector such as deliverymen and livestreaming anchors, young people, especially those born after 2000, are expressing a stronger willingness for flexible work relations with companies, and also wish to become "digital workers" with flexible work locations and schedules.

A report by recruitment platform Zhaopin and Peking University's National School of Development released on Wednesday said that nearly 66 percent of surveyed employees born after 2000 prefer to work from home. The number is higher than surveyed people born after 1970, with about 54.4 percent of them preferring the new way.

The report said that about 76.4 percent of these young employees born after 2000 have a willingness to be flexible "digital workers". Also, roughly 54 percent of employees surveyed have side jobs using their professional skills, according to the report.

"The internet can do anything for me. I check emails from my clients and submit my proposals through WeChat, then we discuss plans via teleconference. I love working from home actually," said Mi Lu, a 28-year-old new media operator in Beijing. "It's a much more convenient and cool thing. We work everywhere, perhaps in a cafe, or on a bullet train or even on the table of a restaurant."

To cater to young people's work preferences, more companies have begun to include "flexible working mode" in their recruitment advertisements.

Zhaopin said vacancies with flexible work available make up 15 to 20 percent of total vacancies on its platform, especially for industries in the growing gig economy such as transportation and logistics.

According to Zhaopin, the proportion of flexible vacancies in these industries has increased to 25 percent this year, up from 10 percent in 2018.

Hu Jiayin, an associate professor with Peking University's National School of Development, concluded that their survey shows that young people desire freedom in their jobs, but also wish for stability in their careers because of uncertainties brought by the fast-changing digital economy.

"In our survey, about 10 percent of people choose flexible jobs like being a blogger or doing side jobs like food delivery to get out of traditional labor relations with their employers," she said.

"But the development of the digital economy also brings great uncertainties and a sense of insecurity to the working population, so we've found some interesting things during our surveys that over 30 percent of job seekers we've surveyed wish to have a stable job at State-owned companies," she added.

However, the flexibility may bring risks to workers' rights protection, according to Zhaopin. It said that though roughly 60 percent of companies posting vacancies on its platform offer insurance, the proportion is decreasing.

Li Qiang, vice-president of Zhaopin, said that the greatest risk to those seeking flexible work is whether the company pays the salary fully and on time.

"It's necessary for job seekers to set up a long-term development plan, rather than be shortsighted."

He added that companies may bear risks that flexible employees can't deliver high-quality work in a limited time period, which requires the companies to establish a sound work delivery standard to help evaluate employee performance.