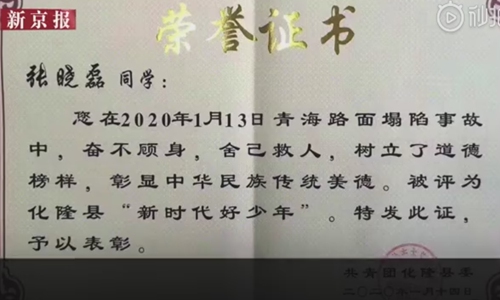 A 13-year-old schoolboy who narrowly escaped with his life while attempting to help others as a city bus was inexplicably swallowed by a sinkhole that killed nine people, has been honored as "a good young man in the new era."

The bus had stopped to pick up passengers on a city street in Xining, Northwest China's Qinghai Province on Monday, when the earth suddenly gave way and most of the bus slowly disappeared front first. Seventeen people were injured, including the boy named Zhang Xiaolei.

Video from a traffic camera of the tragic event shows Zhang, wearing a yellow jacket, is the first person to dare to approach the perimeter of the slowly expanding crater. He's seen crouching down in an attempt to help someone, when the ledge he is perched on suddenly gives way and he tumbles into the pit.

Netizens have heaped praise on Zhang and many sent notes of encouragement for a speedy recovery. Reports say Zhang remains in hospital but is expected to be discharged over the weekend.

On Wednesday the Community Youth League of Haulong county presented Zhang with a commendation for "demonstrating the traditional virtues of the Chinese nation."