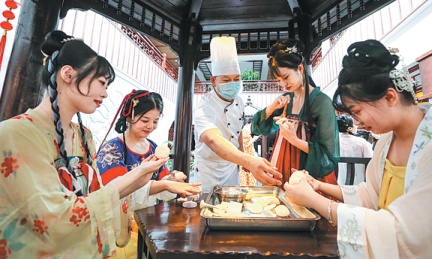 As Niulang and Zhinyu (the cowherd and weaver lady) await their annual reunion at the approaching Qixi Festival- Chinese Valentine's Day -which falls on Saturday, young Chinese people seem to be disconsolate about being alone.

Tian Xiao, 32, received a message on Tuesday morning that the matchmaking party she registered for during the Qixi Festival had been canceled due to tighter restrictions against the novel coronavirus in Beijing.

"It's disappointing because I will spend the romantic night alone," she said, with a wry smile. Working at a primary school, Tian said that most of her colleagues are women, so she planned to get to know some men at the party.

Though yearning for love and romance, the younger generation has shown less enthusiasm for marriage. The latest figures from the Ministry of Civil Affairs show that the nation's marriage rate has seen a continuous decline from 2013.

Contrary to the slumping marriage rate, the divorce rate has registered a rise, climbing to 3.73 million couples last year while only 580,000 couples chose to end their marriage back in 1987.

"It's because of the high price of housing, and future cost of education for children. It's really hard to cover them all by myself," Tian said, explaining her reasons to get married. "But my friends told me that my standard for a future husband is a little bit high, as he needs to have hukou (household registration) in Beijing and an apartment in the city.

"But it's the reality, I need some assurance for my future life. Marriage is different from just having a romantic relationship. An ample material life is a must for marriage, or it won't last very long, at least to me," she said.

"I will marry the one that suits me, no matter how old I am. Marriage is not makeshift but the icing on the cake," she added.

Tian is not alone. More young people prefer later marriage. A recent report by a research team under Ren Zeping, a former economist with the Development Research Center of the State Council, shows that the group aged from 25 to 29 has become the main force for marriage, accounting for 34.6 percent of newlyweds in 2019, up 0.3 percentage points from 2005.

The previous mainstay for marriage－the group aged between 20 and 24, however, saw a sharp decrease to 19.7 percent of the total newlyweds in 2019. The group accounted for almost half of all newlyweds back in 2005, at about 47 percent.

Except for unaffordable housing prices and high education costs, the younger generation's stronger sense of independence has also dampened their enthusiasm for marriage.

A report by online matchmaking agency Zhen'ai in May showed that finding it hard to fall in love, having high standards for potential partners and having an unsociable character were the three major reasons that so many remained single.

However, the nation's younger generation is far from discouraged. The report said that nearly 80 percent of those surveyed had registered with matchmaking social networks, and 40 percent said that they worked hard to increase their wealth in order to be more attractive to potential partners.

"I'm afraid of marriage, but I don't resist it," said Yao Minxing, a 28-year-old salesperson in Qingdao, Shandong province.

She said that she often joins parties or gatherings, no matter whether they are organized by her company or her friends.