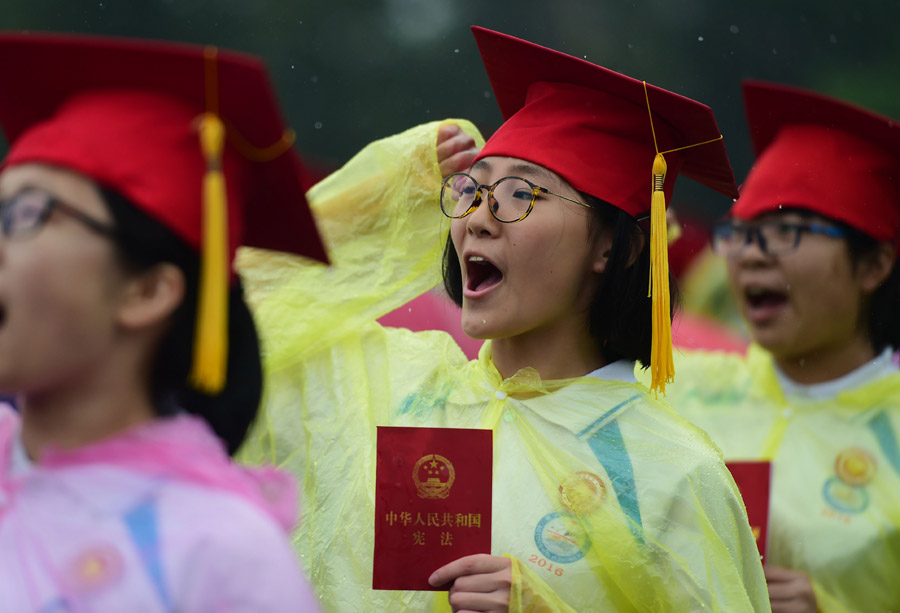 Students hold copies the Constitution during a coming-of-age ceremony in Cangzhou, Hebei province, on May 21, 2018. [Photo by FU XINCHUN/FOR CHINA DAILY]

Guidelines for coming-of-age ceremonies were released recently by the Central Committee of the Communist Youth League of China, aiming to strengthen the social values of young people in China.

The guideline consists of nine parts, including the ceremony's main purpose, major participants, basic procedures and oath. It covers all high schools and vocational schools nationwide.

Virtually all students in China age 15 or older are members of the youth league. At around 18, many will participate in a coming-of-age ceremony.

The guideline suggested it be held on Dec 4, National Constitution Day. Other options include May 4, China's Youth Day. The ceremony can be held at a school or in other venues focused on patriotism or other forms of education.

The icon for the ceremony is the number 18 in Arabic numerals, arranged in the form of a flying bird. And the oath emphasizes the characteristics should adopt as adult citizens in the new era, and suggests how they should shoulder their responsibilities.

It said the healthy development of youth is highly valued by the central leadership, and the ceremony will strengthen young people's legal consciousness and sense of social responsibility, which will contribute to their determination and courage to build the country into a more prosperous place.

A coming-of-age ceremony has signaled the entry of young people into adulthood since ancient times in China. Only after the ceremony are young people referred to as adults.

Many schools in China conducted the ceremony in various forms for students nearing completion of high school.

In April, more than 50 girls in traditional Chinese clothing took part in a coming-of-age ceremony to mark their entry into adulthood near Hancheng Lake in Xi'an, Shaanxi province.

With the support of several departments, 300 students in Beijing had special activities earlier this month. They took a high-speed train to Shanghai and listened to lectures by representatives of various fields during the trip.

However, other young people celebrated their entry into adulthood in improper ways. Last year, two young people in Jiangsu province were detained for stealing a painting a day after their 18th birthday, Jinling Evening News reported. They told the police that they just wanted to come of age in an exciting way.

The Central Committee of the Communist Youth League of China has revised guidelines for the coming-of-age ceremony three other times since it was introduced in 1996.

It aims to better regulate the ceremony nationwide to make it more meaningful in educating youth.