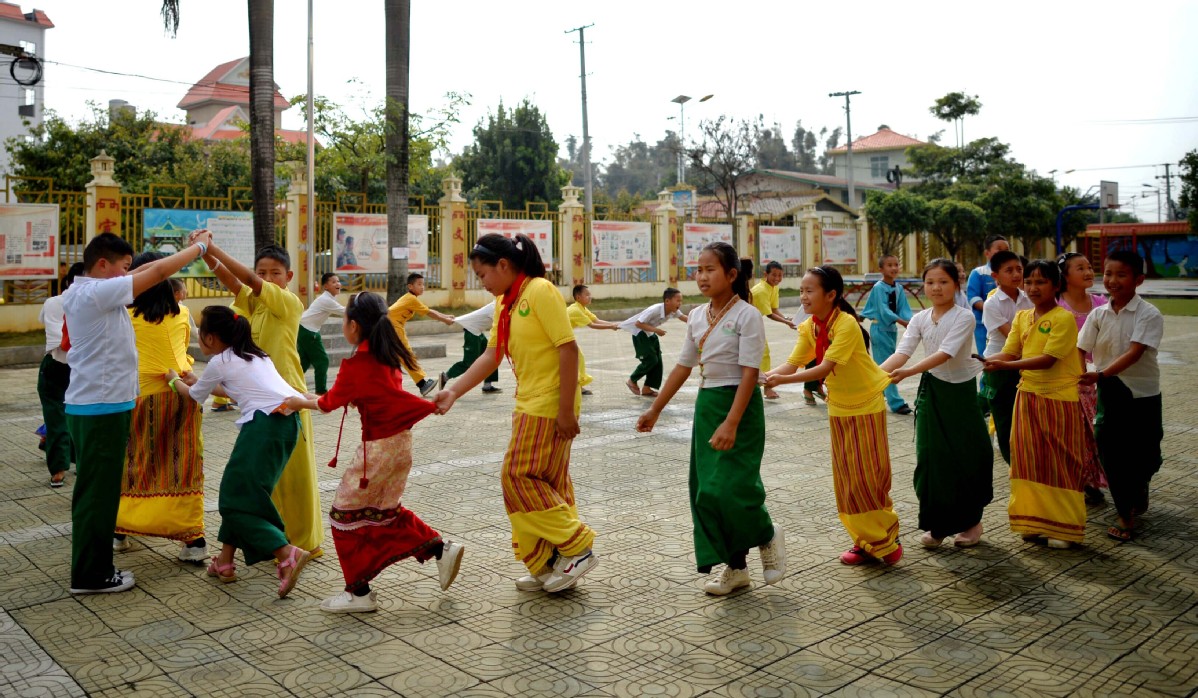 Chinese and Burmese students play games at a primary school in Yunnan province during a class break. (Photo: Xinhua)

Every morning, dozens of students from Myanmar walk hand in hand across the border into China's Yunnan province.

There, they are led by patrol officers to Yinjing Frontier Primary School. After school, as they are escorted to the border inspection station, they wave, tell the officers goodbye and return to their homes in Myanmar.

The students attend the first frontier primary school in China. Located in Yinjing village in the small border city of Ruili in Yunnan province, the school has 36 Myanmar students and 99 Chinese students. Founded in 1960, it has been admitting students from Myanmar since 1990.

Wen Liang, 10, from Myanmar, has repeated this routine for three years. "I like going to school in China. It makes me very happy because I have many friends there," Wen said.

"Most Chinese and Myanmar students are Dai people and some of them are relatives, so the close ties between them are not broken by national borders. What the school has been doing is to further strengthen the special bond between the two peoples," he said.

The school has preschool classes and first through third grades and all classes are taught in Chinese, Dai dialect and Burmese, Sun said, adding that students can take advantage of free tuition and nutritious breakfasts.

Jie En, 11, a Myanmar student at the school, said, "The teachers do not treat us differently because we come from a different country, and people cannot tell whether we are from China or Myanmar because we can also speak fluent Chinese."

Myanmar students only need to show proof of identification and a birth certificate to register at the school and are allowed four entries into China a day, he said.

More Myanmar parents are willing to send their children to the school because speaking fluent Chinese is necessary for them to work in China or do business with China, Sun said.

The government in Ruili has invested 2.6 million yuan ($388,000) in improving school facilities, including building a new school building, canteen and playground. The school has established a special foundation with donations from teachers, parents and officers at the inspection station to sponsor impoverished Chinese and Burmese students in pursuing their studies, he said.

Ruili, an important land port for southwestern China, is described by a famous Chinese song, There is a Beautiful Place, which describes its natural beauty and colorful folklore.

At the school, the students also can be heard singing another song, "Two countries, one school, hand in hand, heart to heart, forever love."