Zero infections reported among staff in Chinese-invested companies in Iran 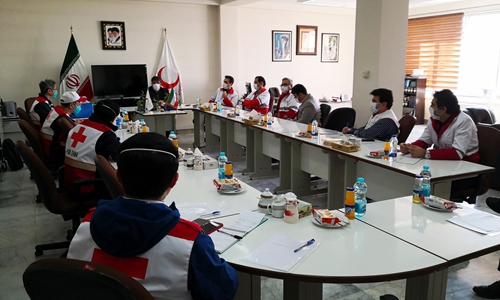 Experts from the Chinese Red Cross medical team in Iran hold a meeting with the Iranian Red Crescent, sharing experiences in combating the COVID-19. (Photo: GT)

No staff members, either Chinese or Iranian, in Chinese-invested companies in Iran have been infected with the coronavirus, as these companies adopted some of the epidemic prevention measures that have been proved effective in China, the Chinese Red Cross medical team in Iran told the Global Times in an exclusive interview.

Meanwhile, the daily testing ability for coronavirus in Iran has increased from 200 tests on February 29 when the medical team first arrived, to 6,000 tests as of Friday, and the figure is expected to further increase to more than 10,000 daily next week thanks to the joint efforts made by all parties in Iran as well as with China's assistance.

The number of laboratories that have the capability to carry out nucleic acid testing has also risen from three to 30 as of Friday and is expected to expand to 50 next week, Ma Xuejun, a research fellow at the Chinese Center for Disease Control and Prevention and an expert with the medical team in Iran, told the Global Times on Friday.

The volunteer group of medical experts sent by the Red Cross Society of China comprises five experts who arrived in Tehran on February 29 as part of efforts to help Iran the worst-hit country fight against COVID-19.

However, a large gap in the country's testing ability still exists as the situation in the country continues to deteriorate. Confirmed cases of coronavirus infections reached 13,938 on Sunday with the death toll from the virus rising to 724, according to an Iranian health ministry official, Reuters reported. But many people speculated that this figure might be just the tip of the iceberg and the actual infected cases could be much higher, given the country's poor testing and treatment capabilities.

Ma said that the improvement in testing ability could help Iran determine the actual number of people who have become infected, which will also help with the arrangements for quarantine and treatment.

Medical experts said the reported number of infected cases is related to the country's testing ability.

According to Ma, although Iran has a good laboratory foundation, it does not have the ability to produce its own nucleic acid test kits for coronavirus. Currently, the test kits mainly come from donations from China and the WHO. China previously donated about 70,000 testing kits to the country.

The WHO is also coordinating the next shipment of testing kits and other medical supplies to Iran, he said.

Compared with other countries, Iran has a high number of high-level officials infected with coronavirus, including the country's vice president.

Zhou Xiaohang, leader of the medical team, told the Global Times on Friday that when the team first arrived, Iranian officials seldom wore masks when they had meetings with the team members. "But now, Iranian officials are beginning to wear masks when they have meetings with us, as well as at their own high-level meetings," Zhou said. "Generally speaking, Iranian people's awareness of the virus has improved significantly."

Zhou said that Chinese-invested companies in Iran have taken stringent measures including closed management, disinfection, body temperature checks and wearing masks. As a result, there has been zero infection among all employees.

But Zhou noted that the serious shortage of medical resources is a great obstacle for Iran's epidemic prevention work. The team has paid visits to Iranian health authorities and several medical institutes and hospitals over the past 14 days, and found that medical staff's protective gear is ineffective and that they are also short of protective clothing and high-standard masks.

Zhou said that local hospitals are still under huge pressure and many patients with mild symptoms are advised to stay at home for quarantine. Iran is also trying to build more makeshift hospitals, but it's unclear whether there will be enough beds for patients after these improvised hospitals are built.

In places that have been hit hardest by the virus, which include Qom, Qazvin and Tehran, the makeshift hospitals have been built that can accommodate between 10 and 200 patients, according to China Central Television.

Farnaz Shirani, a PhD candidate at the Xiamen University in East China's Fujian Province, has several relatives working in hospitals, including her brother. She told the Global Times, "The capacity of hospitals has been reached but the number of patients is increasing every day. Doctors and nurses have been facing a shortage of medical equipment and we have already lost many of our nurses and doctors, and if this situation continues, we will, unfortunately, face a shortage of professional medical personnel in Iran."

Another challenge, according to Zhou, is persuading Iranians to avoid public gatherings and networking activities. There are far fewer people on streets in Tehran now, but as the country prepares to celebrate one of its most important festivals - Nowruz - on March 20, Zhou cautioned the country against letting its guard down.

The medical team has shared China's experiences in epidemic prevention with the Iranian health ministry, medical institutes, communities and Chinese-invested companies and groups in Iran.

However, as the national situation in Iran is different from China's, many measures taken by China cannot be replicated in the country, Ma said.

In Iran, coronavirus-infected patients simply have to show that they are not suffering breathing difficulties, fever, cough and other symptoms in order to be discharged from hospital. They do not have to have the nucleic acid testing like patients in China do.

"Given Iran's current testing capabilities, we think it fits their reality as well. It's impossible for them to give patients two nucleic acid tests before discharging them from hospitals like China does," Ma said.