The Intermediate People’s Court of Hanzhong, Shaanxi Province sentenced Zhang Koukou to death for intentional homicide and intentional destruction of property on Tuesday.

Zhang killed three men and set fire on a car last year as revenge for his mother. 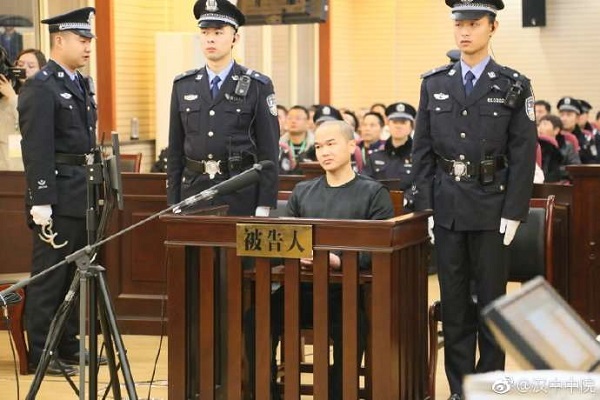 Zhang, a villager from Hanzhong, reportedly stabbed three neighbors with a knife on February 15, 2018, which was the New Year's Eve according to the Chinese lunar calendar. The attack left two men dead on the spot while the third succumbed to injuries in the hospital.

The local government said Zhang followed Wang Zhengjun and his elder brother on New Year’s Eve and on their way back home. Zhang allegedly used the knife to stab the two men several times.  The suspect then went to Wang's residence and reportedly killed the victims' father.

Zhang was detained on February 17 after he turned himself in.

Police said Zhang had a strong animus against the Wang family, because Zhang's mother died after Wang Zhengjun, the third son of the family, injured her head with a stick during a quarrel in August 1996.

The then 17-year-old Wang Zhengjun was sentenced to seven years in prison for causing intentional injury at the end of that year, and the family was ordered to pay more than 9,600 yuan ($1,510) in compensation.

(Compiled by Zhang Jian; with input from China Daily)