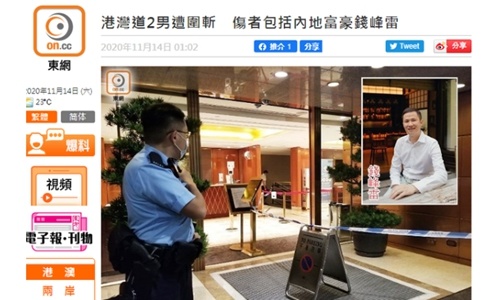 According to Hong Kong-based on.cc, Qian and a man surnamed Fang were attacked by three to four men with knives when leaving the Dynasty Club in Wan Chai after midnight on Saturday night. Qian was hit on the leg and the attackers escaped. Qian and the man surnamed Fang were sent to a hospital immediately and their injuries were not life threatening.

Qian, born in Zhejiang, is the chairman of Zhejiang Highfund International Holdings Co. The official website of the company said Qian has "invested in trade, construction, technology, internet, finance and other fields for many years. His investment and business activities spread all over the world."

He is famous for his charity activities including donation to those affected by the 2008 Wenchuan earthquake, the 2010 Yushu earthquake and the 2013 Ningbo flood, according to thepaper.com.