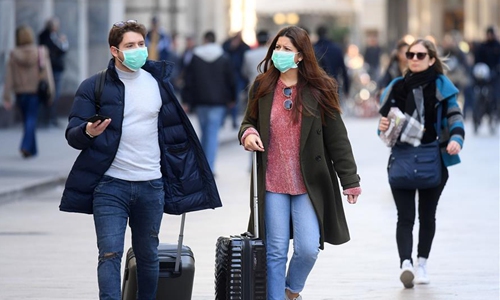 Among 20 imported cases of COVID-19 in China as of Thursday, East China's Zhejiang Province has reported 10, all from Italy which saw the biggest outbreak in Europe. This has prompted local authorities to mobilize special teams and share big data to track every one of them down to prevent further infection domestically as some may lie about their illness.

Some returnees confirmed to be infected have deliberately hidden their history of consuming medicine and lied about their whereabouts in foreign countries. Some might have been infected en route from Italy to China due to long flights, leading hundreds of people to be quarantined.

More Chinese may return from Italy as the European country is facing mounting pressure of epidemic control with more than 3,000 cases as of Thursday, which raised alarms to local governments in tracking returnees' health and travel routes, especially Qingtian and Wenzhou, hometowns for many overseas Chinese in Italy.

Qingtian formed airport service teams from February to pick up and quarantine returnees from all foreign countries at airports in Shanghai, Hangzhou and Wenzhou upon their arrival, local government officials told the Global Times. The three airports are the most popular hubs for overseas Chinese who are originally from Zhejiang Province.

The closed-loop system prevents them from contacting others and posing dangers to more people, an official for the Qingtian government surnamed Chen, who is now stationed in Shanghai, told the Global Times.

In case people return through other smaller airports, the Qingtian government has adopted a series of measures to make sure "returnees cannot hide," Chen said. Local communities in Qingtian would go door-to-door to inspect and register people who recently returned from abroad and the government also offers cash rewards for people who report hiding returnees.

Counties in Wenzhou, home to about 800,000 overseas Chinese, set up hotlines, working teams and a big data registration system to trace those overseas who want to return. In Wenzhou's Wencheng, everyone who plans to go back must register their passport, flight information and health condition in its big data registration system through scanning QR codes. Chartered buses would pick up them upon arrival and take them to quarantine centers.

Officials in Wenzhou's Rui'an called each of its 7,853 overseas Chinese who planned to reside permanently in China to track their recent travel history. The county also opened platforms for overseas Chinese to register their personal information before going back.

To locate those returning from epidemic-stricken areas, National Immigration Administration officials screen travelers via big data analysis before international flights arrive in China, and share that information with customs and local authorities.

There are not many effective methods to detect people who lie about their illness, said Zhou Zijun, a public health expert at Peking University. Screening body temperatures may find abnormalities, but it won't work if the returnee has taken fever pills, Zhou said.

The chance of a potential virus carrier infecting others is pretty high, as the person will make contact with people in different places and spend hours on an enclosed airplane, Zhou said.

A woman flew back from Italy was tested positive on Sunday. She had been taking medicine since showing fever, cough and diarrhea on February 16.

Legal experts warned that those who lie about their illness and cause transmission to others may face severe punishment. Hindering the prevention and treatment of infectious diseases may lead to as much as seven years in prison, according to China's Law on Prevention and Treatment of Infectious Diseases. If the behavior constitutes the crime of "endangering public security," the ceiling is the death penalty.

Most residents reached by the Global Times don't feel much fear about the returnees, believing the local government in Zhejiang would take strict measures to combat the disease, given that the province's previous control work has been effective. But they despise people who knew they had coronavirus symptoms but still brought the virus back to their hometowns, saying it is a "selfish and irresponsible behavior."

Some residents in Zhejiang suggested their overseas friends not come back at this critical time. "A friend of my mother in Italy planned to return earlier as she believed China is now safer than Italy. But she was convinced by my mom to stay in Italy to reduce possible risk of virus transmission and infection," a resident in Wenzhou surnamed Wang told the Global Times.