Zhejiang province is working on a unified health QR code system to prevent the spread of the epidemic and support its residents' health to help them resume working. 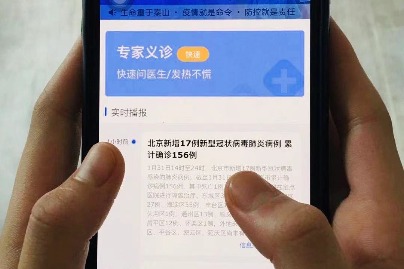 In Hangzhou, capital of the province, a health QR code system was launched on Tuesday. Residents and those coming to the city need to apply online and get their own code categorized by green, red or yellow. The colors are based on the health information applicants give.

Those who plan to come to Hangzhou need to obtain a green code, and only those with green codes may travel around the city. Those with red or yellow must undergo seven to 14 days of quarantine.

Meanwhile, the province began to assess the risks of the novel coronavirus infection in all its counties and districts and unveiled a list of regions with different risk levels on Monday, hoping to further improve prevention and control.

Sun Liming, deputy director of the Zhejiang Health Commission, said at a news briefing that the provincial government had evaluated the risk of people being infected with the virus in different regions based on indicators including the number of confirmed patients, the ratio of patients to all residents and cases arising from gatherings.

Yueqing, a city with 155 confirmed cases of the virus as of midnight on Sunday, is identified as the only highrisk region.

Twelve counties and districts in Zhejiang where no confirmed cases have been found so far, including Chun'an, Anji and Wuyi, are low-risk regions, according to the list.

Feng Kui, a scholar in city management at the National Development and Reform Commission, told news portal Yicai.com that classifying regions based on the severity of the novel coronavirus spread is valuable in making policies and preventive measures.

The main task for places that are slightly affected by the outbreak should be strict management over the entry and exit of vehicles and people, he said, adding that as long as the gates are controlled, it would be possible for local companies to resume production.

Zheng Keqiang, an expert in social governance and economic development at Nanchang University, told China Daily on Tuesday that the whole country is exploring effective ways to curb the coronavirus spread.

"It is unknown if classification management will work in the prevention and control of the virus," Zheng said, noting that further observation is needed in the following days.

For individuals, the list of regions with risk levels is a direct reminder for people, especially community workers and deliverymen, to take steps to avoid infection, said Xu Dewei, a Hangzhou resident.

"My family currently stays in Fuyang district, which is a comparatively low-risk region. So we won't go back to Xihu district where our home is for now, because the risk level there is moderate," she said.

Nationwide, a number of less-infected regions have taken a raft of measures to thoroughly screen out potential infectors and promote the gradual resumption of work.

In Guizhou province, for example, about 37,000 people, such as those who returned to Guizhou from Hubei have taken nucleic acid tests, among which 60 samples tested positive.

Over 10 test-takers among those 60 had no clear symptoms of infection.

"Patients with no clear symptoms pose a big challenge and risk to our next step in preventive efforts. It is imperative to locate them and put them under medical observation or control," said Zhang Yuqiong, director of the Guizhou Center for Disease Control and Prevention on Monday.