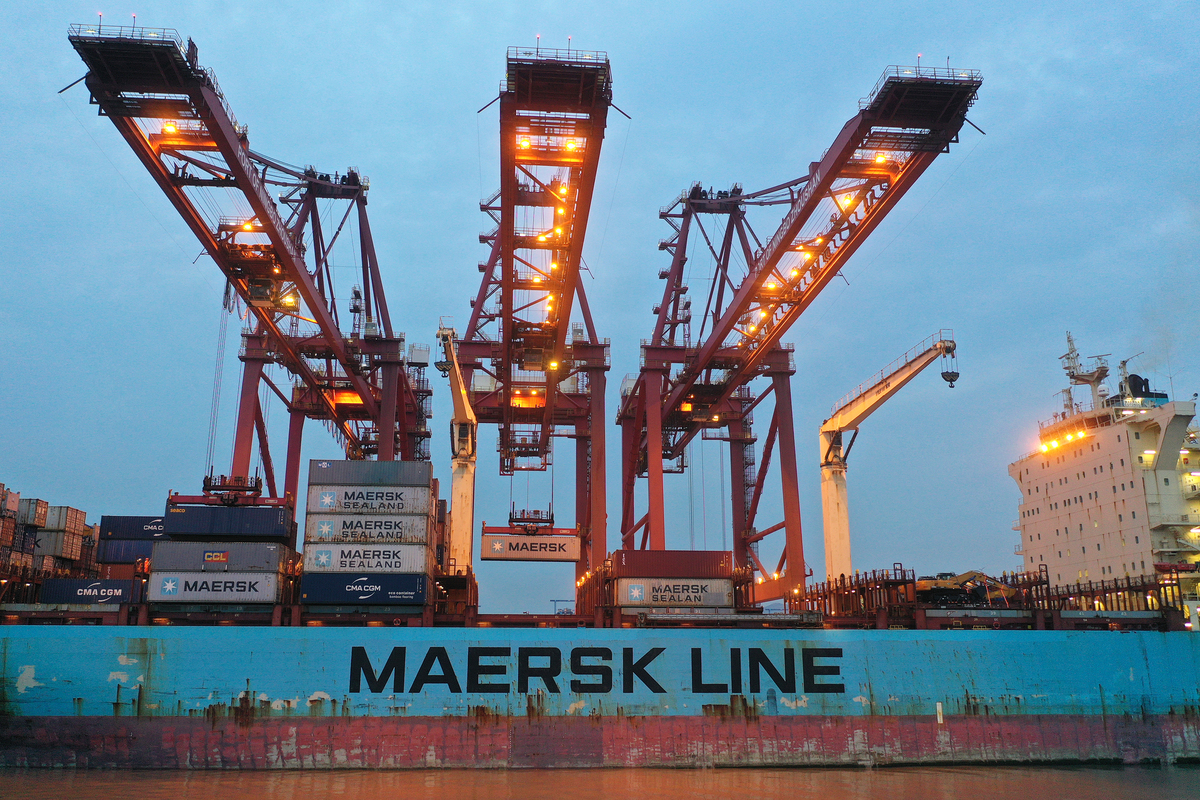 A container vessel is berthed at the Jintang port area of Ningbo-Zhoushan Port in Zhejiang province in July. [Photo by Yao Feng/For China Daily]

Ningbo-Zhoushan Port in Zhejiang province is expected to play an increasingly prominent role in the building of China's new "dual-circulation" development pattern over the coming five years, said business leaders and experts.

Jiang Wei, board secretary of Ningbo Zhoushan Port Co Ltd, said integrated sea and rail transportation is the key to promoting imports and exports of cargo from China's inland regions, and the number of containers handled this way by the port is a clear indication that the new model of development, in which the domestic market is the mainstay and the domestic and international markets complement each other, is clearly taking shape.

Three of the 19 areas of Ningbo-Zhoushan Port－Zhenhai, Beilun and Chuanshan－now operate a total of 17 freight train routes connecting with 15 provincial regions, including the Tibet and Xinjiang Uygur autonomous regions, as well as European countries such as Germany and Hungary.

"We have faith in China's economy as the country prepares for the 14th Five-Year Plan (2021-25), and we believe we will have solid foundations to progress further," Jiang said.

And the figure for October is expected to see a year-on-year increase of 29.5 percent, the company said on Nov 3.

Integrated sea and rail transportation is playing an increasingly important role in Ningbo-Zhoushan Port's operations, with the total annual volume of trade carried this way expected to exceed 1 million standard containers by the end of 2020, having already grown by 23 percent year-on-year in the first three quarters.

One of the latest examples of this integrated transportation strategy was seen with the departure of a freight train from Ningbo-Zhoushan Port on Oct 30 carrying 100 standard containers of cargo for the trading hub of Yiwu, Zhejiang province.

The considerable progress made by Ningbo-Zhoushan Port comes as China's economy recovers from the COVID-19 pandemic with the help of government measures to support hard-hit companies and prevent and control the pandemic.

China's GDP grew by 0.7 percent year-on-year in the first three quarters, turning positive after a contraction of 1.6 percent in the first half.

Ying Xiwen, a senior researcher at China Minsheng Bank Research Institute, said the third-quarter indicators proved that China's economy powered ahead of other major economies amid the global economic gloom incurred by the pandemic. 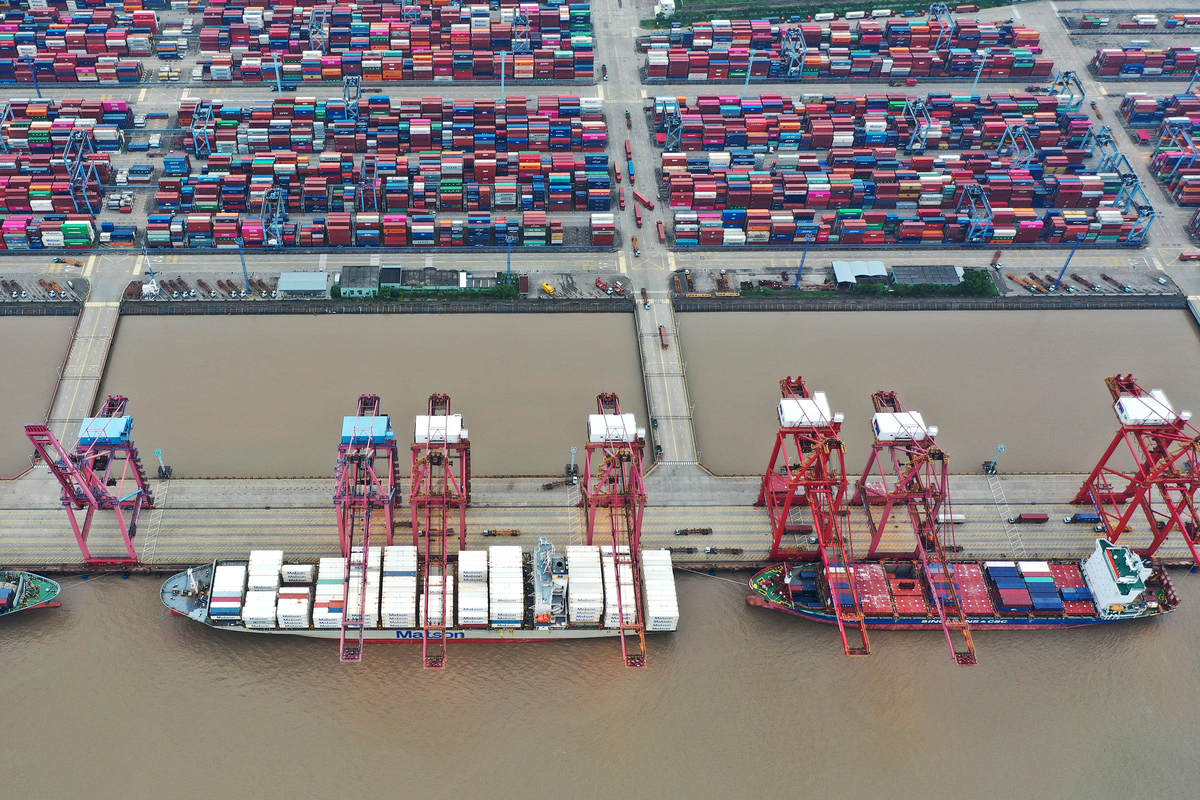 Container vessels are berthed at the Jintang port area of Ningbo-Zhoushan Port in Zhejiang province in July. [Photo by Yao Feng/For China Daily]

On the back of the country's successful control of the pandemic, Ying said China is set to see fourth-quarter GDP growth of 5.5 to 6 percent.

Looking ahead, Ying expected the global economy will enter a recovery period after the arrival of spring and summer next year and China will enter a post-pandemic era next year.

"By then, the key task is to continue to promote economic restructuring and pursue long-term-sustainable growth, and build the new model of dual-circulation, which will lay a good foundation for healthy and stable development in the coming five years," Ying added.

Experts said under the new "dual-circulation" development pattern, the country needs to work harder to better satisfy local needs and strengthen the industrial and supply chains, adding that a modern logistics system will help improve efficiency and provide strong support for the new development pattern.

Wang Yong, a visiting professor at the KTH Royal Institute of Technology in Stockholm, Sweden, spoke highly of the key role of China's logistics system in the battle against the COVID-19 pandemic, saying that building a modern logistics system is key to connecting consumers and producers.

"Entering a new stage of high-quality development and the new development pattern, we need to build a modern logistics system that is unified, open, competitive, safe and efficient, which will help boost the innovative development of industry and consumption," he said.

Wang Yong's views were echoed by Wang Changlin, president of the Academy of Macroeconomic Research of the National Development and Reform Commission, who said the construction of a modern logistics system is key to building a strong domestic market in the future.

According to Wang Changlin, it will help better satisfy consumers' needs for high-quality imported and domestically made goods and accelerate the push for industrial and consumption upgrades.

Ningbo-Zhoushan Port, with the world's largest cargo throughput for 11 consecutive years and ranking the third in global container handling capacity, has achieved growth despite the impact of the pandemic.

The company is estimated to have had a cargo throughput of 72.69 million metric tons last month and handled 2.85 million standard containers, 16.9 percent higher than October last year.

Statistics from the Ministry of Transport show that the Ningbo-Zhoushan Port handled 887 million tons of cargo from January to September, up 4.9 percent year-on-year.

During the period, 21.36 million standard containers were handled, a year-on-year increase of 0.5 percent, while overall national port container throughput dropped by 1.3 percent. 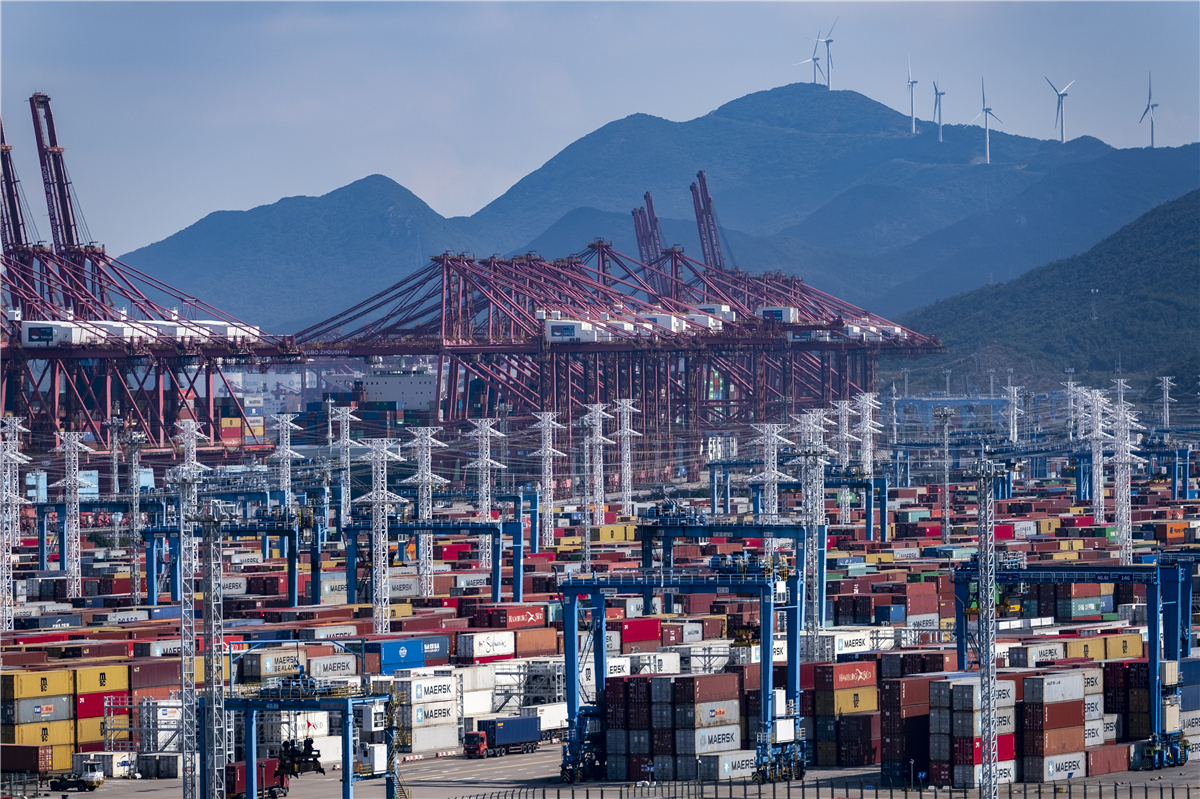 A view of the Jintang port area of Ningbo-Zhoushan Port in Zhejiang province in July. [Photo by Yao Feng/For China Daily]

The port has faced certain challenges resulting from the COVID-19 pandemic.

The port's team of maritime pilots, who have to get on board to serve ships and to guarantee the safety of sailing and docking ports, have been working intensively while also minimizing contact with others and taking anti-epidemic precautions.

In addition, shipments of frozen foodstuffs are strictly inspected. A number of recent cases of COVID-19 at other port cities in China have been related to the handling of imported frozen foodstuffs.

The strict measures and rigorous precautions taken by Ningbo-Zhoushan Port Co Ltd have paid off, with no confirmed or suspected cases found so far among its around 30,000 employees.

Hong Yongwu, deputy general manager of Ningbo Beilun No 3 Container Terminal Co Ltd, which operates in the Chuanshan port area, said Ningbo-Zhoushan Port had resumed around 90 percent of its business by the end of March.

On March 29, President Xi Jinping visited the Chuanshan port area, and said that its resumption of operations was of great significance in encouraging enterprises across China to resume work and production, as well in terms of restoring the logistics system and the global industrial chains.

At the beginning of the century, Xi, who was then the Party secretary of Zhejiang, promoted the integration of Ningbo and Zhoushan's ports.