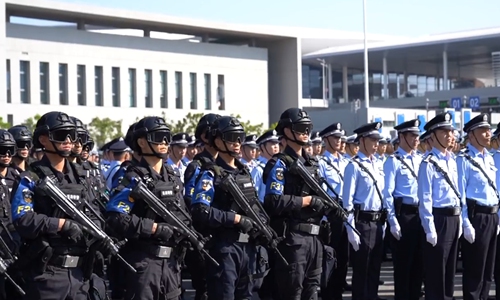 More than 1,000 police personnel from Zhuhai conducted an anti-terror exercise on Friday at the foot of the Hong Kong-Zhuhai-Macao Bridge Zhuhai Port, with police representatives from Hong Kong and Macao in attendance. (Photo: screenshot from Sina Weibo account of Zhuhai traffic police)

More than 1,000 police officers in Zhuhai, South China's Guangdong Province conducted anti-terror exercises on Friday at the foot of the bridge that connects the city to Hong Kong and Macao, as law enforcement representatives from Hong Kong and Macao witnessed the event that featured 80 vehicles, high-speed boats, drones and anti-drone technology.

The exercise started Friday morning at the Zhuhai Port of the 55-kilometer-long Hong Kong-Zhuhai-Macao Bridge, with local officials and police representatives from Hong Kong and Macao attending the event, Guangdong-based South Daily reported on Saturday.

With an order to start the drills from a leader on a podium, officers formed various formations simulating crowd control tactics. Riot police created a wall of riot shields, as those behind raised batons and readied their shotguns. Each squad raised a huge banner that read "Stop charging or we [will] use force" in Chinese and English, according to the video. A SWAT team is seen in a brief car chase which ends with a civilian car bumping into an armored police vehicle from which armed officers descend and capture the role-playing perpetrator.

Drones were deployed to gather information and shot projectiles at illegal drones.

The drills concluded with an oath-swearing ceremony, in which more than a thousand Zhuhai police personnel swore to safeguard the political security, social stability and the people's peaceful life, the South Daily report said.

This is not the first time a mainland city neighboring Hong Kong has conducted police drills. Another city in Guangdong Province, Shenzhen, held an exercise featuring 12,000 police officers and equipment including armored cars, helicopters and amphibious vehicles, in August.

The People's Armed Police also held a large-scale exercise in Shenzhen in August, as numerous armored personnel carriers and trucks were seen on expressways heading in the direction of Shenzhen prior to the exercise.