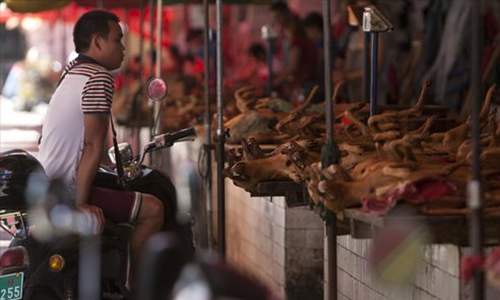 Zhuhai, another city in South China's Guangdong Province, following Shenzhen also in the province, has promulgated regulations to prohibit eating household pets such as cats and dogs, and violators shall be severely punished. The new rules will be effective from May 1.

Yong Ling, a legal affairs official with the commission of legislative affairs of the Zhuhai Municipal People's Congress Standing Committee, made the regulation public during a press conference on Tuesday, local media reported.

For animals to be counted as legally eligible, they have to meet three requirements - being enlisted in the national livestock genetic resources catalog, permission of food use by law, and qualification of quarantine inspection - Yong said, and cats and dogs do not meet such conditions.

Eating cats and dogs will result in a fine of up to 20 times the animals' worth, Yong stressed.

The wild animal consumers, and whoever organizes such feasts, and those who produce such animal food products will be also punished.

Also, online trade platforms, offline markets, supermarkets and those working in the related shipment line will be held accountable.

Shenzhen, which borders the Hong Kong Special Administrative Region, was the first Chinese city to ban the sale and consumption of dog and cat meat by banning the consumption of wild animals on April 2.

The city-level legislation in Guangdong came after the COVID-19 outbreak, which could be linked to eating wildlife meat, prompting the Chinese government to ban the trade and consumption of wild animals.

Yao Yue, campaign manager with Better Lives for Dogs under the Beijing-based World Animal Protection China Branch, believes that as the two cities have explicitly banned the consumption of cats and dogs, the trend is clear that eating companion animals is now considered unreasonable and wrong, which is in line with the Chinese public's mainstream opinion and views as well as those across the world.

Such regulations not only protect the animals, but also ensure human being's food security and well being, Yao told the Global Times on Wednesday.

Observers including Yao, also said that more provinces and cities would follow suit and roll out clear laws and regulations to forbid consumption of companion animals.

China's top legislature said in late February it was banning the trade and consumption of wild animals. Provincial and city governments across the country have been moving to enforce this.

Also, the country's Ministry of Agriculture and Rural Affairs said in a document introducing the new draft of the National Catalogue of Livestock and Poultry Genetic Resources, published on April 8 to solicit public opinion until May 8, that dogs are companions, not livestock, which has been widely seen by observers and the public as a major step toward putting an end to dog consumption in China.