Undeterred by the scorching morning heat late last month, an eager crowd encircled the leafy elephant enclosure at Zhengzhou Zoo, in the capital of Henan province, craning their necks and hoping to snap photos. 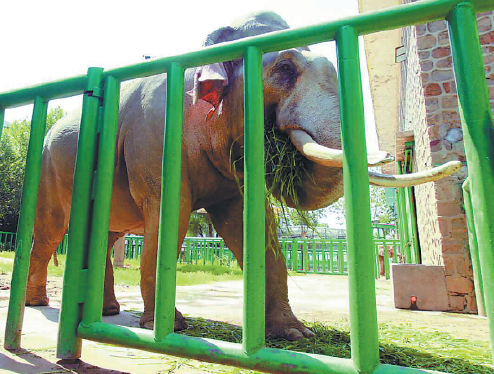 The lone star of the scene was an aging Asian bull elephant named Babu. The average life span of elephants is about 50 to 70 years, and Babu, age 40 and weighing 4 metric tons, was about to eat brunch.

Unlike other Asian elephants who are able to put food in their mouths by wielding their trunks, Babu has to begin by bending both his forelegs slightly forward, placing food between his short trunk and right foreleg, and then slowly lifting the food up high by gently curling his trunk before putting the food into his mouth.

"A part of the elephant's trunk is missing," exclaimed a boy sitting on his father's shoulders.

After living in Zhengzhou for 30 years, Babu has become a superstar at the zoo.

Twenty-two years ago, he injured his trunk when he was trying to impress a female neighbor by shaking an iron fence. The accident resulted in more than 40 centimeters of his trunk being amputated.

Yin Lei, who is in charge of the elephant enclosure at the zoo, said the trunk is essential for elephants.

"It's the animal's most versatile and indispensable tool, used for eating, communicating, touching, grasping, bathing and fending off attackers," Yin said.

The zookeepers were gravely concerned about how Babu was going to adjust to life after losing one-third of his trunk.

"He became very ill-tempered, cranky, and suffered from a loss of appetite," said Guo Xunji, a former elephant feeder.

To help Babu, Guo patrolled the elephant's enclosure and stuffed bananas and apples straight into his mouth when he was hungry.

After Babu's recovery, Guo started experimenting with ways to help the elephant feed himself.

He placed slices of fruit on a stool to shorten the distance between Babu's mouth and food, but several failed attempts at grabbing the fruit with his amputated trunk discouraged Babu, leading him to eventually give up and walk away.

Despite the setbacks, Guo kept trying. When the animal was in good spirits, Guo would scatter fruit in front of Babu and carefully guide the animal to use one of his forelegs to assist the trunk in picking up the fruit and putting it into his mouth.

"When we first started, Babu would fail eight out of 10 tries," Guo said. "Some visitors even got teary-eyed after witnessing the hardship the poor animal had to endure."

After six months' intensive training, Babu started to get the hang of it.

Babu also has trouble drinking enough water using his shortened trunk. Now, he is used to opening his mouth wide and letting water flow in from the pipe held by zookeepers.

With his feeding problem sorted out, the zoo started to focus on Babu's psychological health, especially after the premature death of his mate of nine years.

The arrival of two young Asian elephants provided the aging Babu with companionship humans were unable to provide.

"Babu may seem a little aloof when he's outside, but he's a real talker when he meets the two youngsters inside the room," Yin said. "Sometimes he even plays with them by spraying water from his trunk."

As Babu's digestive ability continues to deteriorate, the zoo has started giving him dietary supplements. Yin said the elephant now consumes 15 steamed buns rich in bone powder, 15 kilograms of carrots and 100 kg of grass a day.

"With the excellent care we provide, I sincerely hope our old friend will live the rest of his life peacefully in our park," said Chen Jing, the zoo's director of public relations.