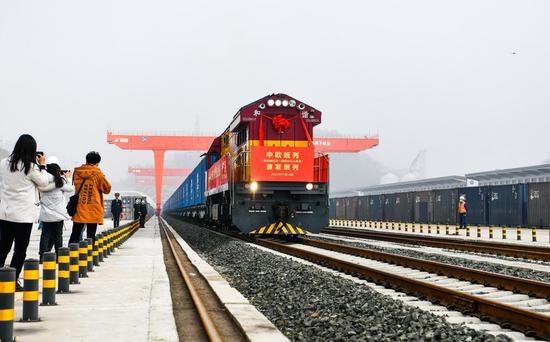 Chinese Premier Li Keqiang, while addressing the 13th Asia-Europe Meeting (ASEM) Summit, called on Asian and European countries to uphold the spirit of mutual respect and cooperation for common development and prosperity.

This year marks the 25th anniversary of ASEM, and the past two-and-half decades have seen a steady expansion in ASEM membership, continued increase in political mutual trust, and sustained deepening of exchanges and cooperation.

To strengthen ties between Asia and Europe, China has made persistent efforts to increase regional connectivity and facilitate cross-border trade over the decades.

As the world is recovering from a pandemic of unprecedented magnitude, China, a major economy in Eurasia and a champion for multilateralism, plays a prominent role in boosting Asia-Europe cooperation.

China and Europe share not only significant mutual interests but a common ground in safeguarding multilateralism and free trade as well as pushing forward economic globalization.

Data from Eurostat, the European Union (EU)'s statistical office, showed that China became the EU's largest trading partner in 2020. Amid the COVID-19 disruptions, China was the only country that saw two-way growth in trade with the EU last year among the bloc's top ten trading partners.

Trade between China and European countries remains robust as the pandemic continues to weigh on the global economy. The bilateral trade volume reached 599.34 billion U.S. dollars in the first nine months of this year, soaring 30.4 percent from a year earlier, according to China's Ministry of Commerce.

With its opening-up policy and economic resilience, China has become a stable destination for European investors. According to a survey released by the European Union Chamber of Commerce in China in June, 75 percent of respondents said they had either maintained or seen increased revenue in 2020 compared with the previous year, with steady profitability.

The resilience of the Chinese market provided "much-needed shelter" for European companies amid the storm of the COVID-19 pandemic last year, the survey noted.

-- How does China play a part?

China put into operation the China-Europe freight train service in 2011, which has since served as a crucial link for trade and economic cooperation across the Eurasian continent.

Now, a decade on, the rail service has over 70 routes reaching more than 170 European cities. It is playing a vital role in stabilizing international logistics and improving regional connectivity.

These trains have played a crucial role in anti-pandemic cooperation. Epidemic-prevention materials transported via the China-Europe freight train services since 2020 have exceeded 13 million pieces.

Apart from boosting intercontinental transport infrastructure, China, as the world's largest trader of goods, has set up platforms at various levels for Asian and European countries to showcase their merchandise and, more importantly, share China's market opportunities.

One of the latest examples is the (China) Eurasia Commodity and Trade Online Expo 2021 held in August, which attracted 1,323 exhibitors and 1,865 buyers from 25 countries. The expo has become an important platform for promoting economic cooperation, trade, and exchange among Asian and European countries since its inception in 2015.

-- What to expect from China in the future?

Speaking at the ASEM summit, Li called on countries to speed up economic restructuring toward a green and low-carbon mode of growth.

In regards to China, he said that the world's largest developing country needs to make "painstaking efforts" to realize low-carbon development and a green transition in its endeavor toward modernization.

"We need to strengthen exchanges in education, culture, tourism, sports and between think tanks and media organizations, and develop an all-dimensional, deep-going and multi-channel cooperation framework, to enhance the affinity between our peoples," Li said in his speech.

The Chinese premier stressed that China, accordingly, will continue to support the Asia-Europe Foundation and foster communication among young leaders from Asia and Europe.

With concerted efforts, China and the EU, both influential Eurasian economies, have reached a consensus involving various spheres in the recent two years. The economic and trade cooperation between Asia and Europe is thereby marching toward brighter and broader prospects.

The two sides concluded negotiations on the China-EU investment agreement last year. Chinese State Councilor and Foreign Minister Wang Yi said that the deal is among the latest moves by China to achieve a "higher level of opening-up" and reduce its market access barriers.

Furthermore, a bilateral agreement between China and the EU on geographical indications (GI) came into effect in March. It has brought 100 GIs from each side, involving liquor, tea, food and farm produce, under protection, and is expected to promote the trade of related products.

The second GI list, consisting of 175 GIs from each side, is set to go through protection procedures within the next four years.