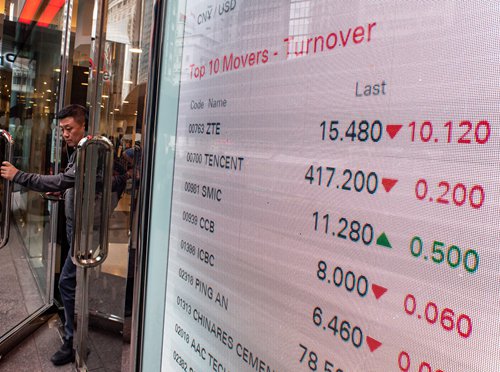 A man walks out of a bank as ZTE appears on a list of top movers on the Hang Seng Index in Hong Kong on Wednesday. Shares of the Chinese telecom equipment maker shed 41 percent on Wednesday as trading of the company's stocks resumed after it reached a settlement with the US over its handling of a sanctions violation. (Photo: AFP)

Chinese telecom giant ZTE Corp's shares tumbled on Wednesday during their first day of trading after a nearly two-month suspension, as the company recovers from a crippling US ban but faces severe punishment.

In the Chinese mainland, the company's shares plunged 10 percent to 28.18 yuan ($4.40) per share and trading was suspended for the day. According to market regulations in the mainland, stocks are only allowed to trade 10 percent lower or higher than the previous closing price each day.

"This is the market responding to events in the past two months that almost crippled the company," Fu Liang, a veteran telecom industry expert who runs a popular blog, told the Global Times on Wednesday. "Trading was suspended so the market didn't get to respond."

ZTE suspended trading of its shares on April 17, after the US decided to block American   companies from supplying it crucial parts, including microchips, citing alleged violations of US sanctions.

In a filing to the Hong Kong Stock Exchange on Tuesday night, ZTE said that it had reached an agreement with the US Bureau of Industry and Security. Under the agreement, ZTE was ordered to pay fines totaling $1.4 billion and to replace its entire board of directors and senior leadership.

Fu said that the punishment was "much harsher" than he had expected. "The biggest problem for ZTE is to replace its entire management team. That would have a huge impact on the company's future," he said. "Finding a new team that could restore the company's credibility and win public trust is not an easy thing to do."

There are still many uncertainties for ZTE, including replacing its management team and the final execution of the settlement reached with the US. According to media reports, some US lawmakers are trying to force US President Donald Trump to back away from the agreement.

However, if things go well for ZTE, the company still holds  great potential not only in China but globally, experts noted.

"While $1.4 billion is not a small number, it significantly lowered risks for [ZTE's] 5G supply chain and restored stability in [its 5G] deployment cycle," Gu Haibo, an analyst at CITIC Securities, wrote in a note on Wednesday, adding that ZTE could still be well positioned for a "trillion-dollar" 5G market.

While China is already at the forefront on 5G technology research and development, microchips have proven to be a major issue for Chinese companies and the ZTE saga has prompted a barrage of plans from the government to urge companies to focus on chip development to cut reliance on overseas supply, experts noted.

"After the ZTE incident, it has become very clear that China would definitely put more efforts into developing its own chips," Liu Kun, vice general manager of the IC Industry Research Center at CCID Consulting, told the Global Times. "China is aiming for breakthroughs in areas such as technology and applications… and such a great environment with favorable government policies would definitely yield some great results."