The Islamic Republic of Afghanistan

Afghanistan is a landlocked mountainous country with plains in the north and southwest. Afghanistan is located within South Asia and Central Asia.

Despite having numerous rivers and reservoirs, large parts of the country are dry. The endorheic Sistan Basin is one of the driest regions in the world. 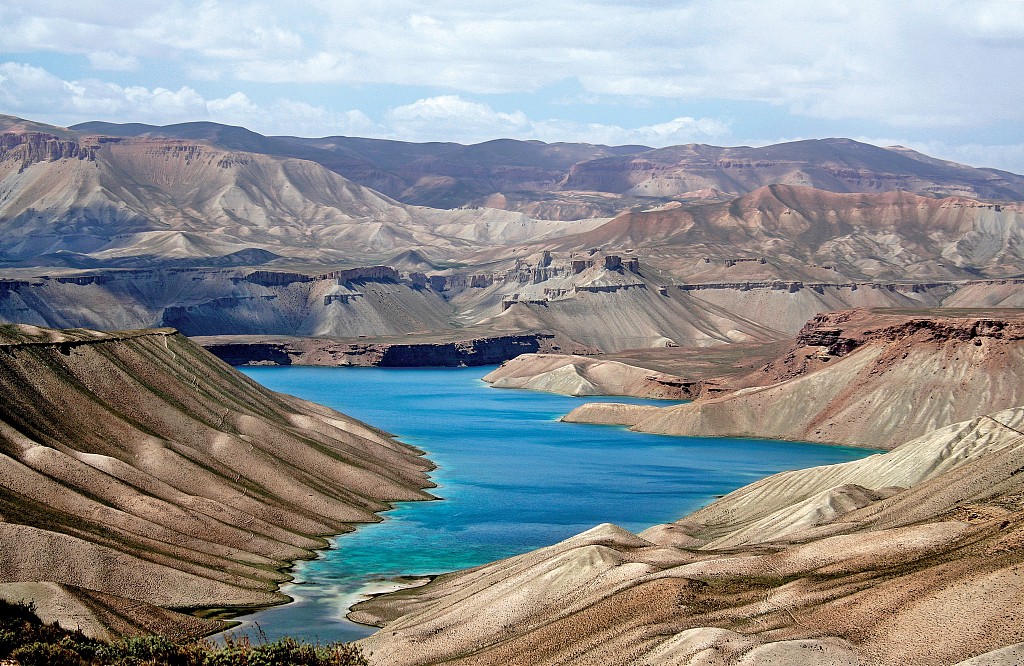 Afghanistan is one of the least developed country in the world. Agricultural production is the backbone of its economy. According to a 2007 assessment, Afghanistan has significant amounts of undiscovered non-fuel mineral resources.

The economy of Afghanistan has had significant improvement in the last decade due to the infusion of billions of dollars in international assistance and remittances from Afghan expatriates.

• Lower house: House of the People

Afghanistan is a unitary presidential Islamic republic with a population of 31 million, mostly composed of ethnic Pashtuns, Tajiks, Hazaras and Uzbeks. Its politics consists of the council of ministers, provincial governors and the national assembly, with a president serving as the head of state and commander-in-chief of the Afghan Armed Forces.

● On January 20, 1955, China and Afghanistan established diplomatic relations. Abdul Samad was the first Afghan Ambassador posted to Beijing in 1955. Afghanistan was also one of the first countries to recognize the PRC.

● In June 2006, the two countries signed the Treaty of Good-Neighborliness and Friendly Cooperation Between the People's Republic of China and the Islamic Republic of Afghanistan. They agreed to abide by the principles of the treaty and continue to enrich the partnership of all-round cooperation for the benefit of the two countries and their peoples and in the interest of peace, stability and development in the region.

● In January 2008, Afghanistan's first Confucius Institute was established at Kabul University. During the Afghan president's visit to China in March 2010, China announced that it would provide Afghanistan with 50 government scholarships each year starting from 2011. During President Ghani’s visit to China in 2014, China announced that it would provide 500 government scholarships to Afghanistan in the next five years.

● On June 8，2012，leaders of the two countries agreed to upgrade bilateral relations to the level of a strategic and cooperative partnership.

● In 2013, the strategic and cooperative partnership between the People's Republic of China and the Islamic Republic of Afghanistan further deepened. The two countries enjoyed growing strategic mutual trust and sustained progress in cooperation across the board. The Chinese government supported the process of peaceful reconstruction in Afghanistan and continued to provide assistance to Afghanistan to the best of its capability.

● In 2013, China continued to provide free assistance to Afghanistan, and Afghan projects with Chinese assistance were advancing steadily.

● Bilateral trade volume reached $544 million in 2017, up 24.9 percent year-on-year. By the end of 2017, a total of $1,281 million worth of project contracts have been signed in Afghanistan, with a total turnover of $1,102 billion mainly in the infrastructure fields such as communication, transformation lines building, highway construction and housing construction.

● China has taken an active part in Afghanistan's peace reconstruction, building a number of livelihood projects for Afghanistan including the water conservancy restoration project and the Jamhuriat Hospital, and helped train more than 2,000 Afghan professionals in various fields through bilateral and multilateral channels.