Full Name: The Republic of Ecuador

Politics: In April 2017, Moreno, candidate of the ruling party PAIS Alliance (Proud and Sovereign Fatherland), was elected in the second round of the election with 51.16% of the vote and took office in May. Since the inauguration, Moreno has made anti-corruption talks and dialogue with the opposition and various industry organizations a priority of its governance He ignited a feud with ex-president Rafael Correa, increased input in people's livelihood, and launched social programs and received a lot public support. The situation on the northern border of Ecuador has become worse since 2018. In February, Moreno’s constitutional referendum was approved by a large majority.

Economy: Ecuador is a relatively backward country in South America, with a weak industrial base and slow agricultural development. The oil industry is the main pillar of Ecuador’s economy. Economic development in Ecuador can be divided into three periods: the cocoa period, banana period and oil period. Ecuador once was known as the "Banana Country" to the world. Since 1992, it has ranked first in banana output and export volume in the world.

The friendly and cooperative relations between the People's Republic of China and the Republic of Ecuador grew smoothly in 2013.

The two countries maintain high-level exchanges. In March 2013, NPC Vice Chairman Chen Changzhi led a delegation to Quito, capital of Ecuador, for the 128th Assembly of the Inter-Parliamentary Union (IPU) and met with the president of the National Assembly Fernando Cordero. In April 2013, President Cordero of the National Assembly visited China and held talks with NPC Chairman Zhang Dejiang. In May 2013, Chinese Minister of Water and Resources Chen Lei attended the inauguration ceremony of Ecuadorian President Rafael Correa as special envoy of the Chinese government. In November 2013, Ecuadorian Minister of Foreign Affairs and Human Mobility Ricardo Patiño Aroca paid an official visit to China and co-chaired the seventh political consultations between the two foreign ministries with Foreign Minister Wang Yi.

Chinese President Xi Jinping held talks with Ecuadorean President Lenin Moreno at the Great Hall of the People in Beijing on Dec 12, 2018, calling for the healthy and steady development of the bilateral ties. 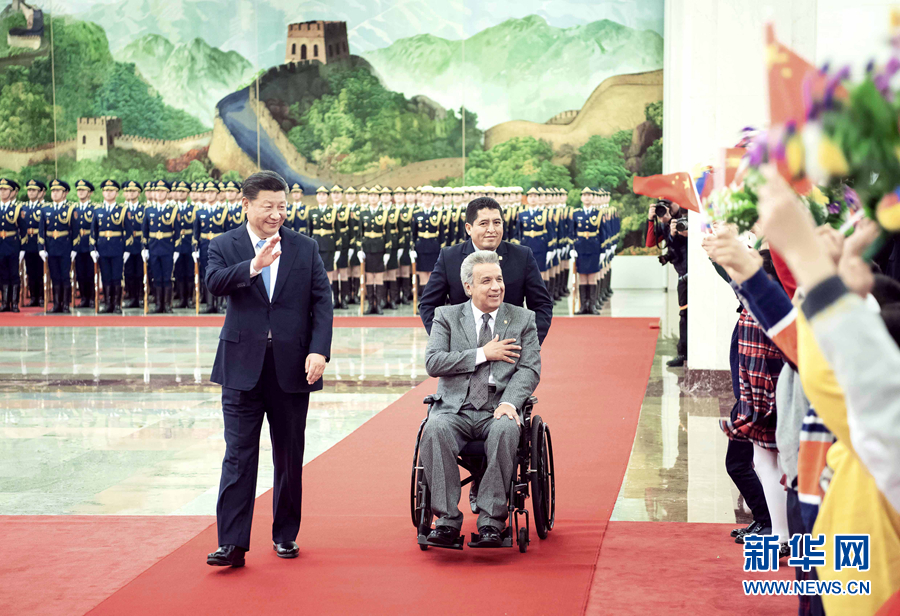 Noting that Ecuador’s participation in the construction of the Belt and Road is welcomed by the Chinese side, Chinese President Xi Jinping expects the two sides to jointly promote cooperation in areas such as infrastructure, production capacity, agriculture, information technology, new energy and environmental protection.

Economic cooperation and trade was strengthened. CRCC-Tongguan Investment Co Ltd signed an investment agreement with the Ecuadorian side on the Mirador copper mine project. The Export-Import Bank of China and the Ecuadorian side signed a financing agreement on Minas San Francisco hydro power station. A carrier rocket carrying a small satellite made by Ecuador was successively launched at China's Jiuquan Satellite Launch Center. The two countries signed the Air Services Agreement and the Agreement for the Avoidance of Double Taxation and the Prevention of Fiscal Evasion with respect to Taxes on Income.

Ecuador has received its first fleet of Chinese-made electric buses designed to modernize urban public transit and improve sustainability in Guayaquil, the country's main port and second most populous city, with some 2 million residents on February, 2019.